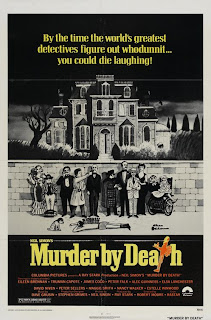 “If you ask me, anybody that offers a million bucks to solve a crime that ain't been committed yet has lost a lot more upstairs than his hair”
Last night I was home with my parents (yes I have no life) and my dad had the remote so needless to say we were not really watching anything. He decided to look through the free movies on On Demand. There were so many that I would love to have sat through but I was not in control of the remote. Going through the comedy section he came across Murder by Death. I had heard of this film but I had never seen it so I told him to put it and so did my mom and when she says she wants to watch something my dad usually puts it on. Right from the credits I knew it was going to be good.
A man named Twain (Truman Capote… yeah that’s right the author. He was a creepy bugger) has the world’s greatest detectives all come to a dinner party at his house. The detectives are Sidney Wang (Peter Sellers) and his son Willy, Dick Charleston (David Niven) and his wife Dora (Maggie Smith), Milo Perrier, Jessica Marbles Elsa Lancaster), and Sam Diamond (Peter Falk) and his secretary/lover Tess Skeffington (Eileen Brennan). They all arrive at the house and when they each ring the door bell it is not a bell but an ear splitting scream that sounds like someone is being murdered. And before they can step into the house they are all almost killed by a falling gargoyle. Oh on top of all the insanity the butler Bensonmum (Alec Guinness) is blind as a bat.

The night and the people grow odder and odder. The cook hired for the evening is a mute and cannot hear so Bensonmum winds up bringing nothing to the table but clean dishes. The lights go out and flicker in odd colors and their host appears. Twain tells all the detectives that one of them will die by the end of the night. When Twain leaves they all panic.

I do not want to tell too much about the movie because it is so funny and so silly. There are so many funny lines and scenes and the characters just become more and more outrageous as the movie progresses.
Once I figured out that Murder By Death was a parody of all different detective stories and that all the characters were based off of famous detective characters I enjoyed so much more. My favorite detective parodies were Dick and Dora Charleston who were supposed to be Nick and Nora Charles from The Thin Man (Are you shocked about this if you follow my blog? I thought not) and Sam Diamond and Tess Skeffington who were supposed to be Humphrey Bogart and Lauren Bacall which I got right off the bat (and let me just say that Eileen Brennan was perfect to play a Bacall-type character). At the end Diamond almost says one of the best film lines of all times as originally said by Lauren Bacall in To Have and Have Not “you do know how to whistle don’t you?” and then he gets frustrated and does not say the entire thing haha. I got a little weirded out seeing Alec Guinness as a character that was not Obe Wan from Star Wars. Marble and Perrier are based off Agatha Christie’s characters Miss Marple and Hercule Poirot. Sidney Wang and his son are from the Charlie Chan series.

Some interesting trivia courtesy of IMDB: Myrna Loy was offered the role of Dora Charleston but she declined because she said it would be “Myrna Loy playing Myrna Loy” and she did not want her “ass pinched by David Niven.” I can understand her not wanting to play herself pretty much but I think that would have been cool to see her play Nora Charles with a twist. Maggie Smith was very good as Dora though and you can see where they tried to make her look like Nora/Loy. And I read that Loy and Niven were friends but I guess he liked pinching her behind! The character of Nurse Withers, who is Miss Marbel’s guest, was supposed to be a woman named Dame Abigail Christian to be played by Katharine Hepburn but once Hepburn learned that Myrna Loy backed out she backed out too. What a crime that these two incredible actresses backed out that would have been awesome to see them together in a film. The scream when the door bell was rung was Fay Wray’s scream from King Kong.
Murder by Death is a hilarious movie. If you know your murder mystery films or stories you will love it. A part in the ending is the best when Twain yells at all the characters for the way their mysteries and hits the problems with them very well on the head. Even if you do not know your detective stories well it is still funny watch. If you like Clue or spoof movies (and I mean the Mel Brooks good kind not the crappy ones from today) you will like Murder by Death.

Posted by UneCinephile at 11:16 PM