“In my profession there is neither good nor bad. There is innocence and guilt. That's all.”

Today is the last day of Noirvember! I have had a lot of fun participating in watching great Film Noirs. I chose to watch Film Noirs that I had never heard of before and it has been interesting to watch them. Some of the films have been grittier than the more popular/well know ones and I liked seeing that. To end Noirvember I have chosen Odd Man Out from 1947.
Johnny McQueen (James Mason) is part of an organization in Northern Ireland dedicated to creating chaos to try to bring about peace from political unrest. He has escaped six months previous and has been holed up in the house of a young woman named Kathleen. The organization Johnny works for wants him and a few other men to rob a mill to get money to finance their next attack. Some of the men do not think Johnny is up to the task. Since his escape he has become interested in negotiating rather than attacking. He tells one of the men that he is still up to the task.

The robbery, of course, goes wrong and they are pursued by an armed clerk. Johnny gets into an altercation with the clerk and is shot in the shoulder. He shoots the clerk. Johnny manages to jump into the fast moving car but the driver makes too sharp a turn and Johnny is thrown from the car. He manages to get up and walk away and hide in a basement somewhere.

Now the entire town and all its police force are looking for the seriously injured Johnny. Johnny manages to deliriously walk around the town and get around a few places until he has to be moved over and over again. 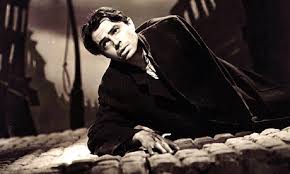 I was not a huge fan of Odd Man Out. The story was different for a Noir since it dealt with a man who was guilty of killing someone. Typically, Noirs deal with a man who has been falsely accused of a crime and has to prove his innocence. We root for the character to get away and have a happy ending with a girl. I actually found myself rooting for Johnny to get away and not be caught since he was hurt and because he was hallucinating and also because the other characters were a bit annoying (if that makes any sense). There was just something about either the story or its length that turned me off a bit. Odd Man Out visually and stylistically was a great film. Carol Reed directed this film and two years later would go on to direct the famous Orson Welles Noir The Third Man. Both films make fantastic use of light and dark and shadows to create atmosphere and add tension and desperation. Odd Man Out, despite me not really liking the story that much, is a very good Film Noir visually and one I recommend seeing if you like Noirs.
Posted by UneCinephile at 9:29 PM No comments:

“That was a sucker move, burning down your boss. You had him all wrong. He never crossed you.”

Heist films I find can either be typical or very different. Some heist films throw in good twists and have interesting characters and some can be drawn out and boring. Kansas City Confidential is a heist told in the Film Noir style so of course it is going to be the different kind.
A man looks out the window of an apartment through binoculars at a bank across the street. He takes note when the armed guards go to the bank to exchange the money and how long it takes them enter and exit the building. He next calls a gambler named Pete Harris to meet at a certain place. The man has Peter call him Mr. Big and he has a mask over his face. Mr. Big blackmails Peter into doing the job with him. He does the same thing to two other men- Tony Romano and Boyd Kane. Only he is to know what everyone looks like so none of the other men can rat each other out if they are caught.

The four crooks rob the bank disguised as workers for the florist who is usually at the building next to the bank almost every day at the same time the guards are. As they are running out of the bank after the heist a cop is shot and killed. Mr. Big and the other men drive the florist van into a larger truck and get away out of town. The police pull over a florist truck from the same company that is being driven by Joe Rolfe. They thoroughly believe Joe is part of the gang who robbed the bank especially because he had been in jail for a while on a gambling charge. One detective is so convinced Joe was a part of the robbery that over a period of days he roughs Joe up to get a confession. Finally, Joe is released when another detective cannot find anything connecting him to robbery.
While sitting in a bar run by a friend a man comes in with some news on the real robbers. The man tells Joe that they are all in Mexico and that is where Joe heads. 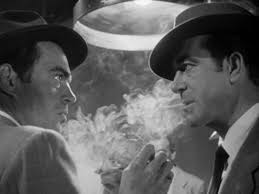 Posted by UneCinephile at 8:03 PM No comments:

“I wish so much crime didn't take place after dark. It's so unnerving.”

I find stories with women seducing men to get them to do whatever they want kind of interesting. Men falling all over themselves for a beautiful woman boggles my mind. I am not really jealous of women who can get men to do whatever they want for them I usually just wind up feeling bad. Most of the famous Film Noirs have femme fatales who twist men around their fingers and bend them to their will. The File on Thelma Jordon is exactly that kind of story with exactly that kind of woman.
Cleve Marshall (Wendell Corey) is the assistant District Attorney. He is in his office late one-night drinking to work up himself up to go home to his wife that he does not really love anymore. A woman named Thelma Jordon (Barbara Stanwyck) comes into his office. She needs someone to help her with her aunt. Her aunt is going crazy thinking someone is after her and trying to rob her house. Cleve asks Thelma why she does not go to the police and she says that her aunt does not like uniforms.
Instead of both of them going home they go out to dinner and, big surprise, they both fall in love with each other. Cleve and Thelma cannot be seen together so they sneak around. She gets Cleve to come to her at a moment’s notice.  He always picks her up along the road to her house where she lives with her aunt. When Thelma is supposed to be out the aunt wakes up when she hears someone in the house. She goes downstairs and there is someone in the house. The aunt is shot and killed. Thelma never got too far from the house and finds her aunt dead. She calls Cleve before the police come to the house. He wipes down all the evidence that Thelma was there.
The police eventually arrest Thelma on murder charges and Cleve does whatever he can to avoid her having to go to jail. The police know there was another person at the house but Thelma will not tell them that the other person was Cleve. Thelma beats the murder charges but her ending comes in the form of a former flame who will not leave her alone.
Of course Cleve cannot go unpunished and he confesses that he was the other person at the house the night the aunt was murdered.

Posted by UneCinephile at 9:27 PM No comments: