“You all want to know the secret formula for getting in. To do your job well, an admissions officer must be on the receiving end of an entire nation's application panic, endure the frustration of all the parents who just realized there isn't room for every organically-fed, well-tutored offspring. Of course everyone thinks we're sadists, that we like saying no. We are in this job for one reason, to say yes.”

When I was applying for college nine years ago (damn I just made myself feel really old!) I did not go into panic mode like some of my friends. I wanted go my community college (which was voted one of the top five community colleges in the country) for two years then transfer to a university. I mostly wanted to go to community college first because I could have cared less about scoring high on the SATs. Plus, I was not ready to leave home. Then seven years ago I applied for Montclair State University and fortunately without a problem I got into that school. Even graduate school I got into the school I wanted without issue. I never went nuts applying for schools. Well, I will say I was little nervous that my application was light because I was bum I did not do any extracurricular activities or any sports but apparently that does not matter to any of the schools I went/go to.
In the movie Admission thousands of students apply to get into Princeton University. Princeton is an Ivy League school and all the smartest kids in the nation apply every year. It is up to the admissions office to go through every application and choose exceptional students that will add to Princeton’s legacy and reputation. Working in the admissions office is Portia Nathan (Tina Fey). She has been at Princeton as an employee for sixteen years. She does her job well and seems to enjoy it. She even has a boyfriend who is a professor on campus. 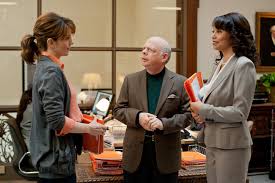 One day the Dean of Admissions announces that he is retiring and that Portia is one of the people in the running for his job. In order to get more admissions applications Portia travels to a new school called Quest that is run by a man named John Pressman (Paul Rudd). The school is like an alternative high school where the students are not kept in an actual classroom and are encouraged to think and speak freely. After her presentation John tells Portia he knows her from when they were at Dartmouth together and needs to talk to her about something but she keeps brushing him off.
The visit to the school and meeting John and his brightest and unconventional student Jeremiah, Portia’s life is thrown for a complete loop both personally and professionally. John tells her he thinks that Jeremiah is her son she had in college and gave up. Portia does everything she can to make sure that Jeremiah gets into Princeton like he wants even though he was not a stellar student.

I loved Tina Fey and Paul Rudd in this movie together. They made an interesting couple. When I think of them I think of their comedies, I think of Liz Lemon and I think of Rudd being in Our Idiot Brother as a stoner. I believe that their comedy helped them to be somewhat serious in this movie because you can see they are both a bit awkward being dramatic (or at least it looked like they were awkward to me). I give Tina Fey a lot of credit because she always does silly comedies and then to do a somewhat serious role where she has to show emotion she did fantastic. I wish she would make more movies like this. Paul Rudd is just awesome he gets better and better every movie I see him in.

Lily Tomlin plays Portia’s feminist mother. She is hilarious from her first scene to the last. I would not mind seeing her play Fey’s mother in something else.
One of my grad school teachers works at Princeton in the archives. He told the class that when Admission was filming on the campus Tina Fey would take a break from filming and say hello to the people waiting and sign some autographs. One of his friends brought his young son and the son met Tina Fey. After that the son said he wants to go to Princeton and the father told him “You know Tina Fey isn’t always here” and the son paused then said again “I want to go to Princeton”. Ha ha.


Admission is a very good movie. The story is sort of predictable and sort of not. You think you know where some of the plot is going and then it goes somewhere else. The acting is very good and the story is different. Highly suggest seeing Admission, especially if you are currently applying to colleges. 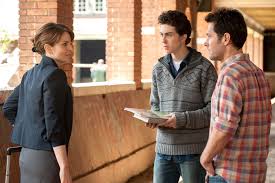