“Why don't you van go fuck yourself."

Stories dealing with stolen art are some of my favorites. I have a degree in Art History and museum studies. Besides movies and music, art and museums are my life passions. I always get a kick out of hearing art references in movies or if a story is dealing with art heists and mysteries. Usually stories dealing with art heists are serious dramas or thrillers they are not a lot of comedies (well, to my knowledge at least). There are not a lot of comedies are stolen art especially when it comes to movies geared towards young adults. But there is one movie that deals with stolen and forged art that is geared towards young adults called Bad Night starring two YouTube vlogging stars Jenn McAllister and Lauren Elizabeth.
Best friends Abby (McAllister) and Kate (Elizabeth) go on a Saturday morning trip with their AP Art History class for extra credit. On their way home the small group stops for lunch. Back on the bus everyone, including the teacher and the driver, get major food poisoning and get majorly sick everywhere. The bus driver refuses to rid back to school in the condition he and everyone else is in. Kate does not want to stay in the hotel room despite the teacher telling the students they cannot go out anywhere they all have to stay in their rooms. Kate is in a mood because her parents told her they cannot afford to send her to college so all she wants to do is go out and have some fun with the credit card her parents gave her for emergencies.

On the other side of this story is a crooked foreigner and criminal named Ari (Matt Walsh). He has gotten in touch with two famous art thieves who are supposed to be delivering a lost Van Gogh painting. He has a guy who goes by Wheels to pick up the female art thieves to drive them wherever they need to go. 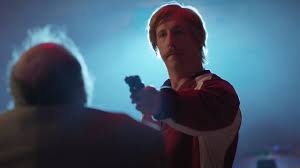 Kate calls a car to come pick them up and gives the driver the name Monarch and Viceroy instead of their actual names. When they go out to the car they kind of get into the wrong car. They wind up getting into the car that Wheels is driving. Turns out the thieves are known by their code names that are also Monarch and Viceroy and they get into the car that Kate and Abby were supposed to be taking.
Abby and Kate started off having a good time going to the goodwill store to get different clothes then going out to dinner to a fancy restaurant. The real Monarch and Viceroy, despite not having a real getaway driver, they manage to get a copy of the Van Gogh painting. Eventually, both parties realize they have the wrong drivers and their night gets a little crazy.
I did not know what was going to happen in the story of Bad Night. I recently read Jenn McAllister’s book Really Professional Internet Person and she talked filming it and what input she and her friend Lauren Elizabeth had with it. After reading the book I was very interested to watch Bad Night and I have to say I was surprised by how good it was. I enjoyed it as a not so serious movie. As I said at the beginning I love when there is a story about stolen art and this was pretty funny. The Van Gogh they were looking for was not an actual Van Gogh painting but it was hilarious. I had no idea Matt Walsh was in the movie so I was pleasantly surprised and very happy to see him. McAllister and Elizabeth were not bad actresses at all. McAllister wrote in her book that she always wanted to act and that this was her first time doing so. I was not expecting her acting and Elizabeth’s acting to be that great so see them actually acting and not sucking was awesome.


Bad Night is an enjoyable movie. I feel the story did not get out of hand with being silly or ridiculous. The humor was perfect. The direction by Reidel brothers was great too. I have seen one of their other movies which was also a comedy and I like their direction a lot because they do manage to keep the comedy from getting out of hand. Bad Night is a fun movie that I suggest seeing especially if you are into watching YouTuber movies.
Posted by UneCinephile at 12:00 PM