﻿
Made for Each Other was one of the over 500 films made in 1939. Compared to the dozen or so classic films which came out that year this one does not stand out in any grand way. But what Made for Each Other lacks in grandeur is made up by how real and true to life the story is.
John Mason (James Stewart) works in a law firm where he has done pretty well for himself over the years. He has dreams of making partnership and making money to be comfortable. Judge Doolittle- John’s boss and head of the law firm- sends John to Boston to look up a case file. While in Boston John meets a woman named Jane (Carole Lombard). They quickly fall in love and marry immediately. The first time the audience sees Jane is when John brings her over to meet his mother. John’s mother does not know that the two of them are married. Mrs. Mason likes Jane but she does not approve of John marrying her. As John tries to tell his mother the best he can that he and Jane are married Jane comes right out with and says it. Mrs. Mason has a bit of a dramatic panic attack at this news. As Mrs. Mason goes up to her room, John and Jane agree that she can come live with them.
Jane and John for their honeymoon decide to go to Europe for two weeks. John has been working on an important case in which he knows a lot about. Before he left he made sure to get a continuum so he would not have to rush back. John and Jane are on the ship with ten minutes left to leave when a man John works with, Conway, comes on board telling John that the case will go ahead next week that the continuum did not work; it’s either the case which could make John’s career and make him a partner or screw things up by going on his honeymoon. The couple stands on the deck waving goodbye with a crowd of people to the leaving ship.

The couple, along with John’s mother move into a small apartment. They are having Judge Doolittle, his daughter, and Conway over for Thanksgiving. Things are not going smoothly at all: Mrs. Mason is driving the maid out of her mind to the point where she wants to walk out and she’s also driving Jane up a wall telling her what to do. John has been out trying to find a bottle of wine which is does but it is not enough to last the whole evening. Dinner did not over how Jane and John had planned: the maid wanted to leave and needed to be paid so John had to get up and find money for her and Judge Doolittle told John that he was giving the partnership to Conway not him even though he won the case he was working on.
The next scene is Jane finding out she’s pregnant. She writes John a little letter (she did this at the beginning when John went back to work even though she was married and living with him) in the style of a poem with a baby pin attached to the paper. She goes to the court where John is and when the court lets out for the day she gives John the letter. When John reads the letter he is very excited, they hug each other in happiness.
A few months later, Jane and John have a baby boy. They get into a taxi at the hospital to go home. Jane stares amazed at the baby and keeps asking over and over again “Isn’t he beautiful?” A mounted police officer comes by to see why the car has not moved yet when he looks through the roof from the window and sees the new parents and their baby. He says he’s sorry for being loud and then yells at the other cars to move along and to be quiet! 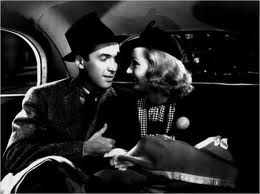 ﻿
At home Jane tries to give baby Johnny a bath and Mrs. Mason is yet again telling Jane what to do. The baby’s clothes are hanging on a string in the bathroom to dry make the room even smaller and crowded then it already is. John keeps asking if he can do anything which makes Jane more frazzled. Jane sends John to get the baby a bottle, when he comes back he tries to feed the baby by making him hold it but obviously newborns cannot hold their bottles so Jane takes over.
Times are getting harder. Jane encourages John to demand partnership and a raise from his boss. To pep John up Jane asks “Are you a man or a mouse?” to which he answers “A mouse.” He is up all night going over what he will say to Judge Doolittle; Jane sees this as she lays bed and has a proud look on her face. The next day John goes to Doolittle to tell demand his raise but Doolittle tells him some bad news: everyone, including himself, will be taking a 25% pay cut due to hard times. That night John comes home drunk, slamming the front door, turning the lights on waking the baby who unfortunately has to sleep in the dining room, and dropping the milk bottle in the kitchen. Jane doesn’t get mad at him she knows what has happened instead she tells him good morning since it is 3am and asks him if he’s comfortable once he goes to bed because he still has his shoes on. As she takes off his shoes, John starts going into a drunken rant about how he can never get any peace and quiet when he comes home. When he’s done, Jane tells him that she ran into Judge Doolittle and knows he did not get the raise. She calls him a fool and tells him she loves him no matter what that money is not all that matters. She feels bad that she made him go to Judge Doolittle and nothing came of it. He says to her that he’s no good for her and that he has let her down.
Now the bills are piling up and notices are being sent out to the couple. Stress is getting to the both of them now. Jane sits in a park with their maid Lily. Jane tells Lily that she may have to her let go but Lily says she will stay no matter what. Lily tells a great metaphor: a watermelon is life it’s full and good and the seeds are money and other bad things so they should be spit out. She says “Never let the seeds stop you from enjoying the watermelon” and that she’s got her watermelon but she is choking herself on the seeds.

On New Year’s Eve John and Jane are waiting for Conway to call so they know where he is having his party. They are all dressed up nicely and ready to go but Conway never calls. Upset, Johnny decides to go out without taking Jane but she runs after him. They go to a restaurant where there is a big party. They talk about their problems when John tells Jane that he wants to end the marriage. Jane is heartbroken; she says Happy New Year sarcastically and leaves. John stays behind and gets sucked into the party at another table. Jane comes rushing back in a panic; the baby is very sick and has been rushed to the hospital. Posted by UneCinephile at 11:41 PM