"Mary Haines, don't you have any pride at all?"
"No pride at all. That's a luxury a woman in love can't afford."
﻿
For this movie I’m not even going to write out a detailed plot it would just be totally confusing and I would feel like a gossip whore myself. This film is literally all about women from the writers to the cast. The first five minutes of the movie I got a headache from all the yapping that was going on.
Basically it’s a movie about women gossiping about everyone else’s lives but their own. They all go to this beauty club and just gab about everything and everyone. All the women are all kept and have nothing better to do while their husbands are at work. 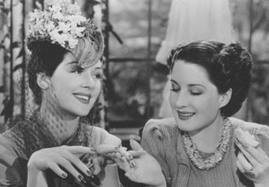 Norma Shearer’s character, Mary Haines, is the only who has any common sense and doesn’t really gossip unless her friends come over for lunch. One day she decides to go to this club that everyone goes to and the manicurist starts gossiping away and she lets slip that this lady’s husband, Steven Haines, is seeing this woman who works behind a perfume counter. This manicurist doesn't know who Mary is so Mary gets up all upset and walks out. By this time all her friends know about her husband’s affair but she refuses to talk about it and she doesn’t want to bring it up to her husband.

Well things get crazy and Mary divorces her husband and she’s still totally in love with him and he is as well but their pride is getting in the way. The very last scene of the film is Mary seeing her husband in a club and they get back together.
My god this film made me really hate women and all their gossiping!!! In 71 years nothing has changed at all!!
The only good thing about this movie is the cast; it’s like an all star movie of classic actresses. You have two of silent films’ greatest stars, Norma Shearer and Joan Crawford. This was my first movie seeing both actresses. Norma Shearer was excellent I really liked her and her character was very good, you don’t feel sympathetic or annoyed or angry with her you just feel for her. Joan Crawford… she was a good actress but the woman is SO ugly! She played a very good antagonist as the other woman. Joan Fontaine was my age when she made this movie (what have I been doing wrong with my life?!), she’s outrageously over dramatic but ridiculously adorable. The next year she would go on to make Hitchcock’s Rebecca (I am very jealous). Paulette Gooddard I now love as well. She played a very good, feisty character. Rosalind Russell was such a pain in the ass but she was funny. The best part of the film is when Paulette Goddard and Rosalind Russell start fighting each other and Goddard bites Russell's leg!!! Definitely a classic scene to watch I cracked up so much. The clothing for this film was alright. Adrian who designed the costumes for The Wizard of Oz made the costumes. There is a scene where some of the women go to a fashion show and the show is in Technicolor. I have seen some Adrian’s designs for other movies and they were gorgeous but I did not like much of the clothing in this movie especially the ones Rosalind Russell wears they were hideous!!
I will say some of the dialogue is hilarious and very fresh:
Edith Potter: Weren't you going to Africa to shoot Nancy?
Nancy Blake: As soon as my book's out.
Sylvia Fowler: I don't blame you, I'd rather face a tiger any day than the sort of things the critics said about your last book.
Countess DeLave: Get me a bromide - and put some gin in it.
Sylvia Fowler: Oh, you remember the awful things they said about what's-her-name before she jumped out the window? There. You see? I can't even remember her name so who cares?
Crystal Allen: Thanks for the tip. But when anything I wear doesn't please Stephen, I take it off.
Crystal Allen: There is a name for you, ladies, but it isn't used in high society... outside of a kennel.
(^^^ one of my favorite movie lines!!) 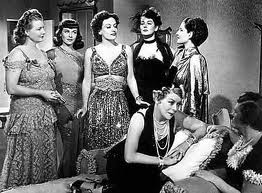 I know the film is called The Women but there could have been a guy thrown in at some point it was too much with all the ladies, the only male who was part of this film was the director, George Cuckor. All the estrogen needed to be toned down a bit. 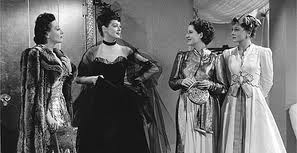 The Women is good to watch once just for all the actresses who star in the film. Posted by UneCinephile at 7:03 PM