“Do you believe in witchcraft Ms. Connell?”
I Walked with a Zombie is not what we today would think of a zombie movie. There are no creepy Exorcist-looking dead people roaming around a small town getting their heads blown off with a shotgun. I Walked with a Zombie explores the tradition of voodoo and the sect’s belief in the dead and their rising. This  film explores voodoo respectfully. The lead character does not believe in voodoo but she begins to question whether it could help.
Frances Dee plays Betsy Connell a Canadian nurse who is sent down to an island called Saint Sebastian. She is to care for Jessica Holland, the wife of a sugar plantation owner named Paul Holland (Tom Conway) . On the boat heading towards the island, we hear Betty’s thoughts on how beautiful the island is going to be when it is as if Paul can hear her thoughts and he says that nothing stays beautiful for long. At dinner when she arrives on the island, Betsy can hear drums. Paul and his brother Wes explain that the drums are coming from the houmfort where the natives practice and hold their voodoo rituals. Paul tells Betsy that she can meet Jessica the next day. That night she hears crying and follows it to an old tower on the property. As she climbs the stairs she can see Jessica and calls out to her. Jessica has this emotionless look on her face and just walks towards Betsy like she is going to harm the nurse. Betsy screams and Paul, Wes, and the house keeper Alma come running into the tower. Paul commands Jessica to stop. She can follow simple commands and that is all. Paul sees Betsy coming to an island as a mistake; he feels she cannot handle the island that she is easily frightened. But Betsy assures Paul that she is not easily frightened; she never would have come to the island in the first place if she had been.

The next day Betsy talks with Jessica’s doctor. The doctor says that Jessica had such a high fever from a tropical disease that it gave her brain damage. So far there is no cure to be found and Jessica just lives like a zombie.
One afternoon on her day off, Betsy walks into town where she happens to meet Wes. As they sit a café a man, unaware that Wes is near, sings a song about the family. The song says that Wes had an affair with Jessica and that the boys are lonely and a young nurse has come along. The man stops singing the song but it affects Wes and he starts drinking heavily. When it gets dark Betsy wants to leave but Wes is completely out of it. Mrs. Rand, Wes’ mother, comes to get him. What has happened to Jessica has obviously affected the family and Wes and Paul blame themselves for her condition.

That night at dinner, Paul and Wesley get into an argument over Jessica and over Wesley’s drinking. Wesley blames Paul for the way Jessica is and that he is only trying to impress Betsy. By this time it does seem as if Paul is trying to impress Betsy he seems to have very little interest in his wife at all, as if he is ready to move on since he knows nothing can be done for her. That night Betsy wakes up to the piano being played outside her room. Paul is playing it, he apologizes for waking her. He tells Betsy that he thinks she should go back to Canada that he should not have brought her to island and that now he feels he is the main cause of Jessica’s condition. Betsy does not want to go she has fallen in love with Paul. Betsy is determined to make Paul happy and to do so she feels she must find a cure for Jessica. She and Jessica’s doctor try to give her insulin shock treatment but that fails. Now desperate, Betsy asks Mrs. Rand’s advice about voodoo and if it could possibly help. Mrs. Rand works in a clinic so she sees things in a purely medical way. She says that voodoo is only psychological.
That night Alma tells Betsy how to get to the houmfort. The night is windy as they walk through a cane field and past animal sacrifices. Betsy is obviously a little nervous and frightened but she keeps moving ahead. At a crossroad they come up to a zombie man who stands on guard. 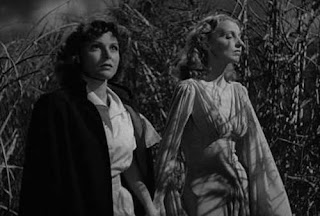 He is very scary looking; he does not say or do anything. At the houmfort Betsy sees a priest doing a ritual with a saber. Followers play drums and chant.  Some followers, including Betsy, line up to ask the voodoo priest for advice through a hole in the door. When Betsy ask for a cure for Jessica the door opens and she is pulled inside. The priest turns out to be Mrs. Rand. She tells Betsy through voodoo she is able to tell the natives to use modern means of curing the sick. Mrs. Rand says that Jessica will never be cured she is too far gone.
As Mrs. Rand and Betsy talk; the natives are amazed by the state Jessica is in. The priest with the sword stabs Jessica in the arm and she does not bleed. Betsy comes out of the hut and quickly takes Jessica back. The natives have upped their drumming and want Jessica to come back so they can do more ritual tests on her. Residents of the area are starting to get worried since they have never heard this before and always passed voodoo off as a joke. Later that night, the priest sends the zombie man to get Jessica. Betsy hears him shuffling passed her room and runs out. Before the zombie man can take Jessica Mrs. Rand comes out to the garden and sends him away.
An official inquiry into Jessica’s illness has been started. Wesley uses this inquiry to put the blame on Paul but his accusation does not go very far. Mrs. Rand says she knows why Jessica is like this; she has turned the girl into a zombie. The doctor and Betsy dismiss this because her heart is still beating and she was never in a coma. When the doctor leaves, Wesley backs his mother up by telling that Jessica was in a coma for a day. Mrs. Rand has never believed in voodoo but felt desperate to save her family from breaking up when Jessica wanted to run away with Wesley. She felt possessed by the voodoo god to turn the woman into a zombie.

Paul is now the desperate one as he asks Betsy to put Jessica out of her misery but she will not do it. The voodoo priest takes control of Jessica by putting her into a walking trance. Wesley follows her taking an arrow off the fountain statue of St. Sebastian.  Wesley carries Jessica in his arms to the shore of the beach. As the voodoo priest sticks a pin in a plastic doll of Jessica, Wesley plunges the arrow into her. He takes her body and walks into the ocean. The next day Wesley and Jessica’s bodies are found by natives while fishing.
I Walked With a Zombie was very well received when it was first released. There is nothing spectacular and jaw dropping about the film. There was nothing like this being made at the time. What makes this film so good is that it is ambiguous: we never know the real reason for Jessica’s illness, we never know if she truly is a zombie or not, we do not know if the voodoo priest made Wesley kill Jessica and himself, and so much more. It did not stereotype Caribbean culture or the voodoo ritual it was a semi-serious look into is it-is it not real aspect of the voodoo religion. First watching the film it can be a little nerve wracking because you do not know what is going to come along or happen; maybe the nervousness or suspense is due to what we have come to believe that voodoo is scary with zombies and bringing people back to life.
Everything about this film was very well done. The acting was very good. I watched this film to see Frances Dee, I had seen her in a pre-code film she made with Ginger Rogers called Finishing School  and I really liked her. She was gorgeous and a very good actress. The lighting in the film was great. Most of it took place at night time with the moon shining, the lighting added to the mystery and intensity to the story.
Very little music is played throughout the film. The scene where Betsy comes across the zombie man walking in the garden there is no music playing; you can feel your heart race as you wait for something to happen. A scene without music is often more powerful than a scene with music since you are left to really think about what is to come there is not cue.
One of my favorite aspects of the film is how Paul referred to island as being dead and unhappy, everything came to die there there was no beauty. On a wall in Jessica’s room there is a painting called Island of the Dead by Arnold Bocklin. Very nice touch by the design department adding this painting to the wall.

I Walked with a Zombie is not a conventional Golden Age of Hollywood story. There is a bit of a love story going on between Betsy and Paul but it is not the main focus. The focus is on ambiguity and voodoo and desperation. I liked this film for those aspects, for it being different from what was being made at the time.
﻿
Posted by UneCinephile at 1:34 AM