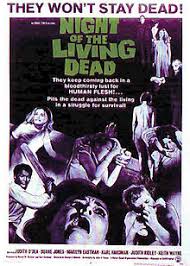 “They're coming to get you, Barbara, there's one of them now!”

Night of the Living Dead is a movie I have heard about but had no desire to watch because it is a horror movie and I am not a particular fan of horror movies (except for the original and remake of Amityville Horror). I am going to nerd out big time and reveal that I sat down to watch Night of the Living Dead because of the TV show Leverage. At the end of the episode my favorite character Parker was watching it and then my other favorite character Hardison went on about how it is the best horror movie of all time. There was a clip of the movie and it looked interesting so I figured I would give it a try. And also my best friend Mike really likes Night of the Living Dead and he once told me about it. I trust his judgment when it comes to movies especially horror ones because he knows I am not a huge fan of the genre. Pretty much right from the beginning I was floored with how awesome Night of the Living Dead is. Not for one moment did it let up with the tension and scariness.
The movie begins when brother and sister Johnny and Barbara driving up to a cemetery. They are at the cemetery putting a grave blanket on their father’s grave for their mother. Johnny is anxious to get back since they drove almost three hours to get to the cemetery they have to drive another three back home. They see a man walking up the road. Johnny starts teasing Barbara that the man is coming to get her. As the man walks closer he looks odd. He attacks Barbara and runs after Johnny until Johnny falls on a gravestone and hits his head. The man continues to his pursuit of Barbara. She runs to her car and locks the doors. The man picks up a rock and breaks the passenger side window. Barbara drives the car down the road but something happens to the car and she has to get out and run. The man is still behind her chasing her. Barbara finds a farm house. She enters the house. Whoever the house belonged to stands empty. Barbara goes up the stairs only to find a woman dead on the stairs. 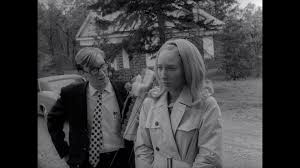 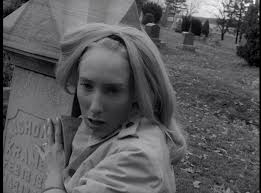 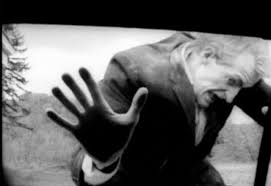 A man named Ben drives up to the house. He comes storming in looking to get away from the undead creatures outside. Ben immediately starts asking questions while looking around the house for things to board up the doors and windows. Barbara at this point is slowly losing her mind and going into shock. She tells en what happened to her and Johnny and she cracks up. Ben punches her out and lays her on the couch. As Ben works around the house the radio is playing. No one is sure at that point what is causing these undead people to come back and kill the living. They tell everyone listening to stay in their homes and do not go outside.
Shortly after Barbara comes to, two men come up from the basement named Cooper and Tom. Ben is angry with them for having not come up sooner to help. Cooper is a short tempered man he tells Ben that they did not know if they were the things outside. Cooper’s wife and daughter are still in the cellar. He believes the cellar is the safest place for them to be if the creatures start attacking. Ben, who has been the only one thinking clearly, yells that he does not want to be caught down in a cellar with only one way out if the things outside get in. 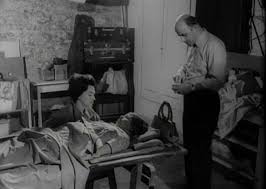 Ben and Tom are able to find a TV. The news reports that the things going around murdering people are the unburied dead. According to scientists the undead are eating killing the living and eating their flesh. Rescue centers with food, shelter, and medical help have been set up at local hospitals. Cooper’s daughter needs to get to a hospital since she is not feeling well. He tells everyone that when a bunch of the undead flipped their car over one of them bit her in the arm. There is a gas pump near the barn. Ben has a car in the front. Tom knows more about cars then Ben does so he goes with Ben to fill the car up. They come up with a plan to have Cooper throw Molotov cocktails out the window since the things do not like fire. The plan goes along well until Tom gets gasoline on the truck and it catches fire from the torch Ben was carrying. Tom drives away with his girlfriend in the passenger seat. He gets out of the car but her coat is caught. Both die when the truck catches fire. 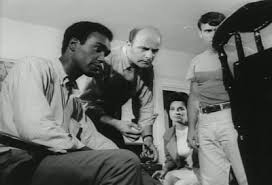 After this their situation becomes dire. Hundreds of the undead have no gathered around the house. All at once they begin their attack on the house. 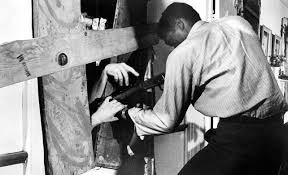 The ending is tragic. It is not even scary or satisfying it is just tragic. It is one of the perfect movie endings because you do not seeing it coming at all until the last second… well at least I did not see it coming.
George A. Romero is a genius. He directed the movie and he wrote it with another screenwriter. There were so many scenes that were excellently filmed. My favorite scene of the movie is when Ben was going around the house looking for objects to block the window and he has the radio on to the news. We find out what is going on and how and why this happening all as Ben is moving around. Two things are going on at once we are watching Ben moving around and hearing another. I liked how Romero kept the situation real. Obviously the undead coming back to life to kill the living is fake but the panic and the people are real.
What I really liked about the movie was the undead beings. I liked them because they were not the disgusting zombies like the ones from The Walking Dead. They look sinister which makes them scarier as they move about. The fact that the movie was filmed in black and white make them even scarier.
Night of the Living Dead is one of the best movies I have ever seen. I liked all the characters even Cooper who was the biggest moron and deserved what happened to him in the end. The story was really good it gives you information about the attack but it is not definite. I wish “horror” movies today could have good stories with decent acting. Today “horror” movies are a horror they are terrible. Night of the Living Dead is a perfect movie I recommend it to all film buffs and movies lovers. 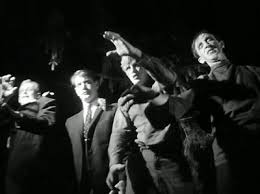 Posted by UneCinephile at 1:26 PM