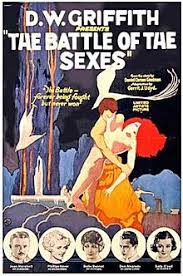 “The battle of the sexes- Always being fought but never won”

Battle of the Sexes was a silent film I have heard of but was never able to see until TCM aired it some time ago. As with all movies I have loaded on my DVR it takes me forever to get through them (I still have some of Ginger Rogers’s and Kay Francis from TCM’s Summer Under the Stars!!) because they are on the only DVR in the main living room of my house where everyone is and there is no way they would let me watch an old movie in piece. Anyway, I finally got around to watching Battle of the Sexes. I saw it was a DW Griffith film and I almost died but then I saw the length and thought well that is pretty good since all the films I have seen of his so God forsaken long. Unfortunately for me even with a shorter length the film just dragged as with all of the Griffith films I have seen so far.
I am not even going to write out a summary. All you have to know is that a family man comes into money through a very good business deal. He loves his family with all his heart and his wife and children love him even more in return. Down the hall lives a younger woman who is a gold digger and in on a scheme with another guy that I do not know if he is her boyfriend or just a guy she does business with. She reads about the newly rich man and tries to win him over. She does win the man over and they begin an affair that almost breaks up his marriage and almost leads to his wife committing suicide and his daughter killing the woman. In a not so surprising ending the man realizes how much he loves his family and what he has done to them and the wife and children take him back.
The End

With a title like Battle of the Sexes I was expecting this to be a slinky sexy silent pre-code and instead it turned out to be boring. When I hear a title like this one I imagine sex and cheating and all kinds of pre-code goodness.  Maybe that was my major problem with the film I was expecting a Divorcee/A Free Soul type film and it just fell flat. DW Griffith was a great director he got some excellent shots… when he stuck to the main story that is. I cannot stand the way Griffith goes off the main story to add some humor. That bothered me to no end in Way Down East I felt he got so far off the main story.
I do want to mention that I loved the clothes the actress playing the daughter was wearing. The outfits were so late 1920s they very pretty. They were pieces of clothing I would love to wear today... actually I think I have seen outfits like that around lately. 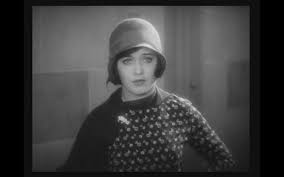 Battle of the Sexes is currently on Youtube. I am not going to say not to see it, give it a try if you want.

Posted by UneCinephile at 11:46 PM