“Darling, you understate the case by three bottles and a thousand tears!”

I always find it interesting when I watch a film where I really like one thing about and do not care for another thing. I will give the example of when I watched The Razor’s Edge with Gene Tierney and Tyrone Power. The story and the characters were not bad I just wished that the acting had been better. Something like that I find interesting because most of the time everything usually clicks together or it usually falls apart together in a film, well, for me anyway. This situation happened again to me when I watched the 1940 film Angels Over Broadway. The dialogue was good but the acting and the story were not the greatest.
The story, unfortunately, did not catch my attention whatsoever so I will make this summary as short as possible from what I did kind of pay attention to.
Bill O’Brien (Douglas Fairbanks Jr.) picks up people to play poker with a gambler and he gets a cut of anything the gambler wins over three thousand dollars. On a rainy night he walks passed a man coming out of a cab. The man, Charles Engle, gives the cab driver a large bill and tells the driver to keep the change. This action captures Bill’s attention so he follows Engle into the club they are in front of. He next sees Engle give the cigarette girl a fifty dollar bill and also tells her to keep the change. Bill thinks Engle is loaded. In reality Engle is contemplating suicide after he embezzled three thousand dollars from the man he works for and is just going out for one last night. Bill gives the gambler a call saying he has a new player who seems to be from out of town and has a lot of money. Now all he has to do is convince Engle to come play.
At the club is a young woman named Nina Barona (Rita Hayworth) who is trying to get a chance to speak to anyone who might be able to give her a job in a show and a playwright named Gene Gibbons (Thomas Mitchell) whose latest play is just one in a succession of flops and it totally intoxicated. Nina sits down at Engle’s table because she somehow thinks he has connections with a show. Gene was about to leave the club when he was accidentally given Engle’s jacket and found his suicide note. Gene sits down with Engle talks about life and even says he can try to get him the three thousand dollars by getting back some jewels from his ex-wife that are worth a lot. The crusade to get the jewels fails. 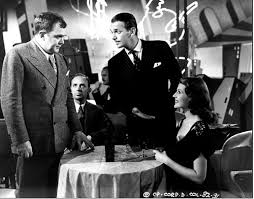 Bill moves in to get Engle to play a round of poker. The truth comes out but Gene says that Engle can play until he makes the three thousand then he could remove himself from the game by saying he has to do something and will be right back. Bill likes the idea but as the game gets close he is not too sure about it.
After this I completely lost interest and attention.
The cast could have been so good together. Douglas Fairbanks Jr. is one of my favorite classic actors. In the films I have seen him in so far he has been great. In this he started off alright and then just fell. He has a bit of a Noir edge to him and was good at it. Rita Hayworth was just starting out at this point so her acting was not that great. I kind of felt bad for her in some scenes because she was so bad. Thomas Mitchell’s character was drunk the whole time. I was not too crazy about his character even though he was a drunk who was trying to be decent.
Ben Hecht, one of the greatest screenwriters to ever have graced films, wrote and partially directed it as well. His dialogue was so good. It was a very wordy screenplay. I never mind wordy I like dialogue when it is well written and well performed. The problem was the performances. The performances from the actors could not do justice to the dialogue. Rita Hayworth just bombed most of her scenes it was as if she could not keep up with her dialogue the way the character was supposed to. Douglas Fairbanks Jr. seemed like he was trying too hard and hammed up his dialogue. Thomas Mitchell I think was the only one who actually did justice to his dialogue he was very good.


Angels Over Broadway had the potential to be very good. The screenplay was nominated for Best Original Screenplay at the Oscars that year. It deserved it definitely especially because Ben Hecht wrote it. The acting just brings this film down unfortunately. As I said at the beginning the contradiction (if that is the correct way to put it) with the good writing and the bad acting is interesting to see. I will only suggest seeing Angels Over Broadway if you are a fan of either Ben Hecht or any of the actors other than that skip it.
Posted by UneCinephile at 9:08 PM