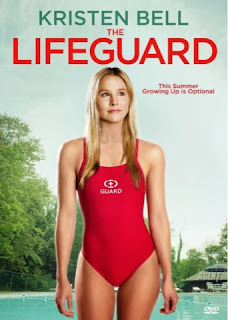 Ever get the feeling your life is not going the way you want it? Ever feel trapped in the way your life is going and just want to run away? How bad does that feeling suck?! I went through a rough patch mentally and emotionally last year. I had no clue what I wanted to do with my life. I wanted to either be home all the time or I wanted to run away and be alone. I just hated being me. I was in a crisis. Fortunately I was able to get out of my rut and I feel a lot better. In The Lifeguard the main character is going through a turning-30-crisis and realizes that her life is not how she thought it would go.
Leigh (Kristen Bell) is twenty-nine years old, she lives in New York City, and works as a journalist. Her boyfriend is her boss and that relationship does not end well. She was given a story that was really tragic and combined with everything else going on in her life the story just pushes her over the edge.
Leigh decides to head back home to Connecticut with her cat Moose. Her mom is not too thrilled to see her but her dad is. She reconnects with her old friends Todd and Mel (Mamie Gummer). Todd has never had a desire to move out of town and Mel is married and trying to having a baby.
In high school Leigh was a lifeguard and takes it on again since she has no plans on going back to the city. At the pool she meets a high school kid named Jason. One night Todd takes Leigh and Mel out to get some pot and they buy it from Jason and his friends. Mel is not too happy because she works at the local high school and has seen Jason around. They all hang out with the high schoolers. Jason starts coming around and hanging out at the pool where Leigh works.

Things begin to spiral out of control for Leigh when she starts seeing Jason and having sex with him. She sees him as broken and vulnerable and she tries to tell lead him in what she thinks is the right direction. Mel gets mad with Leigh for sleeping with Jason. Her mother flips out at her for being home and taking up the father’s attention so she kicks Leigh out of the house.
Eventually Leigh heads back to the city along with Todd.

The Lifeguard was not too bad. I did not give that great of a summary there are some details in the movie that would have helped explain more but I do not want to give too much of the story away. Some parts were boring some parts were good. I kind of liked how once Leigh got back into town Mel and Todd kind of reverted back to their old ways but then they picked themselves out of it. Kristen Bell was excellent she is a very good actress who should get more attention. Bell can do anything she is given be it snarky teen, really bad horror movie, or dramas like this she is brilliant. Mamie Gummer was good too. I would like to see her in more movies. David Lambert who played Jason was also excellent because he looked like a mature older kid yet at the same time you could see he was a vulnerable kid trying to do what he wanted. I liked The Lifeguard I liked the character of Leigh even though she did screw things up for herself and others. I can relate to her being lost and just wanting to get out of her rut once she found that her life and plans have not gone the way she wanted. As much I liked The Lifeguard I will say that the story and the characters are not for everyone so unless you really like Kristen Bell or can relate to her character, skip it.
Posted by UneCinephile at 10:16 PM