“If I am the Phantom it is because Man’s hatred has made so.”

Halloween is this Friday. For this edition of Silent Sundays I wanted to watch a good old silent “horror” film. I could not really think of one that I have not seen. Then I thought to myself, silly any of Lon Chaney’s films are basically “horror” since he was known for playing scary characters and wearing awesome makeup. I realized I had his version of The Phantom of the Opera saved. PERFECT! So in honor of Halloween for this edition of Silent Sunday I present a review of the 1925 version of The Phantom of the Opera.
It is the late 1800s/early 1900s of Paris. The famous Paris Opera House has just been sold to new managers. They are warned that many people working in the theater believe there is a phantom, a ghost that haunts the old medieval cellars the theater rests above. The new managers think nothing of the stories they just brush them off. There is a performance that night. The managers go to Box 5 and ask a maid who the person in the box is. The maid says she does not know who he is she has never seen his face. He wears a cape and a mask.
Backstage after the show the dancers get nervous. They say they saw the Phantom come up from the cellar again. One of the older stagehands tells the girls and another man that he had once seen the Phantom with his own eyes. He was a hideous creature with no nose and beady black eyes.
The following day the mother of the Prima Ballerina Carlotta receives a letter signed by the Phantom. It states that Carlotta must not sing a number that night instead a young girl named Christine Daaé is to sing it. If Christine does not sing something bad will happen to Carlotta. The mother is furious that this supposed phantom is making this kind of demand. But on the day of the show Carlotta becomes sick and Christine sings the number. 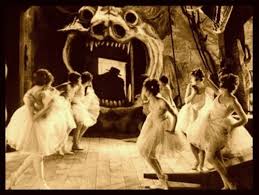 Christine is seeing Raoul, a captain in the French army. He wants to marry her but she never wants to leave the Opera. She tells him to forget about her. Raoul walks out of the room and from somewhere in the walls of her room Christine hears a melodic voice. The voice tells her that he has placed everything at her feet and that she will be worshipped by all of Paris but only if she listens to him. Christine obliges the voice saying she will do whatever he wants her to do. 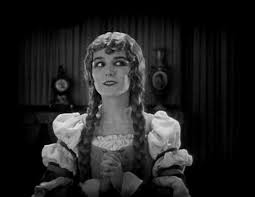 The Phantom writes another letter to Carlotta’s mother. Again it says that Carlotta better claim she is ill or misfortune will befall her. He has even sent one to the managers that if they do not comply with his demands a curse will come upon their performance of Faust. Carlotta’s mother makes her go on stage that night. The Phantom keeps his promise. As Carlotta sings the lights in the giant chandelier over the audience begins to flicker and it eventually falls on the audience as well the stage.
After the performance Christine goes to her dressing room. She hears the voice of her master speaking to her. The voice tells her to walk into her mirror which is shown to be a trapped door. Christine has walked into one of the many cellars under the Opera. The Phantom (Lon Chaney) comes up behind her. When he comes into her sight, Christine is both disgusted and horrified by what is front of her. Even though she is frightened Christine follows the Phantom. He brings her down underground water channels to the cellar where he has made his home.

In the morning Christine wakes up in her room in the furnished cellar and finds a note from the Phantom. He wrote to her that as long as she does not tough his mask no harm will come to her. Stupid girl and her curiosity get the better of her. Christine sneaks up behind the Phantom and pulls his mask off. He looks exactly as the stagehand described him with no nose, beady eyes and wrinkled deformed skin. Despite what she has done, the Phantom lets Christine go back to the Opera on the condition that she never see Raoul again. 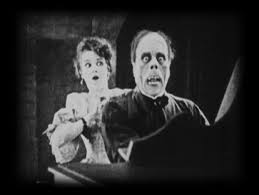 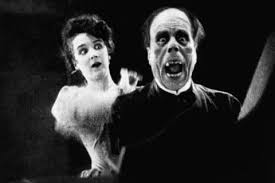 Every year the Opera holds a large costume ball. The Phantom boldly comes to the party dressed in a red cape, a large black hat, a skeleton face for a mask. Raoul takes Christine to the roof to speak to her alone. The Phantom follows them and looks over them from atop a statue. Christine tells Raoul she has seen the Phantom and needs his (Raoul’s) help in getting away. She begs him to take her to England to be as far away from Paris and the Phantom as possible. 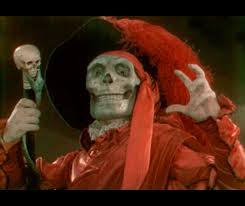 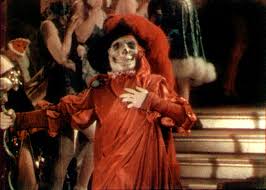 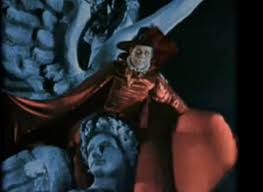 A police officer named Ledoux has been looking for the Phantom after a description for a man came to his office. The man’s is Erik. He had once been a composer and a musician and was sent to Devil’s Island after the Second Revolution and was considered insane. Ledoux has been following the Phantom for some time. He was in the room the night Christine went through the mirror. He meets up with Raoul to look for Christine. He tells the captain that the Phantom had been brought down to the cellars during the Revolution and tortured.
The Phantom takes Christine back to his cellar. Ledoux and Raoul find her but the Phantom traps them in a basement. The Phantom somehow gets Christine to pull a lever which floods the basement the two men are in with water from the underground channels. Christine can hear the men’s cries and she tells the Phantom she will do whatever he wants if he will let them go. The Phantom opens the basement door and the men are saved. 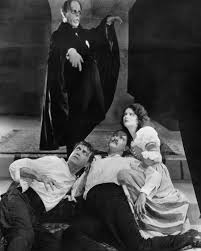 A crowd is heard in the distance coming for the Phantom. The Phantom grabs Christine and takes her to the surface. He tries to get them both away in a carriage but the carriage falls over and Christine is thrown out. The crowd catches up to the Phantom and they chase him to the edge of the Seine. They beat him and throw him into the river.
The Phantom of the Opera I found to be a bit boring. I thought it was a little long but that tends to be my though most of the time with silent films lately. The only really interesting part of this film was the ball scene because the film was in color. The coloring in that scene actually made the Phantom look a little scarier because you can see the shadows and his clothing clearer. Also the scene was just really cool. Lon Chaney was an absolute creepy bugger and he was totally brilliant. I like how Chaney was usually the bad guy in his films but everyone back then loved him. He was genius. You feel for his characters no matter how bad or evil he was supposed to be. The Phantom of the Opera was a perfect silent film to watch for Halloween.


Happy Halloween to all my followers and to those who are casually reading this post. Stay safe either trick or treating (Wait, how old are you reading this? If you are not under the age of twelve and you are trick or treating, go get your head examined!) or going out partying your asses off at a bar or house. 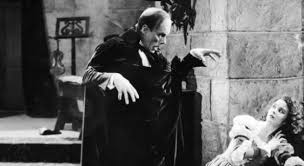 Posted by UneCinephile at 10:50 PM