“Do your stuff Wizzy.”

We all have seen the 1939 film The Wizard of Oz. If you have not seen that film then you have had a very sheltered life. The film is a classic in every single way. When I was little I watched it over and over again. It holds a special place in my heart and always will. You may know the story as told in the movie but did you know that it was originally a book? The Wizard of Oz is just one book of several written by L. Frank Baum in the mid 1800s that take place in the Land of Oz. I read The Wizard of Oz some time ago. It is much different than the film. In the book Dorothy was a little twelve year old girl who wore silver shoes. All the characters she meets- the Scarecrow, Tin Woodsman, and the Lion- are not similar the people she knows back in Kansas. I loved the book it was such a good story.
Before the 1939 version there were two other films of The Wizard of Oz and both were silent. One was made in 1910 and in 1925. The version I watched for this edition of Silent Sundays is the 1925 one titled The Wonderful Wizard of Oz.
An old toymaker is approached by his small granddaughter asking him to read her a story. She brings him the book The Wonderful Wizard of Oz. The story begins with the Land of Oz having awaked to the news that their princess and future queen has been taken from the kingdom. The kingdom is currently ruled by the evil Prime Minister Kruel and his right hand man Wikked. There is a prince named Kynd and he wants Kruel to launch a search for the missing princess. Kruel brings in the Wizard who is really just a medicine-show man who is just a fake. Kruel has the Wizard distract the audience while he comes up with a plan to find their proof of the princess’s right to the throne.
Back to the granddaughter and the grandfather, the girl tells her grandfather to get to the story of Dorothy, Scarecrow, and the Tin Woodsman. This is where the story is kind of familiar to us. I say kind of because this is where the film completely strays from the book. Dorothy does live with her Aunt Em and Uncle Henry but Uncle Henry is a big fat abuser who runs around the farm all angry. There are two farmhands that are in love with Dorothy, one is a skinny happy guy and the other is big and meaty. The skinny one wants to go up and talk to Dorothy but he is shy. He misses his chance with the big guy gets to her first.
Sometime later Dorothy tells Aunt Em that Uncle Henry has always been mean to her and she does not know why it is as if she was not part of the family. Aunt Em reveals that Dorothy was brought to their house when she was just a baby along with a note telling them not to look at the rest of it until Dorothy turned eighteen. Well, Dorothy is not eighteen and she can see the letter that was sent with her.
In Oz Kruel sends some men to Kansas to retrieve the letter of proof that Dorothy is the rightful queen. Just as Uncle Henry was about to get the letter out a box he dug in the backyard they hear and see a plane land in their field and the group of men storm out. They tell Henry that if he gives them the letter they can be rich. Henry does not give them the letter. The leader of the group sees Dorothy tell the skinny guy that when she finds out what is in the letter he will be the first one she tells what is said. The bigger guy is pissed and upset. The leader goes to the big guy and says that he can give him all the wealth he could want as well as the girl.
Other things that got ridiculously drawn out happen and then a storm comes bring a tornado. The tornado brings the house along with Dorothy, the lead bad guy, Uncle Henry, the skinny guy, and the big guy to the Land of Oz. Kruel wants them all arrested so they do not come into the kingdom. Dorothy reads the letter before anyone can take it out of her hand and it reveals that she is Queen of Oz upon turning eighteen.
There is some kind of weird chase going on for a bit. The Wizard comes out of the city and tells Kruel that the people Dorothy was with have been disguised as things around them. The skinny guy becomes the Scarecrow and the big guy becomes the Tin Woodsman. 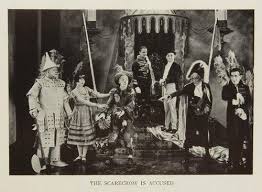 The rest of the film is just ridiculously drawn out and, I have to admit, I lost interest and my attention wandered so bad. There was another chase scene that dragged out and was totally unnecessary and not funny. I did manage to pay attention to the last few minutes, though. Dorothy winds up with Prince Kynd and the whole story was the dream of the little girl who had the story read to her.


The Wonderful Wizard of Oz was interesting. I was not too crazy about but I do appreciate the different take on the story. Its major, major downfall for me was that it was too long. I know it is only seventy-one minutes but dear God there were so many scenes that could have been much shorter! I hate it so much when silent films have long dragged out scenes (DO NOT even get me started on D.W. Griffith films they make me so mad). As much as I found The Wonderful Wizard of Oz boring I will say to give it a try because it is such a different take on the book and the 1939 film we are all used to. 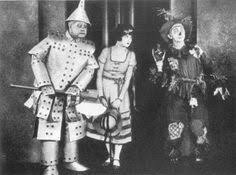 Posted by UneCinephile at 7:25 PM