“Your job is to detect criminals, not to punish them.”

Happy Noirvember!
Whenever I hear Film Noir I immediately think of Gene Tierney, Dana Andrews, and Otto Preminger. Yes, I immediately think of Laura, but the two actors and director made several Noirs. Besides the famous Film Noir, Tierney, Andrews, and Preminger had the looks and the style I associate with the stories typical of Noir. The actors and the director made another film together in 1950 called Where the Sidewalk Ends.
Detective Mark Dixon (Dana Andrews) is always being complained about for being too rough with those he brings in. He has a bad temper and when no one listens to him he immediately beats them. Mark’s superior as downgraded him to second grade detective.
At an apartment somewhere in town an illegal gambling racket is going on. At this apartment is a woman named Morgan Taylor (Gene Tierney). She is there with a guy named Ken. Morgan wants to go home she has work the next day. Ken gets furious with her and the guy running the gambling at the apartment, Tommy Scalise, block her from leaving. She realizes that Ken has brought her to the apartment as a bait to keep a rich man there gambling since she has become his lucky charm. Ken and the rich gambler get into a fight and Ken winds up killing the man.
Mark is called to be a detective on the scene. Scalise has sent Ken and Morgan home. The apartment is clear of any other people. Scalise tries to cover up the fact that he had some gambling going on. Mark has some history with Scalise and immediately tries to pin the murder on him. Eventually Mark is given Ken’s name and tracks him down to an apartment. Ken is in the room and Mark gets frustrated with him quickly when Ken does not give him the information he is looking for. The two men get into a fight and Mark punches him too hard and kills him. Seconds after realizing he has killed a man a call comes through for Mark. The call is from his partner telling him to take it easy on Ken because Ken is a war hero. Mark realizes he is in a world of trouble. He calls a cab and walks out pretending to be Ken so as to make it look like Ken left the apartment. Before leaving Mark places Ken’s body under the stairs.

Morgan is eventually tracked down. Mark talks to her at her job. She reveals her and Ken had been married they separated a few months before. She went out with her ex-husband because she felt bad for him since he had been down on his luck. He had taken her out solely to be a decoy. After the interview Morgan takes Mark back to her apartment before they go out for dinner. Her father lives with her and turns out Mark had jumped in his taxi one night and had the father drive after someone. Mark gets a call at the restaurant that Ken’s body has been found and that Morgan’s father was seen at the apartment threatening to kill Ken if he does not open the door because Ken had hit Morgan.
Now Mark tries to cover up his crime and pin the murder on Scalise. Of course Mark is arrested because this is a classic film and no one can get away with a crime in a classic film.
I love Gene Tierney and Dana Andrews as a screen couple. They just looked so good together. Besides looking together, the types of characters they played, the rough detective and the nice woman who gives the detective a chance, just always worked with them. I feel that in some classic films when there is a rough or hardened detective and the nice woman who gives him a chance it does not work because it is so cheesy and the actors just do not do a good enough job making their roles good or believable. Tierney and Andrews made their characters believable and therefore made their characters work well together. Andrews had that tough look about him and Tierney had those soft beautiful features and way of speaking calmly. Hopefully part of what I just wrote makes some kind of sense. I am so used to seeing Gene Tierney and Dana Andrews together in Laura that seeing them in another film out of Laura is/was an experience and one I definitely enjoyed. 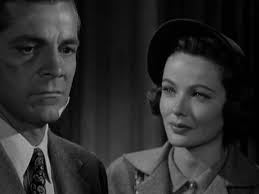 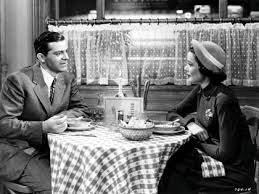 Otto Preminger is just a fantastic director. I like the way he filmed his actors. It was intimate but never lost the focus of the main story. Again I hope I made some sense on what I just wrote. Preminger’s direction to me never seems to have any frills to it, it always feels very straightforward and gritty and I really like that.


Where the Sidewalk Ends is a good Film Noir. I liked how the anti-hero is in a way the bad guy of the story. Watching this I felt like I was not supposed to like the character of Mark because he was a brute and he had murdered someone after being told to knock it off with the beatings but of course he gets softened by the love interest aspect with Morgan and his wanting justice with Scalise. Where the Sidewalk Ends, I feel, is not a typical Noir or a typical classic film and for that I really like it. When I first watched Where the Sidewalk Ends a few years ago I was not too crazy about it and would not have suggested it as a Film Noir must see but now I do highly recommend it.
Posted by UneCinephile at 8:58 PM