Like many films during and after World War WII the plot of The Dark Mirror deals with psychology and how the mind drives someone to snap and do something with great consequences.
A doctor is found murdered in his apartment. Witnesses who saw the doctor leave that night tell detective Lt. Stevenson that he left with a woman named Ruth Collins. Lt. Stevenson has these witnesses go to the office building and identify Ruth who works behind a newspaper counter. Each witness identifies her as the woman who left with the doctor. When Ruth is told the doctor died the previous night she cannot believe what she hears and faints.
Lt. Stevenson takes Ruth home and discovers she has a twin named Terry. Each twin has an alibi for the night before which are later confirmed and solid. The case does not go to court because it would be made a mockery with no solid evidence against either woman. Lt. Stevenson is convinced that one of the twins is guilty of the murder. He talks to a psychologist he knows, Dr. Scott Elliot, who specializes in the study of twins. 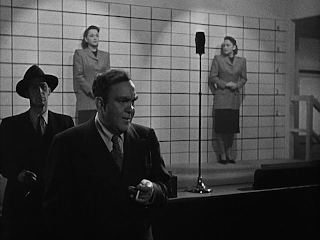 As Dr. Elliot conducts his tests of ink blots, word association, and more we can see the mind frame of each twin: Ruth is sweet and nervous and light; Terry is cool and disturbed.  Dr. Elliot begins to fall in love with Ruth. Terry knows what is going on between them and becomes very jealous. The doctor begins to see that Terry is jealous of Ruth and has always been from stories each sister has told him of their childhood. At one of their sessions Dr. Elliot gives Terry a lie detector test. Whenever he asks Terry about Ruth and she says her sister’s name her blood pressure rises creating a spike on the detector.
Terry starts to slowly torment her sister telling Ruth she has been having bad nightmares and yelling out in her sleep and that she should be take more sleeping pills so she can sleep restfully. Quite possibly the cruelest mind tease Terry pulls is flashing a light in Ruth’s direction for many nights waking her up in a paranoid panic. Terry tells her sister there was no light she must be going crazy.
Dr. Elliot reports to Lt. Stevenson that Ruth is in real danger of Terry driving her to insanity or worse murdering her.

The psychological aspect of this film is very interesting. Many films during this time period dealt with the issues of psychology and what can make someone a murderer or make them go insane. The psychological differences between Ruth and Terry added a good touch of suspense and interest. We waited to see what mean, calculating move Terry would pull to fool everyone around her. We want Ruth to get away from her manipulative sister before she goes out of her mind and be saved before it is too late. The evilness of one woman and the paranoia of the other creates the suspense and the drama.

For the first few scenes where Olivia de Havilland is both twins in the same scene all you can think of is “how on earth did they pull this off in 1946?” I had a good time picking out her stand-in when the camera was filming de Havilland from the front and the other twin from behind. A few scenes when Ruth and Terry are talking to each other and the one is filmed in the mirror and the other is filmed talking to the other in front of the mirror, that was a really cool effect (for some reason I like mirror shots though).

Olivia de Havilland was excellent playing the twins and creating their opposite personalities. For each character she changed her voice: for Terry her tone was harder and for Ruth her tone was gentler. Even in body language de Havilland used subtle but very good actions: Terry had a coldness to her you can see her coolness in her facial expressions and she smoked; Ruth had a softness with a bit of a tense nervousness that showed in her eyes and the way she carried herself. Before watching The Dark Mirror I was a bit on the fence on how I felt about de Havilland’s acting since I had only seen her in period films like Gone with the Wind and My Cousin Rachel I can now say I like her as an actress after seeing her fantastic range as Terry and Ruth and in a modern setting. It is hard not to think of the possibility that de Havilland playing Terry might have been thinking of her real sister Joan Fontaine and all the jealousy and hate between them (the two sisters apparently have not talked to each other since the '70s)

I had never seen Lew Ayres in a film before. He was not bad as Dr. Scott Elliot, I found him to be a good actor I would not mind seeing him in another film. He had the look of a doctor. This was actually his second film back after serving as a medic during World War II and in both films he was a doctor.
Robert Siodmak is a fabulous director. He captured every tick each character had and all their essential emotions.
The Dark Mirror is a very good Noir. Once you get a sense for who the twins are as characters you can guess which one could have committed the murder and is the disturbed one. The mystery is simple and is tied up nicely like all films had to be back then. What makes The Dark Mirror a top notch Noir is the acting by Olivia de Havilland and Siodmak’s direction. Posted by UneCinephile at 10:08 PM