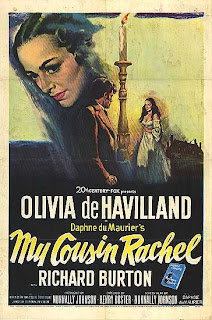 "She had done for me at last. Rachel, my torment"


My Cousin Rachel is one of the many novels British author Daphne Du Maurier wrote which was then turned into a film.
Philip Ashley is a young Englishman living in 1700s England. He has been raised by his cousin Ambrose all his life and loves and adores the man. One summer Ambrose travels to Italy to get out of the cold, wet English winters. While in Italy he meets a very distant relative named Rachel Sangalletti and he marries her. For two years Ambrose does not return to England he lives with Rachel in her Italian villa in Florence. After a while Philip begins to receive letters from Ambrose how he believes Rachel is out to kill him and takes his money. In his last letter home he urges Philip to come out to Italy as quickly as he can. Unfortunately by the time Philip gets to Italy his beloved cousin is dead apparently of a long illness of fever brought on by a brain tumor. Philip cannot believe his cousin who was a strong healthy man died of a brain tumor but unfortunately Ambrose’s father died of a brain tumor and everyone believes the tumor was hereditary.
A few weeks after his return to England, Rachel comes to see Ambrose’s home. She is not the wicked, ugly woman Philip had in his mind all these months but a sweet and beautiful woman. Rachel only intended to stay for a few weeks but on Philip’s insistence she stays for a few months. He has fallen for the woman even going to so far as to give her money since Ambrose left her none in his will and even some of the family’s jewels and going so far as to ask her to marry him.
The letters from Ambrose are always in the back of Philip’s mind. He suddenly becomes very sick. He is in his bed for many weeks. When he has recovered he finds poisonous pods from a tree outside his house in an envelope in Rachel’s drawer. Now he is convinced Rachel has never been any good that she probably killed Ambrose with special herbs she knows how to use and is most likely doing the same thing to him.

Now of course all I wanted to do the whole time I was reading the novel was to watch the film and compare the two. I was hoping that the film would be adapted well since Rebecca was so well done. Unfortunately the film cannot hold up to the book. I cannot help but compare the book and the film as well as comparing My Cousin Rachel to Rebecca in film form. In the book we are left wondering if Rachel could have killed Ambrose and made Philip sick. The film shows that as well but it does not keep the intensity and suspense of the book at all. I found it really hard to believe Philip was in love with Rachel because of the way Richard Burton was playing the character. He did not seem to be in love with the woman until after a certain point.
It is unfair that I should compare My Cousin Rachel and Rebecca in film form. Rebecca was made by Hitchcock who is one of the best directors ever and written by Ben Hecht who was one of the best screenwriters ever. Nunally Johnson adapted the novel and produced the film as well. He seemed more concerned with telling the love story then actually holding down the suspense. Du Maurier’s novels no matter what kind they are have suspense there is no getting around it but this adaptation of the story seems to have managed to get around the suspense.
Now I perfectly understand many things gets lost in an adaptation from book to screen but I felt there were important things taken out of the book. Some of the things were well changed from book to film but other things were taken out. One important change that I felt was not good was in the book there was a second will leaving everything to Rachel. Philip takes the will, has it rewritten along with some clauses and gives the will to Rachel. In the film the will is destroyed but still Philip gives everything to Rachel. The will is important and it was not played upon. What the film did hold very well was the did-she or didn’t- she aspect. Like the book we do not know how far Rachel’s involvement in Ambrose death and Philip’s sickness went, we are never told if she is truly good or bad. It reminded me of the story Trifles where we have to make our own accusations and come up with our own verdict if Rachel is guilty or not based on what evidence we are given.

I guess because I am so used to seeing how fantastic Hitchcock made Rebecca I was waiting to see a really good adaptation of My Cousin Rachel. Even if I had never read the book before I watched the film I would not really have liked it. The acting was fine Olivia de Havilland is a very good actress she was perfect because you can believe looking at her that she could have killed her husband and could be the kind of woman who is impulsive but at the same time she looks like she would do none of what she did. You can see something underneath the character through De Havilland. Richard Burton was alright I felt he made Philip too grumpy. Apparently the actors did not get along at all and knowing this you can see that they did not get along it showed in many of their scenes… but then again Rachel and Philip do not really have that much chemistry in the book. I cannot help but to compare book and film that will always happen to anyone. In book form the story is very good I enjoyed the book very much Du Maurier was a wonderful author. In film form My Cousin Rachel falls flat. It could have fallen flat because I liked the book and had high expectations.
I would not completely write this film off. The film is hard to find I’m not even sure it is on DVD. If it is ever on TCM try to catch it. 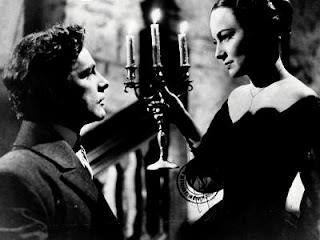 Posted by UneCinephile at 5:01 PM