I am sure you have never seen Le sang d’un poète or The Blood of a Poet or even heard of it unless you like the Surrealist or know who Jean Cocteau or Lee Miller are. It is not a film you will find anywhere unless you are looking for it. There are many branches of Surrealism including many artists not just Salvador Dali and his melting paintings. The first time I watched this film I thought I had just smoked something it is so…. I do not want to say out there it is different from what we generally see as a film.
I do not even know where to begin to explain this film. First of all it is in French and unfortunately every copy I have been able to find online does not have subtitles unless it is just a short clip. I understand some of it and I recognize words but for the life of me cannot remember what they mean (I almost got a D in French a few semesters ago, thank God my professor was nice and she gave me a C-).
I do know that the film is broken down into four parts. The first part is my favorite because to me if you want to know what Surrealism is all about and what the members believe in this is the part. It is about an artist who has painted a woman when all the sudden the mouth comes to life and begins to move. The artist wipes away the mouth in shock but when he looks down at his hand the mouth has now gone to his hand. After experimenting with the mouth all night (the Surrealist had some sexual issues/things going on in their works so you can take a guess what “experiments” he did) he puts his hand on a statue he was working on. Part two is the statue coming alive and speaking to him. She talks him into passing through a mirror that takes him into another place in time. The mirror transports him to a hotel- a hotel of “dramatic follies”- where he looks into the keyholes of several rooms. The first room shows shadows of someone smoking weed, the second shows a Mexican man getting shot by a firing squad over and over. The third room has some kind of kid who can climb walls while wearing sleigh bells. The fourth room shows a hermaphrodite. The fourth room was really interesting it is hard to explain how. Drums role and different sections of the person come up through holes in a chalkboard and the whole body is drawn. The artist is given a gun to shoot himself which he does but he does not die. He has enough of what he has seen and goes back to his world through the mirror. We do not see the actual man go through the mirror we see a wire cutout of him. When he gets back to his room he smashes the statue. Part three shows boys having a violent snowball fight. Some boys run for cover and one even gets his knee cut. One unfortunate boy gets pelted with a chunk of marble and dies from being hit in the chest.
The final part shows the boy lying dead on the ground with a woman (the statue) and a card shark (the artist) playing a game on a table. While they play a game two groups of people sit in box seats of a theater watching them. The card shark takes an Ace of spades out of the boys pocket. The camera cuts to a doorway where an angel comes down the stairs. The angel is the boy’s guardian angel and absorbs the boy. The angel takes away the card from the card shark and the man realizing he now lost the game shoots himself. The spectators applaud after the man shoots himself. The woman then turns into the smashed statue and walks away. In the end she looks like a real statue with symbols of art around her.

Yeah, I know I know just explaining it to you sounds so friggin weird. And I am sure you are asking yourself how could anyone watch this. Let me just say I am not one of those stupid art majors who is a hipster and only likes modern art like dog shit on canvas that represents a soul in torture. I like art until 1960 and then Andy Warhol comes in and all the other weird hippy artists and art goes to shit. I adore old films and I have since learned a little more about Surrealism and the artists so I can honestly say I like this film for artistic and historic reasons and not look like a hipster idiot (are you getting the feeling that I hate hipsters?). There is a lot of meaning in art and in this film there is a ton of meaning.
I first found out about The Blood of a Poet when I read a biography on Lee Miller. I was in the gift shop of the Tate Modern last summer and I saw the cover with Miller’s picture on it and I was so taken with it. When I got back to my room that night I looked her up and a few days later I bought the book. Miller was originally from Poughkeepsie, NY. She moved to NYC where she was founded by Condé Nast (the man whose company owns Vanity Fair and Vogue) and she became a model and was most famously photographed by Edward Steichen. Later on she moved to Paris and became the lover of the famous Surrealist artist Man Ray. At the time she filmed The Blood of a Poet she and Ray were not getting along very and Ray was very upset that “his” muse was being used by another artist; he felt Miller and her body were his. Ray said “You don’t lend out your mistress, do you?” If you ever want to read a great biography read Lee Miller: A Life (or On Both Sides of the Camera if you live in the UK) by Carolyn Burke. Miller’s life was so fascinating and incredibly lived. 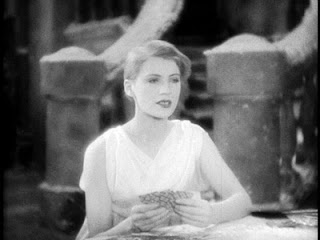 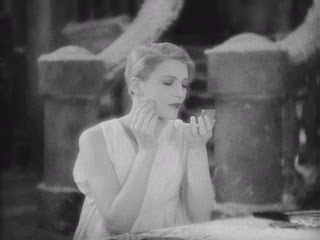 Cocteau said that The Blood of a Poet is not a Surrealist film because it did not exist at the time he made it. But he did use many of the motifs- chance, dreams, life and death- the Surrealists highly regarded. Looking at it today from an artistic and historical aspect it is one of the greatest cinematic works. Charlie Chaplin claimed that this film showed him that “the cinema could exist in Europe.” No matter how odd the film may be it really does hold your attention. I cannot turn the film off whenever I play it and I marvel at the film making. Cocteau pretty much stated that the film is like allegory of the things the mind can conjure when it is asleep, it is not about symbols and dreams but memories that move around and express themselves.
This must all sound like crazy artistic ramblings. I am sure you have very little understanding of the things I have written but to me it is genius. I will not lie when I say that Surrealism is a bit confusing especially because it has to do so much with psychology but the things that I can understand like their views of the world and their symbolism is so interesting.
Le sang d’un poète is considered Jean Cocteau’s best known and best made film. It deals with an artist’s obsession with creation and his views of the world in which he creates. Throughout the history of art artists have been driven mad by their creativeness and need to create perfection. This film is one of great artistic perfection and obsession both literally and figuratively. I can sit through The Blood of a Poet any time of day and be bewildered, confused, and shocked all the time.
“Poets . . . shed not only the red blood of their hearts but the white blood of their souls,”
- Jean Cocteau 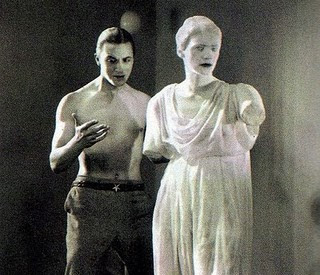 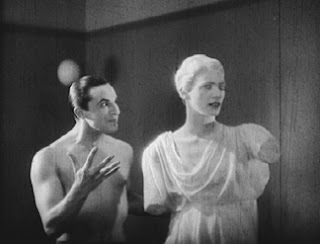 watch the film in full here

Posted by UneCinephile at 12:41 AM

Email ThisBlogThis!Share to TwitterShare to FacebookShare to Pinterest
Labels: Surrealism