“Well, it's time you got wise to yourself. Around this town the only reason friends pat you on the back is to find an easy place to break it.”
Bullets or Ballots is a plot that we would now only see on crime shows not movies. For the entire run it felt like I was watching a longer episode of Alias (watered down) or some cop show. This does not mean that I did not like Bullets or Ballots I did but I found it a little slow.
Johnny Blake (Edward G Robinson) is a tough cop. He takes down criminals before they can even look at him mostly because he is very quick and hard with his fists. Johnny is well respected and like by all his fellow cops. He is friends with a woman named Lee Morgan (Joan Blondell) who runs a “numbers game” and a night club. The police commissioner is killed by a gangster named “Bugs” Fenner (Humphrey Bogart) after he showed a film clip of him and his partner Al Kruger at the movies. The commissioner was a crusader in the fight against crime and the men who Bugs and Al work for did not like that too much. A commissioner, McLaren, takes over but he does not give out any information on how is to take down the gangsters and moral corruptors because he feels that is how they get away with things when they know what the police are doing. Johnny unexpectedly finds himself pushed out of his job.
Since Robinson is the main character and this is after the Production Code was enforced at this time he is a good guy he was only pushed out of his job so he can go undercover and find who is really running the show. Kruger does not suspect anything because Johnny has been giving them rackets to run but Bugs does not trust Johnny. He gives the men the idea to be partners with Lee in her numbers game but they want to push her out and take it over.
Johnny and the police eventually find out who is behind the racket and bring down Bugs in the process. The men who were behind the racket is pretty interesting, not too surprising if you have seen stories like this before but the way they operated was good and how they pulled the strings is good. I also liked how everything Johnny set in motion to happen like Kruger being taken out and he himself getting the top job over Bugs happened.
Alright so not the best review of a film I have ever written but I cannot give too much away and I will admit I was not paying too much attention to it because as I said I feel like I have seen something like this on TV way too many times.
I am not a big fan of Edward G. Robinson, I guess he is part of the reason I really did not pay attention too much. His character I felt would have been more interesting if it had been someone else in the role. Humphrey Bogart and Joan Blondell stole the entire film in one scene they had together. Thank god I found a VIDEO of it because it is hard to explain. To me it is actually kind of sexy and the only “romantic” scene I have seen with Bogart that I feel he is not awkward in. (to to the 1:51 mark to see).
I cannot complain in any way about the direction by William Keighley he did a great job. I can remember liking several scenes because of the way they were filmed.
Bullets or Ballots is an alright film; it was a major hit for Warner Bros when it was first released. I do like the way the studio got around the Code a little bit by making Johnny go undercover as a gangster but still be the good guy. Robinson had played the bad guy and the Code did not like that anymore they wanted him to be nice. As I said I wish someone else played the role of Johnny Blake I feel they would have been more believable and the character would not have been so boring. The film is a worth a viewing for Joan Blondell and Humphrey Bogart. 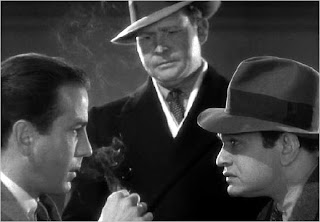