I love to study films during the 1930s. Almost all films made in that time period were made as a form of escapism for the audiences. The Great Depression took so much out of people but films especially, screwball comedies and musicals, put the fun back into their lives. Even in this modern age I find those genres to be so funny and up lifting. What I find with several of these comedies and musicals is that they usually have a thin plot, well, you are not supposed to be really paying attention to the plot you are just supposed to be having a good time. With musicals I find that to be especially true because you are waiting to see great dancing and singing numbers. Broadway Melody of 1938 is one such musical where the plot is not that great but the musical numbers are fantastic.
Broadway producer Steve Raleigh (Robert Taylor) wants to put on a new musical. He gains a new backer named Whipple and his wife Caroline. Caroline at first does not want to back a play but as soon as she sees how handsome Steve is she agrees… and so begins a load of problems for him and everyone else.
Caroline owns a horse named Star Gazer. She hires two men named Sonny (George Murphy) and Peter (Buddy Ebsen) to help take care of the horse. As they are caring for the horse a young girl comes by named Sally Lee (Eleanor Powell) and starts telling Sonny what to do. She tells him she used to own Star Gazer but her family had to sell him when the Depression hit. Caroline moves the horse along with Sonny and Peter onto the next race where Star Gazer is to compete. Stowed away in the feed bin is Sally. The two men find here and let her come along.
They sing and dance to the song “Follow in My Footsteps” when Steve comes in at the end. He liked what he saw of Sally and wants to put her in his play. Caroline walks in around the same time as well. She is not too happy to see this pretty and very talented girl around especially because Steve likes her. He goes to a talent agent he knows. The agent has Steve go through some actresses in a book but he does not like any of them he really wants Sally as the lead.

Caroline tells her husband to pull out backing Steve’s play. She bases it on the fact that Sally is an unknown and she is not worth the risk. The husband agrees and now Steve does not know how his play will go on. Caroline also gets rid of Star Gazer. Sally bids on the horse but when it gets too much she cannot get him. Luckily Steve comes through with the help of his friend but he gives the money to Sonny. Steve does not want Sally to know he got back the horse for her.
With the help of Sonny and Peter Sally enters the horse in a race and the horse wins a lot of money. Now Steve can put his show on with Sally in the lead.
Not that great of a plot I know but the musical numbers are awesome. Eleanor Powell was incredible. This was the first time I have ever seen her in a film and I was totally amazed by her dancing talent. Her acting was not bad at all she was adorable. Powell was known as The Queen of Taps and boy did she live up to the name! I read in a book last spring that when she was training in tap her teacher used to put sandbag around her waist to make her feet heavier so her taps would be harder. Because of that training she never had to dub her taps. I was floored with her dancing never have I been more jealous and upset at myself for never taking dance than when I watched her. My favorite dances she did in the film were “I’m Feeling Like a Million” with George Murphy and the finale. I seriously do not think my mouth could hit the floor harder than it did when Powell did her dance in the finale. I already loved her from her first scene in the film but with that number my love and adoration for her was solidified.


The rest of the cast was excellent as well. Judy Garland was fifteen years old and not as big of a star yet in this film. I was also floored with her, at fifteen she had the pipes to make anyone jealous. She sang two of her most famous songs “You Made Me Love You” sung for Clark Gable and “Everybody Sing.” Her character was cute I was cracking up with her the moment she came on screen. I have never seen Buddy Ebsen in a film before. I have heard of him because he was supposed to play the Tin Man in The Wizard of Oz. This was also the first time I have ever seen George Murphy in a film and I enjoyed both actors very much they were very talented. Robert Taylor did not sing or dance he was not really in the film too much. He was put in the film mostly because he was gorgeous and his career was really going in 1937. 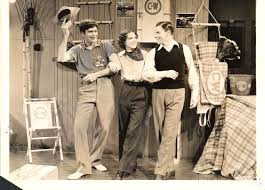 I have heard that this Broadway Melody is not as good as the first one and the one in 1940 but I really enjoyed it. I was left feeling so happy and in such a great mood when it was over. I can definitely see why musicals were needed during the Depression they just automatically lift you out of the worst mood and make you forget your troubles. Although the plot falls a little flat Broadway Melody of 1938 is not to be passed over especially because of Eleanor Powell.