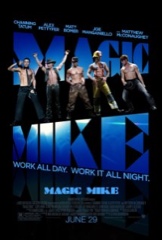 “Will you welcome to the stage, the one, the only... Magic Mike!”

Since I am a girl I felt it my right and my obligation to see Magic Mike. This is a movie about male strippers played by some of the most beautifully gorgeous men in Hollywood. It is bad enough I wanted to jump Alex Pettyfer before but now after seeing him shirtless with his delicious body as well as his ass… he has no idea but we are getting married, he does not know yet but we are (even though he is threes younger than but I am willing to pass that over). Pettyfer, Channing Tatum, and the other deliciously hot males in Magic Mike could not save it from being one of the most boring movies I have ever sat through in my life.
Mike (Tatum) is a very sweet guy who works multiple jobs to save up to start his own furniture making business. By day he runs his own small installation business and works construction. By night he is the super sexy stripper Magic Mike. He meets a nineteen year old kid named Adam (Pettyfer) who is living with his sister after losing his football scholarship for punching the coach. The night after they first meet Mike takes Adam to the strip club and he gets an opportunity to strip when one of the other guys cannot go on.
After this Adam becomes hot headed a bit and he gets into some trouble with drug dealers. Mike begins to like Adam’s sister and along the way starts thinking of his life and how the stripping thing is not working out for him. Blah, blah blah, hot boddies, blah blah blah, a naked gorgeous men, blah blah blah.
Seriously the story could not have been any more boring than it was. The ending was terrible. I just did not like all the characters even Mike got on my nerves at some points.
Magic Mike is not a movie I recommend seeing let alone paying to see. If you are curious about it wait until it is out on Netflix or Red Box (luckily I did not pay to see it since I work in a movie theater). Posted by UneCinephile at 11:54 PM