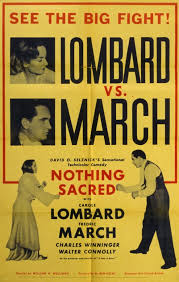 “It's kind of startling to be brought to life twice”

For a while now I could not for the life of me see why Carole Lombard is called The Queen of Screwball… until now. Nothing Sacred was hilarious. Lombard was the perfect comedic actress given one of the perfect comedic scenarios.
Wally Cook (Fredric March) was not on good terms with his boss Oliver Stone (yes the character’s name is Oliver Stone) when he convinced the man to let him do a story on a young woman named Hazel Flagg (Lombard)who is supposedly dying of radium poisoning. Hazel lives in the small Vermont town of Warsaw. She has lived there all her life. On the day Wally comes to town looking to speak to her, Hazel goes to her doctor who tells her he made a mistake she is not dying of radium poisoning. In a way Hazel is happy and upset at the same time; happy because she is not going to die and sad because she wanted to take the two hundred dollars the town would be giving her and live it up in New York City. Wally finds her at the right moment just as she is walking out of the doctor’s office and tells her he is a reporter and wants her to come to New York where she will be a symbol of courage.

Hazel does indeed live it up in the city only everyone she sees around her and meets is always sad. At a party given in her honor at a night club Hazel has a little too much to drink. She is asked to come on stage and passes out. Wally and all the club patrons believe she fainted because of the radium poisoning when in reality she is just very drunk. The next day Wally tells a recovering hung over Hazel that he is going to see the governor about her funeral. He also throws in that a radium specialist from Europe will be coming by the check on her even if there is no hope that she can be cured. This is news Hazel does not want to hear. She dramatically cries and tells her doctor who came along from Warsaw that the only way she will not shame herself and anger the people of New York is if she kills herself. She leaves a note that is eventually found by someone and that someone calls Oliver. Oliver then sends out all the fire and police departments around the city. Wally finds Hazel first. He accidentally pushes her into the river. He jumps in as well and then he realizes he cannot swim. Safely on the pier Wally and Hazel kiss and he asks her to marry him even if it would be for a brief time.

Hazel is found out by the radium specialist and his colleagues. Oliver is furious with her. He sends some men to pick her up but apparently she has pneumonia. He has told Wally the news. Wally is not mad he is happy because now he can marry Hazel without her dying. He gets to her apartment before the specialists are set to arrive again. Hazel is faking pneumonia but Wally insists that she has to look like she is sick. He makes her try to fist fight him to get into a cold sweat and make her heart race. Wally actually punches Hazel to knock her back onto the bed. Oliver comes in and has heard everything that was going on. He confesses the specialists are not coming. Hazel gets off the bed and gives Wally a good right hook to the chin.

With the newspaper and Wally’s help Hazel makes it seem as though she has vanished from New York. The paper publishes her letter to the city saying that she has had a good time and now she has to leave. Wally and Hazel along with the doctor are out to sea headed to Europe for their honeymoon.
Carole Lombard as I said mentioned was perfect. She was a little over the top but not fully. She had funny facial expression and body movements. I loved the scenes where Hazel was at the night club drinking and then passes out. Lombard played that wonderfully. It was a bit sad to hear her character talking about dying and living since she died five years later. Hell I got a little sad and cringed seeing her in a plane. On the other hand I loved seeing her character want to live her life even if she did it all on a big lie she had a good time and even fell in love. Fredric March I felt was playing the part of the woman. He was the one who got all broken up about Hazel dying and wanted to marry her and was all sad and depressed. He was alright. His best scene was when he was trying make Hazel fight with him. I must mention that Margret Hamilton makes an appearance as a shopkeeper in Warsaw.

Ben Hecht, my favorite screenwriter, wrote the film. Actually he had started writing the film. When the Selznick would not hire John Barrymore for the role of Wally Hecht quit and stopped working on anymore drafts of the film. I adore Hecht as a writer. He was very unforgiving. A lot of what he wrote still rings true today with the media- they are obsessed with sad stories and will nickel and dime everyone’s feelings until no one cares about it anymore. Hecht always seemed to be giving reporters and newspapers a bad rap. Hecht was a newspaper man himself for a while, maybe the job left a bad taste in his mouth and the only way he could work it out was to belittle it in a way by making the business look terrible.
Nothing Sacred is one of the best classic Screwball comedies I have seen. Besides the fact that the character of Wally is too sentimental (which I guess was a point, Hecht was making fun of the sentimentality of this sad story) the film was hilarious. Nothing Sacred is worth watching for so many reasons especially because anyone watching it with a modern mindset can understand all the sad things the media will do to a story and to a person. 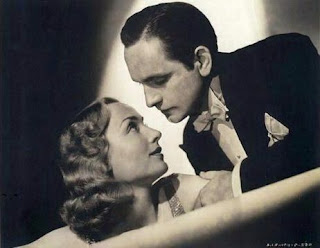 Posted by UneCinephile at 10:32 PM