“Almighty God, what is at play here?”

Fritz Lang’s 1928 Spies is one of the best silent films I have viewed. Like his 1927 epic Metropolis, Spies is nonstop from the first scene to the last. You get caught up in the world of espionage, who is the good guy and who is the bad, and even a love affair (why spy movie would be complete without a little romance?).
The German government’s secret service has been after a criminal mastermind named Haghi. He is always steps ahead of the agency and has recently had several of their agents killed. Mr. Jason head of the secret service brings in Agent No. 326 to find Haghi. Haghi’s latest objective is to get his hands on a treaty that is supposed to be signed by the Japanese and returned to the country. He goes so far as to bring in and blackmail a government official’s wife to make her tell where her husband will be signing the treaty.

Haghi’s agent inside the secret service has photographed 326. Haghi gives the photograph of 326 to his Russian female agent Sonja. He wants Sonja to fall in love with the agent and kill him. Sonja has some reservations one that Haghi points out is her falling in love with the mark. The inevitable happens. Sonja has been working with a man named General Jellusic who has been selling secrets to Haghi. 326 sees Sonja with Jellusic and believe she has betrayed his love. When 326 is out drinking away his sadness he is told that Sonja is a spy. For her betrayal of falling in love and refusing to do what she commanded Haghi takes Sonja prisoner and says she will only be free when either he or 326 succeeds. 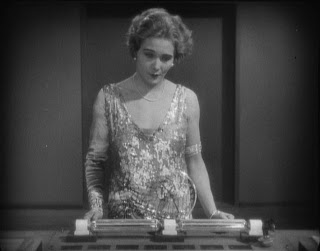 Hopefully you have seen enough spy films to know that the good guy succeeds and gets the girl. The ending to this film is very good. The reason for Haghi always being one step ahead of the secret service is someone you would truly never figure out.
Fritz Lang was amazing. His direction was flawless. There is a scene with the Japanese agent Matsimoto that was filmed to perfection it is a tragic scene but so well filmed. There are so many great scenes besides the one I mentioned. German silent films are becoming some of my favorite types of films and this is mostly due to Lang’s films because of his direction, sets, and stories. Lang wrote the film as well. The story is a spy story you would see written for the screen today. I wish spy movies today would have twists and turns like Spies.

I found Haghi to be one of the best bad guys in I have ever seen in a spy film. He was sinister looking you could just tell he was evil. What made Haghi scarier was how he was always ahead of the good guys. It seemed at one point in the film the good guys would never catch up even though they did literally right at the last minute.

Spies is an excellent silent film. It drags in some areas especially the “love” scenes between 326 and Sonja but the rest is just nonstop and intense. You will like Spies if you like James Bond, Alias or anything that has to do with the spy genre. Youtube currently has Spies in its original 146 minute cut rather than the 90 minute American cut (just know that the user who uploaded the film put terrible music to it).

Posted by UneCinephile at 9:19 PM