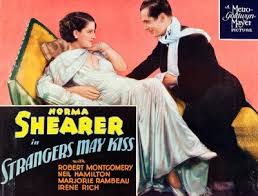 “We don’t believe in the awful necessity of marriage.”

There are some actors and actresses that play the same types of characters over and over again. This is especially true in old Hollywood. If you were good at playing a bad guy the studios had you playing a bad guy for the rest of your career. If you were good at playing sexy women who just wanted to have a good time but also wanted to be loved by one man you were cast as the amoral woman who the audience could sympathize with. Norma Shearer played the woman who was amoral and free with her sexuality but one the audience could sympathize with over and over again. Sometimes when actors and actresses play the same type of character in all their films it gets boring. With Norma Shearer I can never get bored seeing her play the promiscuous type of woman in her Pre-Code films. She was so good at it and knew just how to rope her men in and make them look like fools. In Strangers May Kiss, Shearer gets jilted and then goes looking for a good time leaving a string of men her in wake.
Lisbeth (Shearer) is in love with Alan Harlow. She has a childhood friend named Steve (Robert Montgomery) who is in love with her. Lisbeth tells Steve that she loves him but she is not in love with him. Her aunt Cecilia asks her when she is going to marry Steve. Lisbeth does not believe in marriage and has no plans to do in the near future.
Lisbeth, Alan, Steve, and Cecilia go out for the night. Cecilia has sent a cable to her husband Andrew who was supposed to be in Boston that they would be going out that night. At the restaurant Cecilia sees her husband with two women at his side and his friends at another table. Alan tells Andrew that his wife is there and drags him over to their table. The one girl Andrew was with is made that he was dragged away from her as they were having fun. She storms over to the table demanding he come back with her. Lisbeth and Steve take Cecilia home. Cecilia tells them to go back to the restaurant she will be alright by herself. Lisbeth tells Steve her aunt will never get over what has happened because she thought her marriage was beautiful. When they enter the lobby there is a lot of commotion. Steve walks over to see what has happened. Cecilia has killed herself by jumping out the window. 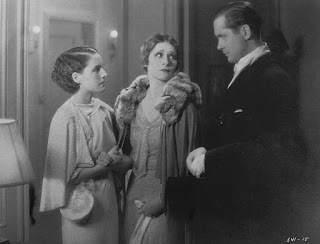 Alan has been away for two months. In that time Lisbeth has only received two letters from him. He comes back on Christmas Day just as Steve is coming back from Boston. Alan tells Lisbeth he does not want to marry her because he likes his freedom his job offers him and he does not want what to have to deal with anything like what Cecilia went through. Alan is leaving the next morning for Mexico for a year or two. Lisbeth decides to go down with him she cannot bare to be away from him anymore. While down in Mexico Alan tells Lisbeth he has a wife in Paris. She does not react she just asks him why it has taken until that moment for him to tell her. He just says that his marriage is not really anything. Later on, Alan is sent down to Panama. He tells Lisbeth that he is sending her back to New York. It is the end of their relationship but she cannot say goodbye. 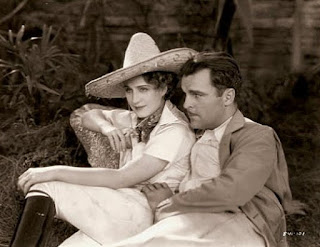 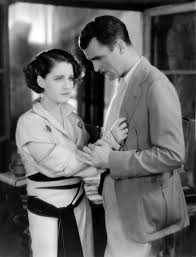 For the next two years Lisbeth travels around Europe having a good time with men wherever she goes. Steve show up while she in Spain. He tells her he has heard so many things about her especially in Paris. She receives a telegram from Alan from Paris asking her to marry him. When Lisbeth returns to Paris and calls Alan he does not want to come over. She goes to him and he says he has heard too much about her. He tells her she should have waited for him even if he was not coming back. Lisbeth rightly argues that she did not know that she would ever see him again.

Sadly, Lisbeth ends up with Alan after he was a jerk to her.
All the Pre-code films I have seen so far have been mostly ones staring Norma Shearer. It is funny to think that MGM has some of the best Pre-Code ever made and after the Code was past they came out with all these wholesome family films. The studio went from being probably the sleaziest to the most family friendly.  I find it odd that Norma Shearer of all actresses was the one who set the standard for Pre-Code women. She was never a siren she was not pretty enough to be one. Yet it was Shearer who was the sexiest and boldest of these women. Her characters were never a shamed for what they did they never apologized. Lisbeth went on a sex binge for two years, what is more bold and outrageous than that? Imagine a film with this type of character being made today? There are so many good lines in this film. The best one was when Lisbeth was staying with a Spanish count at his villa. The count was holding a party with seductive dancers. He leans over and tells her “This dance is to educate you. How you should arouse a man.” She replies, “A man shouldn’t need it.” In her case you can believe it. 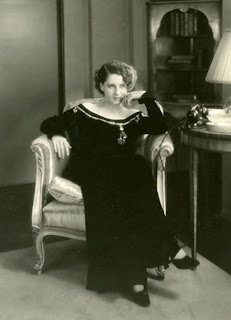 This is the second or third time in a Norma Shearer Pre-Code where Robert Montgomery winds up being the other guy the one she does not go home with. Montgomery was a handsome man but he in a way he is like Shearer he is not that handsome but there is something charming and a little sexy about him at the same time. I was mad that Montgomery was the man who kept getting pushed aside when it was his character Steve who really loved Lisbeth.
Strangers May Kiss is not the best film or Pre-Codes ever made. It is worth a viewing just because Norma Shearer was the “Pre-Code Queen” and you can clearly see why.

Posted by UneCinephile at 9:58 PM