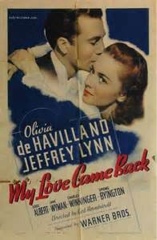 “Go into Swing music? No thanks, Dusty, I'll stick to real music.”
“But look, Amelia, Swing musicians aren't freaks anymore, they're artists with a new mode of music.”

My Love Came Back is yet another film where the title makes no sense with the story whatsoever. This always drives me nuts.
Amelia (Olivia de Havilland) is a violinist going to a prestigious music school in New York City. She is late for a concert and she has first chair. After the concert her professor tells Amelia she has been late several times. He will not let her explain her circumstances he just goes on and on. He tries to discipline Amelia but she gets so upset and throws something at the window on the door breaking it. Amelia finally gets to explain that she was giving lessons to make money. The academy forbids their scholarship students to work they need to focus on their music.
Tony Baldwin works for a man named Mr. Malette at a music distributing company. He has just become the president of the company over Mr. Malette’s son. Mr. Malette is now busy being president of the academy Amelia attends. He saw her perform at the concert and wants to help her. Mr. Malette sends Amelia some records and a new player.
Amelia’s friends Joy (Jane Wyman) and Dusty (Eddie Bracken) try to convince her to play swing music so she can make some money. She does not like the idea at first then she does after she plays it for a bit. Amelia informs the academy that she is leaving to join a swing band. Mr. Malette is there when she makes her announcement. He wants to give more money towards her scholarship.  Because of Mr. Malett’s kindness Amelia agrees to stay.
Mr. Malette takes Amelia all over town to hear music. He was supposed to go to a ball with Amelia but his wife caught hold of him and reminded him it was their anniversary. Mr. Malette tells Tony to go to the ball in his place with Amelia. Right away Tony thinks Amelia is Mr. Malette’s mistress and treats her poorly.

Paul. Mr. Malett’s son, sees that Tony has charged one hundred dollars for Amelia to the company account. He is determined to find out who she is because he is still upset at his father for not giving him the presidency position. When Paul asks Tony who she is Tony does not say thinking Amelia is the boss’s mistress. After this Tony goes to Amelia and talks to her like she is the mistress. He tries to tell her to leave Mr. Malette but she has no idea what he is talking about. Paul makes things even more complicated by telling his sister Valerie that Tony has been seeing Amelia. Valerie like Tony and becomes extremely jealous. Amelia meets with Paul. She tells him that the money that was given to her is for her scholarship and nothing else. Then Paul goes to see Amelia at her place and his father walks in. Now he thinks his father is seeing Amelia and he storms out. As he walks down the stairs Tony is walking up. Tony is upset he walks out of the building without going to Amelia’s.
Now Amelia is upset because Tony does not want to see her. Dusty gets his swing band a job. Their job is at the Malette house. Amelia thinks Mrs. Malette knows about her. The two women talk and everything is cleared up.
To make a long story short, Amelia and Tony get together after Mrs. Malette speaks to him.
Alright so maybe the title does fit to some extent but that happens at the end and the main focus is Amelia and her music not her and some guy.
Olivia de Havilland gives nothing short of a great performance. She was always fantastic. I just feel bad that she had to come off making Gone With the Wind but hey she was a star in the studio system what could she have done. Eddie Bracken and Jane Wyman were the best parts of the film. They were so funny together going back and forth teasing each other.
My Love Came Back was an ok film. The story gets a little silly and annoying after a while. I suggest only seeing My Love Came Back for Olivia de Havilland and Eddie Bracken and Jayne Wyman. It is not a film that needs to be seen in a hurry.

Posted by UneCinephile at 9:16 PM