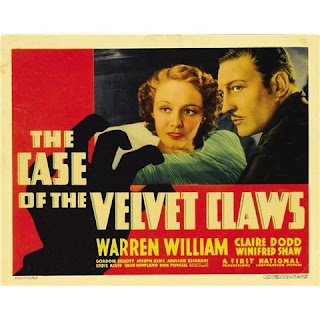 I am not very well versed on the character of Perry Mason. I know is a detective but that is about all. And there was a TV show quite a few decades ago. I recorded The Case of the Velvet Claw without even realizing it was a Perry Mason film. I just recorded it to watch Warren William. I enjoyed the story when I managed to follow it and I enjoyed William to no end.
Perry Mason marries his secretary Della Street (Claire Dodd). They are married by a judge who is a friend of his. They had planned to go away on their honeymoon but Perry knew his friends would prank him as soon as they got to the hotel so they go back to his place. When they arrive at the apartment, Della and Perry’s right hand man Spudsy come across a woman sitting in the living room. Eva has gun pointed at both of them. Perry walks in. Eva says that there will be an article printed up for a newspaper that is all lies about her and a man named Peter Milnor. Perry does not want to take the case at first since he is on his honeymoon but Spudsy burns some money and Della forces her new husband to take the case to get some of that money back.
Perry goes down to an office (for the life of me I cannot remember whose office it was or why he went there, I apologize). As he is walking out he is sweet as can be to the phone operator and watches her dial a number. He finds out the number belongs to a George Belter. Perry goes up to Belter’s house. The butler will not let him in the house so Perry improvises by going through the back door. He reaches Belter’s office. He tells Belter he is an attorney for a man named Peter Milnor. Belter’s wife comes in; it is Eva Stewart the woman that was in Perry’s apartment. After Perry leaves Belter figures out that that Eva went to him for help. He plans on slamming his wife in the papers. Eva gets upset and shoots her husband… maybe. She calls Perry to come over. She tells Perry she heard someone arguing with her husband and a gun go off. She also tells Perry that she is going to blackmail him and say he was the murderer.
Next, Perry goes to Peter Milnor. He calls Spudsy to get the name of the person who owned the gun that shot Belter. The gun belongs to Peter’s gun registered under a different name. Perry brings Peter to Belter’s house. The police are there now. Eva pretends to be upset and blames Perry for the murder. The homicide police go to Perry’s apartment. Della puts on an act that Perry was all nice and perfect when they first met and now he is always away from her for long periods of time.
Now that he is wanted for a murder he did not commit Perry and Della check into a hotel under different names. Eva manages to find Perry. She confesses that she was the one who killed her husband but Perry does not believe her story.

For the life of me the rest of the story is just gone from my head. I am upset with myself because I really liked it. On the other hand it did get a bit complicated to follow after some time there were so many twists and turns.
Warren William was fantastic. I am so used to seeing him as this men man it was great to see him be this sweet charming man. Claire Dodd I do not believe I have ever seen in a film before. I liked her too she and William had great chemistry. Perry and Della reminded me of Nick and Nora just without the humor or sophistication. They were sweet and charming, they just would not bite you with their words like Nick and Nora did.
The Case of the Velvet Claw what I can remember is a very good film. I enjoyed it very much. It left me wanting to see more of Warren William as Perry Mason. Warner Bros. Archive has a DVD set of the several films where William played the detective. I cannot wait to get my hands on that!

Posted by UneCinephile at 10:37 PM