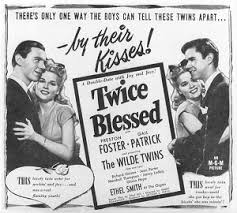 “So what? Columbus crossed the Delaware so can we!”

I am sure that many of you know the story of The Parent Trap. If you are my age you will remember the version with Lindsay Lohan (when she was sweet and most importantly clean). Now imagine that Hallie and Annie knew the other existed and also knew who their other parent was and you would get the 1945 film Twice Blessed. The twins in this film know who the other is and know who their parents are but they still have the challenge of getting their parents back together.
The film begins with Mary Hale (Gail Patrick) and her daughter Stephanie returning from their trip to South America. Mary is a psychologist who works to promote child welfare. One of the reporters, Jeff Turner (Preston Foster),  on the tarmac at the airport asks Mary how she raises her daughter. It is obvious that Mary is not too fond of this reporter, says a quick reply, and walks away. Next we see Stephanie hiding behind some luggage. Her mother walks past her and Jeff does as well following behind Mary. Stephanie calls out “Father” to Jeff. He turns around and gives Stephanie a big hug. Turns out, Jeff is Stephanie’s father and she also has a twin named Terry. Mary walks up to them asking how Terry is and when she can come visit her.
Mary and Stephanie go to Terry and Jeff’s apartment. Terry is very happy to see her mother and Stephanie to see her father. Mary asks her ex-husband if Terry can come home with her for the weekend but Jeff refuses saying they divorced because they could not agree on how to raise the girls. While Mary and Jeff talk, Stephanie and Terry go off on their own. They talk about each other’s lives and how they want what the other has. They decide to swap clothes and how they would like to swap places. In the living room Mary talks about marriage. Jeff thinks she is talking about marrying him but she was talking about marrying a senator. Mary gets upset and goes looking for Stephanie. The girls are still in each other’s clothes. They do not have a chance to explain the mix up as Mary drags Terry out the door.

The following day Stephanie goes to school as Terry. Since she is so smart she pretty much winds up teaching the class. Terry’s friends sit there flabbergasted they cannot believe Terry is that smart and has been hiding it. Terry as Stephanie has been invited to a Red Cross dance. She is in charge of a kissing booth but none of the boys come to her. She changes the prices and still none of the boys come by. Terry winds up grabbing this one boy and kisses him passionately. Everyone sees her do this and all the boys flock to her booth.
Jeff’s girlfriend Alice becomes suspicious of him when he is around Mary. Jeff takes Mary to a baseball game. They have a great time together and in the excitement they kiss. He asks her to marry him again. Mary throws back that he is not sensible about things when she is.
Stephanie and Terry meet up again. They each realize their parents still love each other. Terry and Stephanie want them to get back together as well but they think that will never happen. Jeff walks in the door (Stephanie is hiding) all excited. He has received a letter that Terry (really Stephanie) has been picked to be in an intelligence contest. Whoever wins the contest will be awarded a prize by Mary. Jeff sees this is great because Mary will be able to see that he is doing a good job raising Terry.
One night Jeff sends Alice on an assignment to get photographs of the type of crowd Stephanie is associated with. Obviously none of them realize that Terry is pretending to be Stephanie. Terry is a great dancer and she cannot help letting herself go when she hears music. Stephanie’s boyfriend keeps banging into another guy. The two guys bang into each other one too many times for their liking and they begin fighting. Pretty soon a brawl breaks out. Terry manages to get away. She finds Alice and tells her who she is and all about her sister and parents. Alice goes to Jeff with the photographs. He does everything he can to keep the photographs and story from being printed. Alice wants to marry him and he agrees. Neither of the twins is happy with this news. They get their friends together and ransack Alice’s apartment.
To wrap things up Terry and Stephanie help Mary and Jeff to get back together. 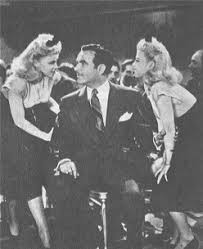 I thought the cast was great. I was so happy to see Gail Patrick play a nice woman instead of the other woman or the scheming woman looking to take the guy away from the nice lead woman. Or just being a bitch like she was in Stage Door. Preston Foster was fabulous. I enjoy him whenever I see him in a film. Lee and Lyn Wilde who play Terry and Stephanie were very entertaining. They were very much young girls of the 1940s.

Twice Blessed is a very enjoyable and entertaining film. It is interesting to see where I am sure the idea for The Parent Trap came from. But I must say Twice Blessed was more fun to watch because the girls know about each other and were able to really work together to get their parents back together.  Twice Blessed is currently available to view on Youtube. Hurry over and watch it before the site ever decides to take it down!

Posted by UneCinephile at 4:55 PM