Broadway Melody of 1940 is the last of the Broadway Melody films that began in 1929. Like most musicals (and films from the thirties and forties) there is a mistaken identity plot which I am constantly complaining about. Here it works out pretty well and does not get annoying.
Johnny Brett (Fred Astaire) and King Shaw (George Murphy) are dancers at a nightclub in New York City. They long to become famous Broadway stars but until then they have to work in a club and try to keep a collections agency off their backs. At the club one night is a Broadway producer named Bob Casey (Frank Morgan). He likes the dance Johnny and King do. He especially likes Johnny who he thinks is the better dancer. After the show Casey goes up to Johnny. Johnny thinks Casey is someone from the collections agency looking for him. Instead of giving his real name Johnny says he is King Shaw so that when he is served with papers they will have been given to the wrong man. Casey and his young partner Bert Matthews made Clare Bennett (Eleanor Powell) a famous Broadway star. Her shows are huge successes. Bert is now looking to cast someone as Clare’s leading man. Casey told about meeting a guy named King Shaw.
Johnny and King live together in a small apartment. Johnny is all ready to go out to casting offices to look for work. King is still in bed with a bad hangover. While Johnny is out King gets a phone call that Casey told Bert all about him and now Bert wants to meet him. At the casting office Clare walks in with Bert. Johnny is love struck. After every performance at the club he sneaks in to see Clare perform at her show. The secretary tells everyone who is waiting to leave the office Bert does not want to see anyone that day. Johnny leaves in one elevator and King comes up the other. King makes it to Bert’s office and is offered the job.
King tells Johnny about his meeting with Bert and being offered the job. He tells his best friend and dancing partner that he was not sure if he wanted to take the job since that would mean Johnny would not have one. Johnny encourages his friend that this opportunity should not be missed he has to be in the show.
Things go really well for King. Bert makes it so that King will be seen around town with Clare to create buzz about him for the show. The night before rehearsals are to begin Bert talks Clare into staying home since the following day is going to be busy. She calls King up with the excuse that she has a headache and cannot go out. King is furious and goes out for the entire night. Clare calls King again this time Johnny picks up the phone and accidentally tells her he loves her.
The next day King is late for rehearsals due to a bad hangover. Both Clare and Johnny make excuses for him but their excuses do not match. Bert dismisses the crew for lunch. Thinking that no one is watching him Johnny dances around on stage to a musical number from the show with a dance he had made up and told King to do. Clare stands off stage watching him. When he finishes his dance Clare tells him she likes his new version better. The two go out to lunch and have a good time together. At the theater everyone is waiting for Clare to return even King who is not happy with his friend for going out with his leading lady. Johnny tells his friend that he has gotten too big for himself with the little fame he has achieved and walks out not wanting to talk to him anymore.

Opening night Johnny has to say good luck to his friend as a ritual. When he gets to King’s dressing room King is blinding drunk. Johnny tries to get King to get moving before the opening curtain but to no use. Johnny goes on stage for the number and dances with Clare. King comes to with Johnny’s help. Being a good caring friend Johnny lies and tells King that he (King) went on stage and did a great job even though he was drunk. Clare is furious with King. The next day she goes to see her new partner and tells him he does not deserve the credit for Johnny’s work. 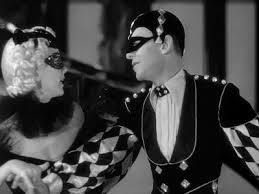 For the next show King writes a note to Clare that he promises not to get drunk and sends her flowers. He stumbles into the room and is again blinding drunk. Clare comes up with the idea to find Johnny and have him in the show. She finds him in the dance hall and drags him to the theater. Meanwhile King is in Casey’s office passed out on the couch. When Casey leaves he suddenly gets up and has a smile on his face. His drunkenness was a ploy to get Johnny on stage with Clare.
Johnny and Clare dance Begin the Beguine and become a hit.
Eleanor Powell and Fred Astaire were the perfect dance partners. Honestly no one ever danced better with Astaire than Powell did. They were such total perfectionists and professional dancers that every move they did together was completely in sync. There was not one foot fall, twist, turn, clap that was off. As actors they were a bit mismatched but as dancers they were heaven. Their dance to Begin the Beguine was beautiful. I have read that it is considered one of the greatest tap performances to be put onto film. From beginning to end of the dance there is no arguing with that consideration it was flawless and beautiful. Now, I think Powell was an alright actress she was more a dancer than anything else. Usually I think her acting is pretty good but in this film her acting was not too great. I am so used to seeing Powell this cute adorable woman and she was angry and yelling! Do not have a problem with that but it was weird seeing Powell so bad and charged up. She even hit George Murphy in the face in one scene. Astaire was nothing to talk about either he played the same love sick little boy-type character he always played. George Murphy was so-so. He was also a dancer and he was good but my god was he so out of sync with Powell and Astaire! Frank Morgan was a riot. He played a bumbling mess of a character and was so funny.