There are so many films about World War II it is rare today to see a film about the First World War. I know Downton Abbey is, at the time of this writing, currently taking place during WWI (or so I have heard I do not watch the show) but it is not a film. One of the many reasons why I like films from the 1920s and 1930s is because when they talk about “The War” they are talking about the one from 1914-1918. Most of the war films from the 1930s were about men fighting in Europe and while their wives and families were home waiting for them. Warner Bros. 1933 film Ever in My Heart is different. Instead of telling the story of the hardships on the Front it tells of the hardships faced on the home front of a man who was a peaceful American citizen, and was cruelly treated because he happened to come from Germany.
Mary (Barbara Stanwyck) and her family are waiting for the return of her counsin Jeff (Ralph Bellamy) and his friend from Germany. Jeff has been away a long time. Everyone keeps asking if Mary and Jeff will become engaged. Jeff returns home with his German friend Hugo (Otto Kruger). Mary is taken with Hugo immediately. For the next few days and weeks Mary and Hugo has been with each other. The help starts to talk about Mary being with Hugo. They all want Mary to be with Jeff. Her grandmother and other cousin are upset when Mary becomes engaged to Hugo. Mary sits down and talks with Jeff. He agrees the two of them drifted apart and is happy to see his friends together.

As the years go on Hugo becomes a professor at a college. He and Mary have a son named Teddy and he eventually becomes an American citizen. The day after Hugo became a citizen World War I begins. Mary’s brother Sam lost a friend on the Lusitania. He does not even want to stay in their house in a German atmosphere. Mary was supposed to be giving a tea party that day but all the ladies call and cancel. Hugo noticed that everyone backed out of playing tennis with him that day as well. Soon Hugo is let from his job at the college. He flips out on Mary when she suggests they go to stay with her family because they have never accepted him. More grief strikes the family when Teddy becomes ill and dies.
No one in town likes Hugo even though he is an American citizen. Even the kids in town hate him and they hurt his dachshund because it is also German. The poor god was do badly hurt by the kids Hugo shoots him. He cannot understand why Mary stays with him. He tells her to go to her family until he can get things straightened out. She does not want to but does so because she loves Hugo. Jeff and the grandmother come to take Hugo and Mary back home. The grandmother says that Hugo can work in the mill but if he does he has to change his last name. Hugo refuses it was his father’s name. He yells at them for not coming to pick up Teddy in the summer to get him away from the horrible heat. Mary collapses from exhaustion and hunger. Hugo tells Jeff and the grandmother to take her away he will come for her within a week. This is the first time they have been separated since they met.
A few weeks later Mary receives a letter from Hugo. He writes that he was allowed to be a citizen but he was not allowed to be an American. He has left America to fight for his people. Mary gets a divorce and soon after leaves to work for the war effort in Europe. Jeff is also sent to Europe. He confesses to Mary that she was the only girl for him and she says he should have been the only one for her. In a small café she has been working at Mary sees Hugo. She is so happy to see him but he just looks away. Jeff lets Mary know there is a spy in the division he knows all the divisions movements for the next forty-eight hours.
Mary goes back to her room. Hugo is there waiting for her. He is hiding because he is the spy. They still love each other and spend the night together. Mary had taken poison from one of the newest female workers. She does not want Hugo to be killed and she does not want to betray him. Mary puts the poison in both their glasses with telling Hugo. Mary holds Hugo in her arms. 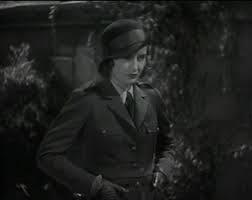 This was an early role for Barbara Stanwyck and you can already see she would be one of the best leading ladies of the screen. She was amazing. I love and adore Stanwyck in this film. She was a tough cookie as usual but she was strong tough not snarky tough like in her other Pre-Codes. Stanwyck did get a little overdramatic in one part but that can be easily overlooked she was so perfect. The ending could have gone totally wrong had there been any other actress but Stanwyck in the role. Mary had the courage and the sadness to do something so drastic as she did in the end and no other actress could have pulled it off so beautifully because they would have over played the scene. Otto Kruger keeps surprising me every time I see him in a film. I first saw him as the bad guy in Hitchcock’s Sabotage so he will always be a bad to me yet in his other films he has been nice. Kruger was a very good actor who I feel does not get enough credit. Ralph Bellamy was Ralph Bellamy the lovable guy who does not wind up with the girl. I love him even more because he never gets the girl.


Ever in My Heart was fantastic. It was fantastic because it was different. There is no denying that there are moments when it is melodramatic but come on this an early talking film and a film from 1930s and if you know your film history you will understand. It was so sad what happened to Hugo how he was discriminated against because he was German. The same thing is happening now and has for throughout history. Hugo was a good man and loved America because he loved an American woman. It was tragic that he no longer felt wanted in his new homeland and left his wife to fight against it. That is what made Ever in My Heart interesting to watch and what made the story so touching and good. Ever in My Heart is unfortunately not available to view on Youtube nor is it on DVD. I caught the film on TCM some time ago and if the channel ever airs it again definitely watch it.
Posted by UneCinephile at 5:24 PM