In Interrupted Melody Eleanor Parker plays a young Australian woman named Marjorie Lawrence who wants to become a famous opera singer. One day, with the help of her brother Cyril (a very young Roger Moore), Marjorie sneaks away from home before her father gets home to a singing competition. She sings a piece from an opera and she gets a chance to go to Paris to study. Back at home the whole family thinks her father will be angry with her for going to the competition. They are all surprised that he accepts by way of telling Marjorie he will say a prayer for her to stay safe in the big city.
An opera teacher in Paris at first does not want to see Marjorie. Marjorie overhears another singer struggling with a note so she sings the part outside under the window. The teacher takes Marjorie as a student. While away her father dies. She was going to go back home to work on the farm with the family until the teacher gives her a role in La Boheme. Marjorie becomes a big success. One night she meets Dr. Thomas King (Glenn Ford) after a show. They go out to dinner and dancing. The night was Thomas’s last night in Europe before he returns to America. Neither one of them wants to part. 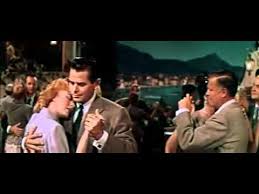 Marjorie is now being invited to sing all over Europe and has even been invited to sing in New York City. Thomas is at her performance in New York. He surprises Marjorie. They begin to see each other. Then for a few days Thomas does not call Marjorie. He tells her he has not called because she is already successful and he is just starting out. He wants a home and family and she is always traveling. Marjorie loves Thomas she decides to give up traveling to marry him.
Sometime later her manager gives her an ultimatum to go on tour for a patron. Marjorie does not want the part offered her she does not want to tour. Thomas makes her go so she will not ruin her career. They get into an argument. She wants Thomas to go with her for a while but he does not want to lose his practice. While she is away she becomes sick. The doctors call Thomas they tell him Marjorie has polio and will be paralyzed for some time. Marjorie just gives up she does not want to try to get better but Thomas does everything he can.
Marjorie and Thomas move down to Florida for a while where it is warmer. She eventually works on getting her confidence up by practicing her singing. Marjorie is asked to sing at a music hall but at the last minute she backs out worried that her voice is not what it used to be and that no one will like her. A few days later the mail comes with packages from New York. They are things from Thomas’s practice. She is so upset that he gave up his practice for her. She tries to kill herself but luckily Thomas comes home in time. Marjorie tells him that night that for them both to be happy he must go back to New York and she will join him in the spring.
One of Thomas’s friends is in the service stationed down in Florida. He comes to the house looking for Thomas. He suggests to Marjorie that she sing for the troops. She says that cannot do that she is in a wheel chair and the friend replies so are the boys she would be singing for. Marjorie sings for the troops in Florida which eventually leads her to singing for the troops overseas.
Marjorie’s entertaining of the troops works her confidence to the level where she feels she can sing in front of an audience in an opera house. She accepts the offer to perform at the Metropolitan Opera because her part allows her to sit down. At the end of the performance Marjorie gets up and walks a bit. The whole place stands and cheers.
The only other role I have ever seen Eleanor Parker in was The Sound of Music where she is not a very likable character. I liked her it a lot in this film she is a very good actress. I love listening to her talk she has a very raspy/husky voice that I could listen to all day. Parker could sing but not the way the opera needed to be sung so she lipped the songs. She practiced singing the songs and mouthing the notes so her lips would match the songs. Glenn Ford gets top billing even though he is not in the film too much. Eleanor Parker said this was her favorite film she made and she should have fought for top billing. She also said that Ford was a little difficult to work with and he always tried to upstage her.


Interrupted Melody was not a bad film. I am not really into films that have to do with operas. Sure I have watched quite a few Jeanette MacDonald and Nelson Eddy films that are all operas or based around performers in an opera but that does not mean I enjoyed them too greatly. I just enjoyed watching Eleanor Parker and Glenn Ford. Interrupted Melody is available to view on DVD. I caught it when it aired on TCM.

Posted by UneCinephile at 11:11 PM