“All my optimism was an illusion.”

We all want to believe there is a force greater than us guiding out destiny. We want to believe this guiding force is leading us to bigger things in life that will make us happy. I feel that this belief is what gets us through the day. I am a very broke post-grad who is working a part time job in a library. But I believe my guiding force (and other forces) will lead me to a better job one I can use my degree for and have me do fun things in life I have never done before. Some people in this world, however, are skeptical. They need to see it to believe it. With some of these skeptical people they can only see the rational. Anything that may need to be based on a faith or a guiding force they cannot see they immediately reject everything. Magic in the Moonlight takes a skeptic, makes him believe in an idea that is beyond reasoning and rational, and becomes happier person.
Stanley (Colin Firth) is a magician who pretends to be a person from the Far East called Wei Ling Soo for his performances. He is very well known for his tricks and performances around the world. One night after a show his friend Howard comes to see him. He tells Stanley there is a family in the south of France that has become enthralled with a young American girl named Sophie Baker (Emma Baker) who claims to be a medium of sorts. This family is obsessed with her except for the older brother and sister who thing Sophie is a charlatan. Stanley has called fakes out before and gladly accepts the offer. 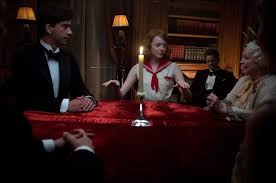 Honestly, I do not even feel like writing out too much more of the story. The rest of the story is typical: Stanley starts spending time with Sophie, Sophie starts to like Stanley but he does not even notice because he is too wrapped up in himself, Stanley believes Sophie to be a real medium when he feels he cannot prove how she has her visions, then he figures her out, and then he falls in love with her. That counts as boring in my book.
I absolutely adored Emma Stone in this. She definitely did not fit the 1920s time period, she is way too modern, but she was just really good. She did, however, fit very well in a Woody Allen movie. Colin Firth was good too but his character was so damn annoying. It was Woody Allen being played by another actor. Stanley was an annoying, self-absorbed man who kept telling everyone he was a genius and was neurotic with a lot of things. The two actors had absolutely no chemistry which made the ending of them falling in love not that great. I just could not believe them loving each other. It was not the age difference even though that was a bit weird that did make me believe their characters love for each other. I think it was the actors and their style of acting. As I said, Stone is a very modern actress. She is lose and has a big presence. Firth to me is still a good actor but he is getting to be like a curmudgeonly English man. I am sure that comes down the characters he has been playing lately as well. Ah, wait I know what it really was that was bothering me with the characters falling in love; they were totally opposite each other. Sophie was free spirited (no pun intended… or was it?) and Stanley was totally stiff and not relaxed. 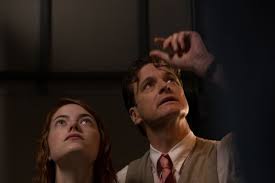 Magic in the Moonlight I felt was a letdown. I really, really wanted to like it but I just could not. I liked how it was set in 1920s France but I felt that it could have been set in any time period. I would guess the setting made things feel a bit more laid back and romantic but not that much. Magic in the Moonlight was not that great but it was not terrible. I will not say to not watch it, it is worth watching at least once. 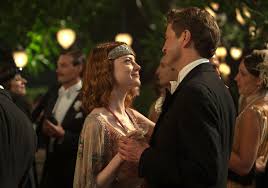