“One who is evil, looking for the first time upon that which is good.”

The most basic of movie plots is good versus evil. It has been done since the beginning of the movie industry. One genre of film that uses the plot the most has been Westerns. The wild west of the late 1800s/early 1900s was a hot bed of sin and corruption, according to the movies anyway. With all this sin and corruption a priest/preacher/parson was needed to keep the town in line. But this holy person could never really do it alone so the one decent tough guy in town that both the good and bad respected comes in to keep the peace. Usually this holy person has a sister or daughter and the somewhat good, somewhat bad guy falls in with. Basically, I just told you half the plot of the silent film Hell’s Hinges.
Robert Henley is a parson in a small town. His preaching is uninspiring because he does not fully believe what he is saying and therefore the people of the town do not believe him either. The other parsons want to send him away to a Midwestern town that desperately need a holy figure in their town to fight off the sin. Robert does not imagine being a righteous spiritual leader helping the faithful of the town, he imagines being the object of attention from the local women. His sister Faith has volunteered to go with him to help him get settled.
The town Robert and Faith travel to is officially called Placer Center but to the locals it is called Hell’s Hinges. It is full of sin and corruption and a place many travelers are told to stay away from. To the corrupt in town, the respectable people are called “The Petticoat Brigade.” This “brigade” are the ones who called for a new parson.
One man in the town of Hell’s Hinges is neither good nor bad. Blaze Tracey (William S. Hart) has done his fair share of killing and roughing but he can also have a nice side. The local big bad guy Silk Miller, who runs the saloon, has put Blaze in charge of running the new parson out of town. When Robert and Faith arrive, everyone in the town crowds around them to see the new blood. They are immediately taunted by the ruffians. Blaze comes over as well. As soon as he sees Faith is left speechless. For him it is love at first sight. He even takes his hat off in front of her to show some respect. 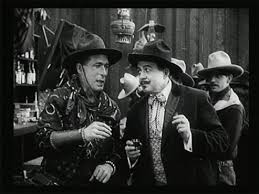 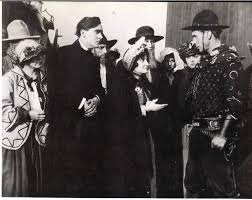 That Sunday a swarm of townspeople come to a barn where Robert is holding service to throw him out. Blaze comes and makes everyone leave. He winds up staying for the service but it is not to hear the word of God. He is moved by Faith’s kindness and love. 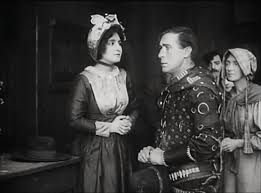 Robert had forgotten about his other “mission” to find women. He heads to the saloon under the guise of wanting to reform some of the women working there. The following morning he is not at the church for the service. One of the local bad guys tells the followers their new parson was down at the saloon all night and is a wild drunk. Blaze knows that Silk put Robert up to drinking. Robert spends the day in the saloon. Someone there calls to burn the church down. The sinful townspeople drag Robert out of the saloon to the church. A torch is put in his hand so he can burn what he had come to town for. The male followers of the church run to the building to try to peacefully hold off the others. Unfortunately a skirmish breaks out between the faithful and the evil. Robert is shot and killed. The church is set on fire. All the good people of the town are driven out into the desert.

Blaze was out riding in the desert as everything was happening. He sees some of the people running away. Someone tells him that the church has been set on fire and that Robert is dead. All Blaze is worried about is Faith. He thunders into town on his horse. He finds Faith mourning over her lost brother. In revenge, Blaze goes to the saloon. Silk was tipped off that Blaze had come back and is looking for revenge. Silk is ready for the reformed cowboy to come for him. With two guns in each hand, Blaze goes to the saloon. It is quiet, he knows what to expect. He opens the doors and fires immediately killing Silk. He holds up the entire bar. As he walks closer to the crowd of heathens and they walk backwards away from him, Blaze shoots the oil lamps down setting the saloon on fire. He tells them all they should get used to the fire because where they are all going that is all that will surround them.


Blaze, along with all the corrupt people, make it out of the saloon before it comes down. The entire town is now alight and everyone panics in the streets. Blaze finds Faith and takes her out of the town. In the mountains, far away from the town, Blaze watches Hell’s Hinges burn to the ground. Faith has buried her brother and cries for him over his grave. Blaze walks away and looks up to the sky and asks God to make Faith happy again.


Hell’s Hinges was a decent silent Western. I just recently finished my thesis for my MA in Museum Registration on actor-based museums and whether they can stay in operation. One of the museums I wrote about was the William S. Hart Ranch and Museum out in Newhall, California. It is a very interesting museum and was one of the first actor-based museums in the United States. When Hart passed away he left his ranch and house to the state of California. Everything in the main house and the ranch house are all original from when Hart occupied it. I wrote about the museum and William S. Hart without having ever seen the actor in a film before. I had read about him before and had seen him in a photograph that was taken of him with Mary and Jack Pickford. I believe I had also read about Hell’s Hinges a few years ago either in a book or on a program on the history of the movie industry and since that time I had been very interested in watching it. It is a good movie. The action was decent. Hart made a very good cowboy. I can see why he is considered one of the quintessential movie cowboys. He had the look for a good guy cowboy. Hell’s Hinges is a silent film I recommend seeing despite the typical plot. 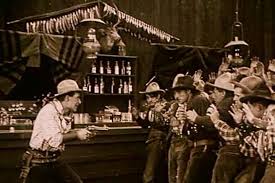 Posted by UneCinephile at 6:19 PM