“I’d never flirt unless it was necessary.”

The title of this film is a very good play on what happens and where the story takes place.
Ralph Preston is young divorce lawyer in New York City. He has enough of women coming in and making up stories and then trying to hit on him. One day after seeing a client and a mass of women waiting to see him he runs out of his office in a hurry. His friend Woodbury (Eugene Pallette) is waiting for him. Woodbury suggests going up north to Canada to a place called Mantrap for some time just to get away from everything. Ralph is a little hesitant because he has never been camping before and does not know the first thing about it.
A guy named Joe who lives in Mantrap is tired of living outdoors. He tells his friend that he has not seen any excitement in twenty years when he had gone down to Minneapolis and saw a woman’s ankle. His friend tells him that “Ankle ain’t the half of what they’re showin’ now.” When Joe gets to the city he is all confused and nearly gets hit by a car. He walks up to a sidewalk. He sees a pretty young girl come out of a taxi. Joe goes to barber shop to get himself cleaned up. The girl from the taxi walks in, she works in the shop. Her name is Alverna (Clara Bow) and she is the manicurist. Joe is embarrassed at first that his hands are so rough but she tells him she does not mind. When she takes him to a table he asks her out for dinner. Alverna replies that she does not usually go out to dinner with men but she likes him enough to go out to dinner. 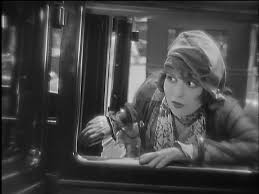 Woodbury takes Ralph to a department store to buy come camping clothes. He looks like a Mountie and feels stupid. When they get up north Ralph is not having any fun being in the wilderness. He accidentally knocks over a pot of food. Woodbury is so furious with Ralph he punches him. The two men get into a brawl. Joe is one of the men that comes and breaks up the fight. He invites Ralph to come and stay with him for a few days at his house while Woodbury camps out. Averna waits for Joe on the dock. When she sees her husband has brought home another man she fixes her hair and makeup. Alverna tells Ralph she is happy to see someone from New York City. She wants to throw Ralph “a nasty party” but Joe wants to invite their stuffy neighbors and the reverend he wants a respectable party. Alverna cannot stand their neighbors they are crabby and mean and do not like her one bit. Towards the end of the night Alverna manages to get the crabby neighbors out of the house. As soon as they leave she puts on some records and dances with all the guys there. She has a great time dancing with Ralph. Early that morning, Ralph is sleeping on the porch when he hears two Indians creeping around the house. He scares them off with his gun. Joe and Alverna come out to see what all the commotion was. Alverna and Joe go back into the house. She tells her husband that she is too scared after what happened she is going to stay up and read for a while. Really, Alverna goes outside to sit with Ralph.

For four weeks Ralph has stayed with Joe and for those four weeks Alverna has only had eyes for Ralph. She tries to kiss Ralph but he pulls away. The following day Ralph tells Joe he is worried about Woodbury and wants to go find him so they can head back to New York. Alverna decides to run away. She sees Ralph in his canoe on the river and calls to him from shore. She wants to go with him she is sick of Mantrap. Ralph tells her that Joe is his friend taking her away with him would not be honorable. Alverna gets angry and tells him that she will just walk home she has done it before. Ralph changes his mind he does not want her to walk by herself. He lets her know not to think of him as a man but as a means of transportation. An Indian lets Joe know that Alverna has gone away with Ralph. Joe grabs his shotgun.

In the woods, Ralph really falls in love with Alverna. He wants to write to Joe for him to divorce her. Their Indian guide deserts them and they are left alone to find their way. They see an airplane overhead and they wave it down. The pilot of the plane says he cannot take passengers he is supposed to be flying around checking to see if there are fires anywhere. Alverna starts flirting with the pilot and out of that they get a can of food. Ralph is mad at her for flirting when she said she would not flirt anymore. She tells him it was necessary they were hungry. Alverna sees Joe riding up the river in his canoe. Ralph goes to grab his gun. Joe comes ashore with his shotgun ready to shoot. None of the men do any shooting instead they sit down and talk. Joe tells Ralph he would rather save him from Alverna then shoot him. Ralph tells Joe that he will marry Alverna if he will give her a divorce. Joe had planned to send Alverna away to stay with his aunt in Minneapolis so she can have some fun in the city. Alverna lets them know that she is her own boss and when she goes to the city she is not staying with an old aunt. She takes the canoe and leaves Ralph and Joe behind.

Ralph and Joe get back to where they are supposed to be. Ralph is now back in New York at his office and ready to see his clients. Joe is back home and misses Alverna desperately. One of his neighbors asks him why he still love Alverna when she was no good. Joe defends his wife he tells the old cow that Alverna is a good woman. Alverna walks in the door fresh from the city just as Joe was telling the old woman off. They are both so happy to see each other. She tells Joe that she was very lonely in the city without him.
The cast of this film was very good. The only name you will of course know is Clara Bow. And possibly know Eugene Pallette if you are good at paying attention to character actors in older films. I think I have only seen Clara Bow in two other films besides this and I did not think she was anything special in them. I liked her in this though. When I think of Clara Bow I think of flappers with spunky attitudes and that is exactly what she was here.

Mantrap is a good silent film. Victor Fleming (Gone With the Wind, The Wizard of Oz) directed this and he did a great job. I am so used to seeing his epic 1939 films that it was nice to see one of his humble early films. I liked the title is a play on the small Canadian island that is literally a mantrap and on Clara Bow’s character to some extent. Mantrap is a funny and enjoyable silent film that if you can find you should give it a watch.
Posted by UneCinephile at 11:16 PM