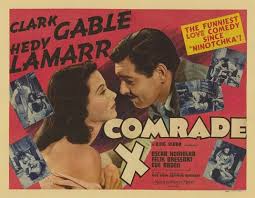 “You are the first American I have ever met with a soul. It has a strange effect on me”

As the poster says Comrade X is “The Funniest Love Comedy Since ‘Ninotchka!’” Ninotchka had been made the year before Comrade X. Both have a similar plot and similar main characters but honestly there is no comparing the characters. Garbo was funny but she still seemed untouchable as the Russian Communist doing and sacrificing all for her country. Hedy Lamarr was hilarious and personable as Theodore a no nonsense train conductor doing all for her Communist duty for her country. Even Clark Gable plays the same role as Melvyn Douglas only Gable screams American values while Douglas just screamed western democratic values and freedom. Ninotchka to me is more of a comedy with some drama thrown in while Comrade X to me is much more the comedy.
In Russia, a group of international reporters gathers together in the Kremlin. They are told about a person only known as Comrade X who is not allowed to leave the country. If they are found with Comrade X they will also be killed. American reporter McKinley Thompson (Gable) was supposed to be at that meeting instead he was out partying all night. He tells his friend Jane (Eve Arden) that there is no important news in Russia.
McKinley goes to a funeral for a Russian official that had been killed. He notices another funeral is taking place and realizes they are rebels. A man pops out of the coffin and begins to shoot at the crowd of mourners. McKinley manages to get a photograph of the man in the coffin. He knows he can get into serious trouble having a camera around so he runs away to not only conceal his secret camera but to also develop it and send it back home before anything happens to the photograph.
McKinley’s Russian friend Vanya tells him that his (Vanya’s) daughter is in trouble. His daughter is a Communist and he wants McKinley to take her out of the country. McKinley refuses he does not want any trouble with the Russian government. Vanya is forced to blackmail him by saying he will tells the police about his photographs and secret codes. Reluctantly McKinley agrees to the plan. He has to meet Vanya’s daughter on a street car where she is a conductor. She goes by the name Theodore (Lamarr) because in order to drive a name she had to change it to a man’s name. McKinley begins to sweet talk Theodore as soon as they meet. He drives with her to the end of the track where she is to leave the car for the next conductor. He tells Theodore about America and how she can help America’s women. McKinley almost got Theodore to go along with him until she turned him down. She is suspicious of him and will have him investigated. McKinley almost fools Vanya and leaves the country but Vanya knows he did not go through with his plan and will not let him leave. Theodore comes to the hotel claiming she has had him checked out and is ready to leave. She also springs it on McKinley that they have to get married in order to get out of the country.

After they are made man and wife, McKinley takes Theodore up to the hotel room. Another woman is there. Neither one of them recognizes the other even though they know the other in some capacity. The two women start a brawl. All McKinley can do is stand on the sidelines and watch his wife and the other woman work out their issues.

When Theodore is out of the room McKinley looks in her suitcase. He sees a framed photograph of a man. He realizes the man is the one who shot up the funeral. As he is walking out Jane comes walking in. McKinley tells her he and Theodore are now married. Jane is a little jealous she really liked McKinley. Jane has no idea how much of a Communist Theodore is. He tells Jane he is pretending to be a Communist but Theodore does not know that he is pretending. Eventually Theodore finds out that McKinley is not a Communist. She goes off the wall throwing things around the room and yelling. The secret police come. They take away his hidden camera in the radio. Vanya shows up. He tries to protect his daughter and tells the police that he is Comrade X. The police commissar does not believe Vanya for one second and has Vanya, along with Theodore and McKinley, into jail. McKinley goes to the commissar to tell him who shot at him at the funeral. The shooter is a man named Bastakoff. Theodore unfortunately adores the rebel.
Bastakoff is now the head of the police. He asks McKinley to hand over the photographs he took of him. Bastakoff has some of his followers killed. He is not upset about having to do this because he feels they were stupid. Bastakoff says Theodore and Vanya are idiots for naively loving Russia. Fortunately he lets all three of the prisoners go. Bastakoff has some men follow McKinley. McKinley shakes the men off his trail. He gets himself, Theodore and Vanya on a train. Theodore is very upset about Bastakoff. She is upset with herself for believing in such a man who would have his own followers killed.
The train stops at a military training camp. Theodore, Vanya, and McKinley manage to get into a tank. Theodore tells her father and McKinley she kind of knows how to drive a tank from going to night school. She tries to lead her tank away from the base but the new military tank trainees keep following her tank because the tank is the general’s. McKinley has Theodore drive the tank into Romania so they can surrender to the American consulate.
McKinley’s plan worked. In the end all he, Theodore, and Vanya are at a Brooklyn Dodgers game.
I absolutely adored Hedy Lamarr and Clark Gable in this film. Theodore was this staunch, stubborn, Communist that Lamarr played perfectly she was so fabulous and hilarious. The scene where she brawls with the other woman was hysterical. It was funny to watch Lamarr in this film because she was so beautiful and she always seemed to be put in dramas. Her comedic timing was really good too. This is the kind of role I like to see Clark Gable in. He was snarky and rude and funny. He was still a kind of tough guy only he was put into a funny yet serious situation. Think of Gable in It Happened One Night just toned down a bit and in a different situation and that is what he is like in this film. I do not think there was any chemistry between Lamarr and Gable but they just worked well here. Eve Arden plays Jane. I love seeing her in anything as soon as she opens her mouth no matter what she says is so funny because of her sarcastic tone of voice.


Comrade X is so much fun to watch. It is like Ninotchka in the several ways I pointed out at the beginning of this post but the film is able to hold its own. Some scenes such as the tank were a little out of hand and silly but scenes like the one where Theodore and the other woman get into a brawl completely make up for the silly scenes. Comrade X is a film I highly recommend watching. 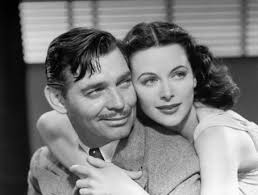 Posted by UneCinephile at 10:00 PM