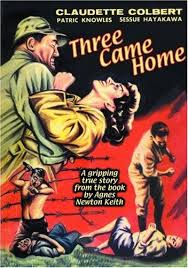 I like watching films from the 1940s when America was involved in World War II. I like watching how Hollywood responded and what types of war films they produced. I especially liked seeing the changed in the types of characters actresses from the 1930s played in the 1940s. Claudette Colbert was one of those tough, hardened 1930s women. She played to perfection Cleopatra in Cecil B. DeMille’s 1934 version. She was sexy and seductive. In the 1940s Colbert and many actresses were given parts of the obedient war wife with children and a home to look after while the men were away or they were war nurses who went through wherever they were stationed. Colbert played a variety of war women in the 1940s during WWII. In Three Came Home she plays the dutiful yet brave and strong and loving wife. Unlike the women on the home front her character is thrown into horrendous circumstances with her husband and young son.
Agnes Newton Keith (Colbert) is an American author married to a British soldier named Harry (Patric Knowles). Harry is stationed on an island in China. With the world now at war the British regiment wants to send the women and children back home to England for their own safety. Agnes does not want to go back she wants to stay with Harry. The Japanese begin to attack the island. The women and children are told to go to a government house and wait there. Unfortunately the Japanese take over the island and the British government cannot help them at that time. Some of the soldiers go to the government house and keep guard.
The next morning Agnes is ordered to go with a soldier while everyone else can leave. The soldier brings her to his commanding officer Colonel Suga. Agnes had written a book about the Barneo the island she lives on. The colonel tells her that while he was studying at college in America he read her book and liked it.
Orders are given that all Europeans living on the island are to be evacuated to a prison camp. The men and women are to be separated. They now live in terrible conditions. Sometimes the men walk by their camp leaving the women with only glances of their husbands. Harry risks dropping notes to Agnes as he walks by the camp, he drops a note one day telling her to meet him by a palm tree where other husbands and wives have met. Agnes barely makes it to the palm tree that night she and her son George have been suffering from a terrible fever. George’s fever is getting worse. One woman Mrs. Summer is watching George while Agnes is meeting Harry. She wants to get some medicine for him so she goes to the commanding officer to see about getting a doctor. The captain wants to see George and Agnes. Fortunately Agnes gets back just in time before the guards come.

The women are being moved to a different camp. The Japanese allow them to say goodbye to their husbands. Harry sneaks Agnes some handkerchiefs and a letter. Agnes reads Harry’s letter, he wrote to try to keep George alive. Finally the women are brought to a camp after spending ten days at sea. They are forced to work like dogs and are only given one meal a day. The days and years drag on. Agnes and George have not seen Harry in two years she has no idea if her husband is still alive.

One night during a storm Agnes gets out of bed to take clothes off of a line. All of the sudden she is attacked by a Japanese soldier. Somehow she is able to get the soldier away from her. When Colonel Suga comes through the next morning she tells him what happened to her and wants protection from him since she signed his book back on the island. A nasty lieutenant does not believe her story he wants her pick someone out. She tells him over and over again that it was dark she could not see who it was that attacked her. The lieutenant wants her to sign a paper that she lied about the attack. Agnes refuses to sign it. The lieutenant has someone come in and beat her to get her to sign. She let go with the promise that she will not talk about it anymore.

Sometime later everyone sees British airplanes flying overhead. They receive dropped letter from the allies that the Japanese have surrendered and help will be with them soon. Suga calls Agnes into his office. He tells her that his wife and son have been killed in the bombings of Hiroshima knowing that she would understand how he feels. Later in the day he takes George and some of the other children back to his place. He gives them food and watches them eat. As he watches the children he breaks down and cries.
Finally the allies come to the rescue. They open the gates and bring the men from the other camp to them. Agnes and George patiently wait for Harry. After agonizingly long minutes Harry comes to them.

Claudette Colbert was amazing. She was perfect for the part because she played women like this before. She played women who have suffered so much yet they fight to live and be happy. What I really like about Colbert in the part is that she did not overact. There were so many scenes that other actresses in the part could have overacted but Colbert played them so well. Patric Knowles was not in the film long but he was great with Colbert. I always enjoy seeing him in a film.


Three Came Home is a great film. It is one of the better war films about women I have seen. It is a great example how women stuck together during the time of war and through awful conditions. I also liked how Col. Suga was not portrayed as the totally evil or sadistic Japanese soldier. He was cruel yes but he had some kind of heart to him. Three Came Home is a film I absolutely recommend seeing especially if you like Claudette Colbert or films about World War II.

Posted by UneCinephile at 11:03 PM