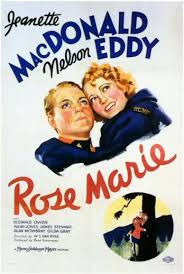 "I thought all this would make you more merciful"
"Don't ever think that Nature is merciful.Nature is the cruelest policeman.When an animal sickens, the others turn on him and kill him"

Rose Marie is the second Jeanette MacDonald/Nelson Eddy film I have seen. Quite fitting that this the second of the pair’s films I have seen and this was the second film they had made together. Like all their films this is an operetta this one set in the Canadian woods.
Marie de Flor (MacDonald) is a famous Canadian stage actress. Her latest show is a musical of Romeo and Juliet and it is a huge hit. A rich man named Teddy wants to marry her. Marie does not want to marry him she says she has everything she could want in fame and money. What she really wants is her brother John (James Stewart) out of jail. John was put in jail for having a gun that someone used to shoot a man. Marie is upset that he is not being released for the crime he did not commit.
Marie has the Premier of Quebec to her apartment. The staff has to get everything prepared in a hurry. Myerson, her agent, can see that something is worrying Marie. She said she will tell him her trouble another time. A comes to the apartment. He gives Marie a ring that belongs to John. The man tells Marie that her brother has escaped from prison and is now hiding out in the woods in the Quebec wilderness. Marie wants to get to John to help him as soon as she can.
Marie arrives at a port town in Quebec. The small town is rough and hickish for Marie. There are Indians and half breeds all over the town. A man named Boniface has been assigned as her guide. He is not a very good man he steals Marie’s wallet when he saw how much money she was carrying around with her. The owner of the hotel tells her to go to the Mounties to possibly get her wallet back. Out on the streets Marie panics when she sees a wanted poster for John. Marie cannot find Boniface and her money which she needs. She goes into a saloon and asks for a job which she lands. No one pays attention to Marie at first because she is singing an opera song. Then she starts singing a new tune that the locals can understand and they turn their attention to her. A man named Sgt. Bruce (Eddy) had been put on her brother’s case after he escaped. He followed Marie out to Quebec. He talks to her and asks her questions and even takes her to an annual Indian fest. Marie does not tell St. Bruce the real reason she is in town. At the fest she finds Boniface and makes him give her money back and to be her guide.

Bruce falls in love with Marie. He was talking to someone about her and he realized her last name in English means Flower. Bruce puts two and two together and knows the real reason Marie is in town. Out in the woods Marie sings a song. Bruce hears her and picks up her trail. He saves her from drowning after she falls off her horse in a lake. Bruce makes a camp for the night. Marie does not want to stay with him she is anxious to find Boniface and get to her brother. Bruce knows she will come to his camp and she does when she gets scared of a deer. He tells Marie to give him her clothes to dry off. When he gets the clothes he looks for any evidence of John. 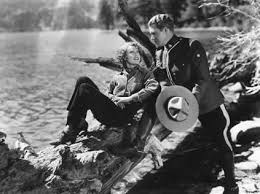 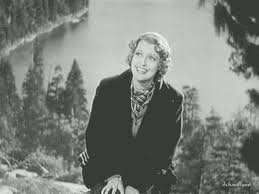 Marie gets away from Bruce and finds someone who will bring her to John. Bruce catches up with them. He had planned on taking her to John he made the whole thing a game. The whole situation is made harder because they really loved each other.

Back in the city, Marie is in the middle of performing on stage when she thinks she can hear Bruce singing to her. She collapses on stage. For months Marie has not sung a note she says she does not care if ever sings again. Everyone knows she is saying that because she is heartbroken. Out of nowhere Marie thinks she can hear Bruce sing. When she turns around Bruce is really there singing to her.
I adore Nelson Eddy and Jeanette MacDonald together. I love their chemistry. From the little I have read about MacDonald she and Eddy were apparently in love in real life so their chemistry on screen was very real. As I did with Sweethearts I fast forwarded through the musical numbers. I love musicals but the opera music is just too much for me so I skip them. I like Nelson Eddy and Jeanette MacDonald as actors better than singers. James Stewart was just at the beginning of his career. It is funny to see him in his early roles. It seems MGM had no idea what to do with Stewart at this time. The same year he was in After the Thin Man and played a not so good character (which was also directed by W.S. Van Dyke). With his looks Stewart could never have been a believable bad guy. 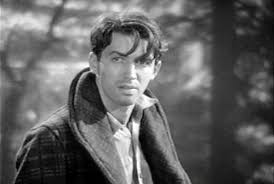 Rose Marie is dated now but back in 1936 in the Depression this was the perfect kind of film to lift spirits and just to have a good time watching. As I said I enjoyed the acting more than the singing. I really liked the ending for some reason it was a bit cheesy but very sweet. Rose Marie was made for audiences to forget their cares and have fun for its run and even to this day it makes you forget your cares and have fun watching.
Posted by UneCinephile at 11:06 PM