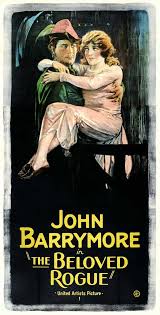 “Master Villon your pen has done more for France than any sword ever could.”

Francois Villon (John Barrymore) is a poet, pickpocket, ardent lover of French women, and a loyal patriot to France. His father was a loyal patriot who was burned at the stake during the first war between France and England. His mother had asked God that her son would have his father’s heart.
The small section of Paris where Francois is from are having a parade. They look all over the town looking for him. Francois and his two friends are out stealing silver and wine. He is found by some of the people in the parade and he is crowned King of Fools.
Burgundy is again trying to invade Paris and take over France. Louis XI is king. He is a slave to astrology. He is told that if he makes an alliance with Charles, his Burgundy cousin, France might be saved. He travels with Charles through the section of Paris that is celebrating Francois’s crowning. Louis knows that Francois causes trouble with his poetry and his thieving. When Francois makes a poem insulting Charles the king has the poet banished from the city and if he steps foot in it he will be arrested and killed. Louis was traveling with his ward Charlotte when this event occurred.
Louis has given Charlotte’s hand in marriage to Thibault from Burgundy. She does not want to marry him she wants to marry for love not to please Charles. She is to travel back to her hometown to marry Thibault. The night becomes stormy with snow. Charlotte and the traveling party are forced to take shelter at an inn. At the same time Francois and his two friends are planning to steal a cart full of meats and sweats meant for the king from Charles to give to the people. Their plan works but the men are forced to scatter and run. Francois crashes through the roof of Charlotte’s room at the inn. He sees that she has a book of his poems. She saw him dressed as a clown she does not know that he is the author of her cherished book. At that moment he does not tell her who he is. Thibault comes into the room. Francois tries to hide but that backfires. He takes Charlotte away with him which pleases her since she does not want to marry Thibault. Francois takes Charlotte to his mother’s house to keep her safe. 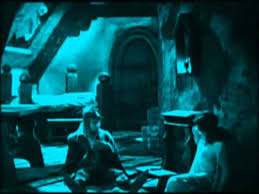 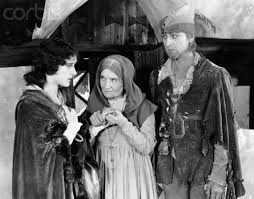 The king hears Francois is in Paris. He orders the poet’s arrest. Francois had told his mother that he was working for the king. His lie backfires when he is arrested. He is taken to the palace where Louis gives the order for him to die. Charlotte tries to beg for Francois’s life but the king will not consider it. To save himself Francois makes up a poem about the king’s death. Since the king is superstitious he questions what the poet is talking about. Francois tells the king that his (Louis’s) will be an hour after he (Francois) is hanged. The king now does not want any harm coming to Francois’s life.
Francois now lives in the palace and guarded all day and night so that nothing bad will happen to him. He is bored and has to repeatedly ask for his two friends to come to see him. Francois looks out a window in his room and sees Charlotte in the garden. He goes to her but she is not very happy to see him because he lied to her.
Charlotte is later kidnapped by Charles. Francois escapes the palace and gathers his peasant friends to help free Charlotte. He is captured by Charles and tortured and sentenced to die. Before Charles has Francois killed, the poet gives a speech about how his father fought the English to save France. He will not let the Burgundies take over. The king is there in disguise. Just as Francois was about to be killed Louis reveals himself and says that he is still the king of France and orders Francois to go free. He has Francois pick the punishment for Charles. He has Charles judged before his court of fools. Charlotte loves Francois but she cannot marry him because she has a title. The only way she can marry him is if she gives her title up. They both go to Louis and tell them of their plans. The king is upset to see his friend go


The Beloved Rogue was alright. John Barrymore’s overacting grated on my nerves after a while. Conrad Veidt made a really, really creepy King Louis. The story was a bit boring and predictable. There were definitely some scenes that needed to be trimmed or should not have been included in the final cut. I will only suggest watching The Beloved Rogue if you are a fan of John Barrymore.

Posted by UneCinephile at 11:12 PM