“If you step out that door, you're an Avenger.”

Marvel’s newest Avengers movie Age of Ultron is an MCU fan’s dream come true. All the superheroes are given a great amount of screen time and character development and two new really awesome heroes are introduced.
The latest bad guy in the Marvel Cinematic Universe actually comes from within the Avengers team. At the beginning of the movie the team has found Loki’s staff that holds one of four extremely powerful stones in a small remote European country. Back at Avengers headquarters in Stark Tower, Bruce Banner (Mark Ruffalo) and Tony Stark (Robert Downey, Jr.) figure out they can use the power of the stone to protect the world from invasion from different realms. Tony wants to do create this protective barrier after New York City was attacked by these alien things and prevent more from coming through. Bruce does not like the idea of using the stone as a way to protect the world but he goes along with Tony. That night there is a party at the headquarters. Since nothing is happening with the stone and what Tony and Bruce want to do with it, Tony has Jarvis scan for things that will make the stone work the way he wants it to. Well during the party Jarvis helps to bring to life Ultron (voiced by James Spader). Unfortunately and very quickly Ultron is not kind like Jarvis. He immediately hates Tony and everything that humans have done in the world. Ultron attacks Jarvis and shuts him down. He transfers his information to one of Tony’s droids and physically attacks the Avengers after their party.
Now Ultron is a major threat to the world. He wants to bring down mankind and create a new world with machines. He takes the form of an imposing mechanical figure and recruits twin brother and sister Pietro and Wanda Maximoff with great super powers. 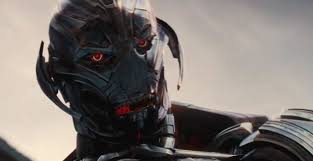 The Avengers have to stop Ultron from destroying the world and deal with each other.
I can only say so much about the cast without getting redundant. They are all amazing in their roles. Elizabeth Olsen as Wanda/Scarlet Witch and Aaron Taylor- Johnson as Pietro/Quicksilver were awesome additions to the Avengers. I liked their characters and I really liked how they played their characters. I cannot wait to see more of them in future Marvel movies and how they interact with the rest of the team.

I am going to give a minor spoiler away here and I am sorry but I need to fan girl over it so bad. If you have read the credits list on IMDB or have read any article lately pertaining to Agent Carter or Hayley Atwell you will know that both character and actress make an appearance in the movie. I thought Atwell’s appearance was going to be through a flashback but it was not. How Peggy Carter is brought back very quickly for Captain America I will not say but I will tell you that it broke my damn heart. Seriously, Steggy is like one of the most heartbreaking and horrible ships to ship. But I cannot help myself I love them as characters and as a sort-of couple way too much. And Steve makes a mention at the end how his job now is just be a soldier he does not know any other life and his chance for a family and a normal life passed seventy-five years ago. COME THE HELL ON MARVEL!!!! YOU’RE KILLING MY FEELS!!!! (Good lord I am such a such a raging fan girl. I apologize. I'll get myself together one of these days into a normal twenty-seven year old I promise).

Steve Rogers is emerging as the leader of the Avengers. He is the perfect choice because despite everything he has seen in mankind since he was unfrozen he is still has the same morals and values as the skinny kid from Brooklyn. He is the good, wavering man out of all the superheroes. There is not a vain bone in Steve’s body he is all about helping others.
Natasha and Bruce are an item now. When the hell did that happen? I understand that maybe the writers were looking for a way to dig deeper into Bruce and Natasha as characters and show character development but I did not that like that all. To me showing how they are getting closer to each other was just unnecessary to the story. There are probably countless numbers of ways to develop the characters rather than having them become a couple. I applauded the writers of The Winter Soldier for not making Steve and Natasha a couple and developing them as friends and now I am going to give them a jeer for their turn around.
While I did like Age of Ultron and where it brought all the characters for future movies I did find it a little boring. There were some parts I felt were just too dragged out and some of the scenes and story lines were just totally unnecessary. Like all of the Marvel movies there is a message. I cannot put my finger on a solid message I will say that the message was about technology. We praise technology but there are certain areas in life that technology has its limits. And then of course there is always a moral message in Marvel movies and there is one here. Age of Ultron is great to experience in theaters on a big screen but if you have trouble sitting for long periods of time in a theater like I do (thanks ADHD) than wait for the movie to be out

Posted by UneCinephile at 5:19 PM