“You could grab the past and drag it with you like a bag of rocks. You can grab that new diet with grape fruits, and a brand new exerciser, and maybe that new washer-dryer set. You can grab and grab and grab, 'til your fists turn green. You can grab everything you ever wanted. Shake it. Try to make it go boom. Yeah, you can never ever grab enough. Pop!”

I wish I could just pack up and go. Leave my house and my family for an adventure to anywhere. I am twenty-seven and bored at shit living at home in a town that voted one of the most boring places for young people to live and working a shit part time at a library where I get hit on by old creepy guys. If I had the money and a car that worked I would pick up and leave in a heartbeat. My mom told me I should move out to California and live with my uncle but I am not going anywhere without money. I literally have less than two hundred dollar in my bank account right now. If I were to go places I would want money so I can enjoy myself and not stress the fuck out over not having any money to do anything or go anywhere else.
I wish I had the guts to pack up and go like Luli McMullen (Chloe Grace Moretz) does in the movie Hick. The girl is thirteen and has the balls to leave her home to travel to Las Vegas where she thinks she will find a sugar daddy. I would not go to Vegas I would want to head out to California so I keep in tuned with the movie scene (as a fan and watcher of movies not as an actress. You do not want me to act)… also the weather is ten times nicer than New Jersey’s.
Luli lives in a small town in Nebraska. Her parents are alcoholics and never really pay any attention to her. After seeing a commercial of show girls in Las Vegas Luli decides to run away. While walking she gets picked up by a guy named Eddie (Eddie Redmayne). He says something she does not like and gets out. Luli then gets picked up by a sweet southern girl named Glenda (Blake Lively).

Glenda and Luli travel together for some time until they come to this guy’s house. Glenda is apparently working with him in some capacity. When they get to the guy’s house they see Eddie is now working for the guy and neither girl is very happy to him. Eddie convinces Luli to go out with him to leave Gelnda and the guy alone. Eddie is a dick. He basically kidnaps and rapes Luli and ties her up to a bed. The following day Luli wakes up to Glenda in the room. Glenda recalls her story about her and Eddie. Eddie comes back into the room. He has a gun which he says is not loaded but it goes off and there was a still a bullet in it that winds up killing Glenda. Eddie tries to smooth things over with Luli but she grabs the gun and kills Eddie.
Luli makes it out. She gets help from the hotel owner Beau (Alec Baldwin). He brings her to the bus station. Luli calls her mother but her mother has other shit going on that makes Luli not want to go home. Beau puts her on the bus with a note in her sketchpad telling her where to find him and his sister out in California.
I was bored watching Hick. It literally took me three days to watch it because I would get bored and fall asleep. It was not god awful but it was not fun to sit through. The story did solidify that I will never travel without money or a car. I never ever want to end up in a situation like Luli’s! I will not say to skip Hick it was not that bad but it was not that great for me to even say it is worth watching once. 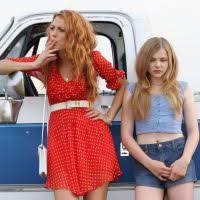