One of the reasons I like watching classics films, especially ones from the 1940s during World War II, is to see the mindset of the time. With war films I like to see the propaganda machine. I like to see how pretty much every film be it a comedy or drama dealt with the war. There was no such thing as being politically correct at the time so if someone was supposed to be a German or Japanese they were shown in an extremely terrible way. The studios got their point and the point of America across in their films. The studios produced some of the greatest films of all time during this period. Unfortunately China Girl is not one of those great war films. It falls so far down the pit it cannot see the light.
Johnny Williams (George Montgomery) is a war photographer in China. He has been taken to see the Emperor of Japan who has been invading China and killing the people. The guards dragged Johnny out of his hotel room, took his camera equipment, and threw him in a cell. The Emperor tells Johnny he wanted him as a guest. He also wanted to make Johnny a deal to photograph the Burma Road and he will pay him nicely. Outside the window Johnny watches as Japanese soldiers massacre Chinese civilians who were supposedly spies. After seeing that there is no way Johnny wants to work for the evil man.
Johnny is thrown in a jail cell with another man named Bull Weed (Victor MacLaglen). Both of them are to be put to death the next morning. A woman named Fifi comes into the jail to say goodbye to Bull. They get into an argument and she knocks him out. The whole lovers’ quarrel scene was a farce. Fifi gave Bull a gun so he and Johnny can make their way out. They make their way out of the prison and meet Fifi on the road. She drives them to what is supposed to be an abandoned air field. There is a plane there which surprisingly has gas in it and Johnny is able to fly it. He flies the plane to Mandalay. The US Army shoots at him so he lands the plan. Fortunately he knows a guy in the unit that was shooting him. 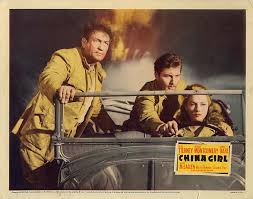 In a nearby hotel Johnny and his army buddies grab drinks. When the drinking is done Johnny walks into the hotel lobby. At the same time a beautiful young woman named Haoli Young (Gene Tierney) walks in. He sits down next her and just begins to talk. When Haoli says she has to leave to meet someone Johnny walks with her and even carries her package for her. Haoli is taking a pair of antique vases to a seller named Jarubi. Johnny knows the seller and he is not a fan of him. In the street Johnny is attacked by a group of men. He manages to fight them off. He tells Haoli to take a cab to Jarubi and he will get the vases to her later that night.
Everything works out with the vases. Haoli takes Johnny back to her house. She introduces Johnny to her father who is Chinese. For some reason Haoli’s father being Chinese makes Johnny mad and then she in turn gets mad at him and he leaves her house. When he gets back to the hotel Fifi is there and the two of them begin drinking. They go to his room but before they can really do anything they see Haoli sitting in a chair waiting for him. Johnny is excited to see Haoli again he really likes her. He rushes Haoli out of the room and gives Fifi the brush. Fifi was only his rebound since he figured he would never be with Haoli (which a nice guy, right?). Once they are outside of the hotel Haoli tells Johnny to be careful because his new friends are known to be working as spies for the Japanese. She believes him to be in league with Bull and Fifi and so do others who now want him dead. 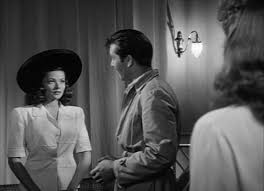 Back at the hotel Johnny makes a strange deal with his army friend to help him set up as the only photographer in the Burma Road and he will cut him in for half of whatever he makes all he needs is equipment. When he gets back to his room Jarubi comes by and has a gun. The dealer tries to get some information out of Johnny and he also tells him everyone wants him dead because they think he is a Japanese spy. Johnny makes the same strange deal with Jarubi that he made with his army friend.
Other crazy weird, unexplained things happen. So many plot holes in this story that I am not going to explain much more except that Johnny and Haoli love each other but for some reason she leaves him to go with her father to a small town to teach children. The school where they are teaching gets bombed repeatedly and her father is killed by falling debris. Johnny makes it to the school before it completely falls apart. Haoli is hit by falling debris and she unfortunately dies.


China Girl was a cluster fuck of epic proportion. One reviewer on IMDB perfectly wrote that China Girl had no idea if it wanted to be a war film, a drama, a spy thriller, or romance. As I said the story had so many unexplained things and plot holes and all that made it tedious to watch after a while. The characters were not very well written which I am surprised because it was written by Ben Hecht and he wrote some of the greatest screenplays and stories. All the actors were stiff in their roles. Fox was doing to Gene Tierney playing the exotic roles when she was from a middle class family in upstate New York like Warner Bros. and MGM had Myrna Loy doing in her early career.  Way to go politically incorrect Old Hollywood. In the muddled mess of a story and characters and not-that-great actors China Girl did have potential. If it had been better written and fleshed out China Girl would have been a decent film instead it is totally forgettable. I only watched this film for Gene Tierney and I only suggest seeing it if you really, really like Gene Tierney.