“Success is a myth. Love's the only true currency. After all this is done, all that really matters is how and who you loved.”

In today’s world we have to much access to so much information about everyone and everything. To sound like an old twenty-eight-year-old fart, I remember when the only technology I had was a shitty Dell laptop, a portable CD player, Napster and/or Limewire, and AOL Instant Messenger. I did not get a cell phone until I was sixteen when I started driving. I did not have a Facebook until I was in my first year of college. I only really started using Instagram last year. I downloaded Snapchat a few months ago but have no damn clue how to use it I just use it to watch my favorite YouTubers and some actors and singers. I got Twitter only a year ago. I do not stalk my favorite celebrities’ social media sites like a lunatic. My Tumblr and other socials are not dedicated solely to one celebrity or band or singer or show.
What I am trying to get at is I am somewhat tech savvy and I do enjoy social media. But I lived without social media most of my life so far and I believe there is a line that needs to be placed when it comes to how certain people use it. The whole Facebook stalking and Googling other people thing are the most annoying to me. If I want to get to know someone I prefer to speak to them. I prefer getting the ball rolling by asking them basic questions such as their favorite bands or movies or shows or places to go. I feel like stalking someone on Facebook or social media or Google is like looking for movie or TV show spoilers. You already know so much about them it is not fun to actually finally see it. The idea of stalking someone on Facebook backfires on a guy in the 2013 movie A Case of You.
Sam (Justin Long) is a writer living in Brooklyn. He writes novelizations of movies that have sold pretty well. Sam wants to write his own story that is not based on a movie. He has a hard time starting it but soon finds his inspiration in a local coffee shop waitress named Birdie (Evan Rachel Wood). One day he finds out that Birdie has been fired but the other employee (hilariously played by Peter Dinklage) tells Sam Birdie’s last name and to look her up on Facebook.
Sam goes home and looks her up and sees what she is interested in. Immediately he begins to listen to the music that she likes, he takes up guitar lessons when he reads her post that she likes guys who play the guitar, and he even reads her favorite books and practically memorizes them. When he finally starts to hang out with Birdie, Sam becomes someone he is definitely not. He is not himself whatsoever and goes along with anything she wants to do and says he likes it as well.

All of Sam’s lying winds up backfiring in his face. He actually has the balls to get mad at Birdie when she takes him to a gallery of her favorite artist with bread and wine and cheese that she likes. And then like an absolute idiot I have no sympathy with Birdie gets back with Sam at the end.
Well, ok, I do have some sympathy for Birdie. It was one hundred percent not her fault that Sam was such a fucking dick to her when he started yelling at her in the gallery. That was such bullshit. I was literally yelling at my TV to Sam that he is the asshole in this scenario he has no right at all to be yelling at Birdie for everything they are doing being her favorite because he was the moron who was not telling the truth and being open with her and communicating the thing he liked.
As I mentioned before I hate the idea of Facebook stalking. I like Facebook I use it to keep in touch with friends and family I do not get to see all the time and I post pictures of places I go and YouTubers I meet mostly for myself as a sort of journal of what I have done. I do not care if people like my posts or not or leave comments unless I ask a question about something. For me it is literally my own timeline of things I have done and can look back on. I have my Facebook set to private so only the people I choose to be my “friends” can see. I am totally and completely not embarrassed or ashamed of the things I post and I am not scared of what people would see (my mom and other family members are “friends” with me I do not post things I would not want them to see). I have it set to private for people like Sam who Facebook stalk. If I do not know you and have not told you about myself that pertain to what I post on Facebook, you do not get to see that. You will get to know me as I want you to and feel comfortable with. I guess my only real fear is people using what I like and post about (seriously, my posts are mostly pictures of me with YouTubers, pictures of my dog, music videos, and ramblings about music and TV shows. Super boring) against me in any way such as to make fun of me or say that is why I do not get work done (which would be false I am always focused on my jobs).
I liked this cast I just wish the plot had been different. I really enjoy Justin Long in movies and I was so looking forward to enjoying him in this and I just totally wound up hating his character. Evan Rachel Wood was very good. So much love goes to Peter Dinklage in his small role at the coffee shop worker. He was hilarious. I would watch an entire movie about that character! If Dinklage’s character had been in the movie more I might have possibly liked it somewhat. Vince Vaughn is also in the movie as Sam’s editor or head of the publishing firm Sam works for. To me Vaughn is a waste of space. I find him incredibly annoying and there was no difference here. 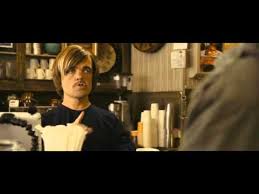 A Case of You was not to my liking if you could not tell from my rants on Facebook stalking and how much of an asshole I think the character of Sam is. However, I am not going to tell you to not watch A Case of You. Maybe you will like it or maybe something will click with you with the story or the characters. You never know.
Posted by UneCinephile at 11:08 PM