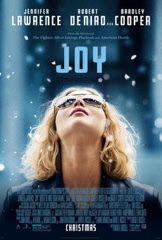 “Don't ever think that the world owes you anything, because it doesn't. The world doesn't owe you a thing.”

It is amazing how much money people can make when they invent something and it takes off and possibly even gets bought by a larger company. I keep crying hearing how much money some companies pay for certain apps. They pay millions and millions and the app’s creators are living a very nice life. Besides apps and technology there are many simple inventions that have been developed over hundreds of years especially in the 20th century. Some of these simple inventions are taken advantage of today. Before the invention of the self-wringing mop mops would have been wrung out by hand. Mops are gross and could even be dangerous. In the movie Joy we get to see how the invention of the self-wringing came to be and how much it changed the life of the inventor.
Joy Mangano (Jennifer Lawrence) is a divorced mother of two living in upstate New York. She can barely afford to pay the mortgage on her house, her mother just stays in her room watching soap operas all day, her grandmother Mi-Mi has been the only one who told Joy she could be anyone she wanted to be, her father has been married countless of times and comes back to her house after he latest wife divorces him, and her ex-husband lives in the basement.
Her father, Rudy (Robert De Niro), almost right away begins seeing this wealthy woman Trudy (Isabella Rossellini). Rudy and Trudy take the whole family out on her late husband’s boat. Wine gets spilled and because Joy is walked all over she is the one left with cleaning up the spilled wine. She winds up cutting her hands on the broken wine glass as she is wringing out the mop. Joy soon gets the idea to invent a self-wringing mop. Rudy has a warehouse where he does his business from and Trudy has a lot of money so she asks them to help back her invention.
Joy soon meet with Neil Walker (Bradley Cooper) the head of the QVC channel. She gets Walker to put her invention on the show with her showing it how it works and not a washed up celebrity the channel has on hand. With Joy explaining and showing the product herself it starts to sell.

Unfortunately, there is an issue. Before she began production Joy had Trudy’s lawyer look into any copyright issues with the product. It was found out that a Japanese man had invented something similar and created parts. Joy uses the man’s parts in her product which she gets through a company out in California. The company starts messing with her and charging her ridiculous amounts. Rudy and her step-sister Peggy blow up any deal that could have been made by paying the company. Joy finds out the manufacturer has been fraudulently charging her for the patent. She winds up going to the manufacturer out in Texas and gets his ass good and owns her product outright. 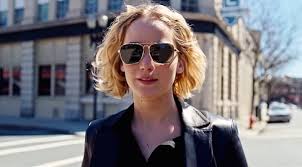 Several years later Joy is a very successful business woman and also invests in other people’s inventions.
Joy was a good movie. It was not that great, I found the story a bit boring. The cast was great. I always enjoy seeing Bradley Cooper and Jennifer Lawrence together in a movie they work so well together. I adore Isabella Rossellini and I had no idea she was in this movie before I started watching it and I got so excited when she came on screen. Joy is worth watching at least once because of the cast and also because it is a bit inspiring to never give up on what you believe in no matter what life throws at you.
Posted by UneCinephile at 11:01 PM