Harry Houdini was a famous magician from the early Twentieth Century. I am sure that you have heard of Houdini at some point in your life. He was the master at creating ways for himself to escape impossible situations such as having himself locked in a straightjacket and a water torture cell. While he most well-known for his magic and illusions, Houdini was also in the movies. From 1918 to the mid-1920s, the magician acted in several films including Haldane of the Secret Service.
A group of bankers in New York City are having issues with counterfeiters. Their banks have become flooded with this fake money and it is ruining their business. One of the bankers includes the eccentric Edward Ormsby. Investigating the counterfeiting ring is Heath Haldane (Houdini) an agent of the Department of Justice. He is working to take down these counterfeiters mostly because his father had been investigating them and he was killed.
While walking down the street Haldane sees a woman running away out of a vehicle. She dropped her bag as she was running into an apartment on the corner. Haldane picks up the bag and looks inside. He sees counterfeit bills. When he goes to the apartment a Chinese servant answers the door. The servant says that the young lady, Adele Ormsby, is not in which Haldane knows is a lie so he knocks the guy around until he gives Haldane what he wants. Haldane is brought into a room to a table by Adele. The servant also comes in and switches out the bags without Haldane knowing. Haldane asks Adele about what is in the bag. Adele pretends not to know and tells him that she was leaving in a hurry and her things are in her bag. When Haldane looks into the bag to prove her wrong he is actually the one that is proven wrong when he sees Adele’s clothes. But to Adele’s surprise Haldane has the money from the bag in his coat pocket.
Adele tries to explain that she was supposed to be marrying a man named Usher. She was not in love with Usher but Ormsby had been very adamant that she marry him. The reason she gave for taking the bag with the money was that she was in a rush out the door. She had heard a gun go off and then a moan. Haldane comes to find that everyone in the house has something to hide and that there are so many mysteries abound inside it.
Later on, Adele informs Haldane that Ormsby came into possession of sacred Chinese plates while in China by having someone steal them for him. She also found a letter with the names of men from the Secret Service.
Doing some reconnaissance, Haldane trails a man named Ivors to a warehouse. He is found by Ivors and his crew and thrown into the river. Adele is on a ship bound for Glasgow and Haldane manages to swim to the ship before it leaves New York. In the warehouse Haldane saw a box with an address in Hull, England stamped on it. Haldane figures that this is the house where the smugglers have been working out to create counterfeit money for all over the world.
The rest of the story gets a bit crazy with a Chinese prince and some speakeasy and monastery in France. Just know that Haldane does find the counterfeiters and that Ormsby and some other bankers were behind the fake money. 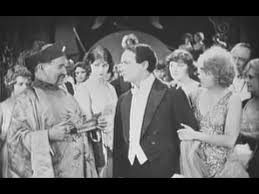 Haldane of the Secret Service is really good. I was hooked to the story from the time it started. As I said, the story gets a little crazy towards the end. In fact, it gets a little crazy almost from the beginning with so many people coming into the picture. Houdini was really good in the lead role. I did not know what to expect with Houdini acting and I was surprised that he was as good as he was. I am actually looking forward to finding some of his other films to watch. I definitely suggest watching Haldane of the Secret Service it was a great mystery. It is currently available to view in full on YouTube.
Posted by UneCinephile at 11:28 PM