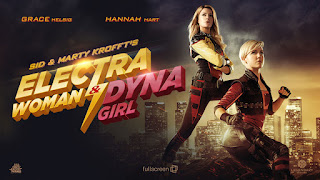 “Electra Woman and Dyna Girl are going to Hollywood!”

Ever since I first saw Sydney Bristow on the TV show Alias fifteen years ago I wanted to be a superhero. Granted, Sydney Bristow is not in any way considered a real superhero in the general sense but to me she always will be. Since I am a huge Jennifer Garner fan I of course HAD to see Elektra and after that it was definitely set in stone I wanted to be a superhero like Elektra and Sydney Bristow! Not only were Sydney and Elektra my role models (who am I kidding at twenty-eight they still are!) they became my standards of what I look for in all female characters not just superhero ones. I like the tough chicks who can kick major ass but also have a fierce attitude, some quick wit, compassion, and passion (to name a few: Sarah Manning from Orphan Black, Agent Carter from Captain America, Elektra from Daredevil on Netflix, Jessica Jones, Amy Pond from Doctor Who, Rosa Diaz from Brooklyn Nine Nine). Fifteen years ago there was not a female character on TV like Sydney Bristow before she came along. In those fifteen years more and more female characters and female superheroes like Sydney have come along. Currently it is amazing to see how much fan support there has been for female superheroes to get their own movies and shows. Jessica Jones is beyond brilliant and dark. Wonder Woman is getting her own movie next year. Super Girl has her own show on the CW. People are petitioning for a Black Widow movie. Agent Carter and Hayley Atwell got so much love.
All these wonderful women came from the traditional medium of TV. Today TV is not so mainstream when it comes to where the younger audiences are getting their entertainment from. One of the most popular sources of entertainment nowadays comes from YouTube and the vloggers who create content on there. I recently came upon this fantastic world of vloggers via Tumblr via Grace Helbig. Helbig and her fellow content creator and best friend Hannah Hart have millions of subscribers and video views behind them. They are part of a new wave of entertainment, celebrity, and influence. When former television producers Sid and Marty Krofft were looking to reboot their 1970s female superhero series Electra Woman and Dyna Girl for the digital space they turned to Helbig and Hart.
Electra Woman and Dyna Girl begins with Judy (Hart) and Lori (Helbig) sitting in their small cramped apartment in Ohio. Lori is watching TV when a commercial comes on for an energy drink starring the most popular superhero Major Vaunt. Lori says out loud that Vaunt is such a sell out for making a commercial while Judy is sitting at the table working on her latest crime fighting gadget. The two of them are dressed up in their homemade spandex superhero suits sitting around. They go out to get slushies and they are just in time to stop a robbery from occurring. The two superheroes calmly walk up to the robbers with Dyna Girl saying “Well hello gentlemen” and taking out her gadget the Dyna Suction. The suction shoots out and grabs a hold of the one robbers arm and gun but it is a little bit too strong and winds up taking the guy’s whole arm off. After that they both punch the other guy out and put them neatly to the side for the police to come and get them. Electra Woman takes the one robber’s cell phone that he had been recording the robbery with and records herself saying a few things.

That night Lori’s phone keeps going off. She gets a message that CMM- Creative Masked Management, a superhero agency- has seen their video and wants them to come to Hollywood for a meeting. Lori is all excited about their meeting while Judy is not as excited. She is hesitant because she does not want anything between them to change. Lori assures that they will always be a team and will not change.

At CMM they meet with the head of the company Dan Dixon (Andy Buckley from The Office). He wants to completely change their costumes, create new backstories for them, and give them some updated gear. Again, Electra Woman is totally game while Dyna Girl is hesitant and also once again Electra Woman manages to talk Dyna Girl into working with the company.

The duo become a huge hit in the superhero world… well Electra Woman does anyway. Dyna Girl is now known as Electra Woman’s sidekick when she did not start off that way. Judy gets pissed and rightly so and makes it be known to Lori. That does not go over very well and Lori tells Judy to “spin off”. When Judy does “spin off” she goes to check out a crime scene to see if she can find the new supervillain that has emerged and created the crime scene. Unfortunately, Judy gets kidnapped by the new supervillain known as Empress of Evil.

Lori finally gets her shit together and sees how much of an ass she was being to Judy when she sees the video of Judy being kidnapped by the Empress of Evil. Lori was so close to saving Judy but she gets knocked out and tied up like her friend by the Empress. Of course they manage to get out of their holds and save the day.

Grace Helbig and Hannah Hart were excellent. I have to say I was a little worried about how their acting would be after having watched them in their first feature movie Camp Takota (along with their other best friend and fellow YouTuber Mamrie Hart from You Deserve Drink) where their acting was alright at best. I was fortunate enough to have seen the first two episodes at StreamCon in October and all my worries about Helbig and Hart’s acting were put to rest. They were so good. In Camp Takota all three YouTubers were acting as themselves for the most part, there really was not a big stretch between their characters and their YouTube selves. But in Electra Woman and Dyna Girl Helbig and Hart were their characters and I was so happy to see that. It was great getting see Helbig as this out going character with some awesome feistiness and Hart being the conscientious superhero. Even though they were playing their characters perfectly there was still some YouTube Hannah Hart and Grace Helbig in them. Hart loves puns so Dyna Girl had some great puns. Helbig has this smirk just before she is about to say something or thinks something is funny or good. Also in the convenience store scene Electra Woman mentions she won a game of Risk which meant the gadget should have been called the Electra Suction not the Dyna Suction. Dyna Girl quips back to her friend that threatening to puke on the board game does not mean she won. Helbig made a video with her brother a few years back where she told the story about how they were playing Risk and he was losing so he tried to puke on the board.
There are two things I greatly hope for with Helbig and Hart as these superheroes: they help to push the idea forward that there is a market for female superheroes and, most importantly, they inspire young women to be tough, thoughtful, and kick ass just like Sydney Bristow and Elektra inspired me to be all those years ago. Electra Woman and Dyna Girl makes me so happy that young women today have awesome superheroes to look up.

The costumes were so freaking amazing. Helbig and Hart in many interviews said that when they were discussing the costumes they did not want them to be sexualized they wanted them to look like they could actually fight and throw a punch in. That is exactly what the costumes looked like. If I were to be a superhero in the movies those are exactly the types of costumes I would want to wear. You can believe these women truly kick bad guy ass. I cannot thank Helbig and Hart and the costume team for making the suits the way they did.
Electra Woman and Dyna Girl is a fun, silly, hilarious superhero movie. Being a superhero and a kick-ass-bad-ass female character fan for so many years it is just incredible to see Grace Helbig and Hannah Hart bringing these types of characters to a younger, wider audience. The whole time watching the movie I thought to myself that if I were fourteen years old watching this now I would be just like I was with Alias and Sydney Bristow without a doubt (which means pictures of EWDG all over my locker and notebooks and posters and pictures all over my room). It is not as dark as Alias or Agent Carter, but EWDG certainly has the heart of both and that is the highest compliment I can give to it. While Electra Woman and Dyna Girl is not a cinematic masterpiece it is something fun and enjoyable to watch. If you are a huge fan of Grace Helbig and Hannah Hart you will surely love the movie (and I am sure you have already seen it a million times just like I have!). If you are a big fan of the superhero genre definitely go check Electra Woman and Dyna Girl.

You can download Electra Woman and Dyna Girl from these sites:
iTunes: https://itunes.apple.com/us/movie/ele...
Amazon: https://www.amazon.com/Electra-Woman-...
Google Play: https://play.google.com/store/movies/...
Also head to electrawomananddynagirl.com to buy the movie there and get some pretty awesome package deals like a limited edition EWDG t-shirt, signed poster by Hannah and Grace, streaming of the movie, bonus features and other cool stuff!