“How could I have known that murder could sometimes smell like honeysuckle?”
Double Indemnity is considered one of the quintessential Noir films. Everything about it screams Noir.
Walter Neff (Fred MacMurray) is an insurance salesman in 1938. One of his clients is a man named Dietrichson with a bored and lonely wife named Phyllis (Barbara Stanwyck). On the way back to his office one day Walter stops by Dietrchson’s house to talk about renewing his car insurance. Dietrichson is not there but Phyllis is and she greets Walter in nothing but a towel wrapped around her. When Phyllis comes downstairs (now fully dressed) Walter is completely taken by her. She asks him about accident insurance without his knowing it because he does not have enough money for it but she does and she can pay it off. Walter sees some shadiness about this plan. The next day he visits the home again and Phyllis tells Walter she often thinks about killing her husband but she never goes through it. Walter is so smitten with Phyllis he tells her he will plan the murder since he knows how they can get the insurance money without making the death look suspicious.

The two plan for weeks when finally the perfect opportunity arises: Dietrichson is going on a business trip and he has to take the train. What makes the whole situation even more perfect is that Dietrichson broke his leg they will make it seem he fell off the train. The plan works even Walter’s coworker, Keyes (Edward G. Robinson), who is known for his thoroughness believes the accident. But after a while Keyes sees through this death and hits the nail on head saying that Phyllis was working with someone else but he does not know who yet.
Everything starts to unravel. Phyllis was never in love with Walter she was just using him for his insurance angle. Walter goes to Phyllis’ house where he will settle everything. She also had her own idea to settle things; she shoots Walter in the shoulder. At that moment she tells him now she really loves him but Walter does not believe her and gets his own revenge.
I am not really sure how I feel about Double Indemnity. It is ranked on AFI’s list of the best one hundred films at number thirty-eight. There are some aspects like the writing by Billy Wilder and Raymond Chandler, Wilder’s directing, Miklos Rosza’s score, the story being told through flashback, and the cinematography can lay claim for it to be a good classic film and as an example of what a Noir film is but not as one of the greatest films ever made. The dialogue and the story was there and the direction was great but I really felt that the acting was not what it could have been from Barbara Stanwyck and Fred MacMurray. Well maybe MacMurray was good he did well going from this nice salesman to falling so hard for a woman that he was willing to commit murder to be with her. Stanwyck I have seen her act better I was not thrilled with her…. and I think I was also really distracted by her awful wig. Just about the only thing I liked about Stanwyck were her clothes which were designed by Edith Head. The only good actor I felt was Edward G. Robinson as Keyes. The question is when did the man ever give a bad performance?

One scene I did like and thought was genius was after Walter throws Dietrichson’s body on the track and Phyllis is waiting for him in the car. When Walter gets in the car Phyllis goes to start it but the car hesitates and does not start right away. Their faces show their paranoia. My mind started racing as to what would happen if the car really did not start as I am sure was what the characters were supposed to be thinking. That was the only time out of the whole film where I was not sure what would happen next and truly engrossed in the film. Double Indemnity is definitely a classic film to watch. Billy Wilder is one of the greatest writers/directors to have graced Hollywood. He made a great film but somewhere it just falls flat. The plot of the story has been seen over and over again but here even though I found the acting was not so great I found it more believable and not as boring because of the actors’ portrayal of the characters. My expectations of Double Indemnity were neither high nor low I really cannot pinpoint exactly why I felt the film was flat. I am sure there is something I am missing; maybe I will give Double Indemnity another chance some time. 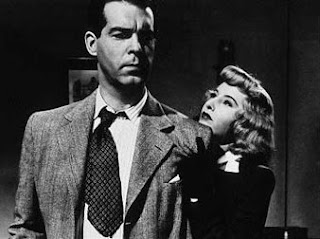 Posted by UneCinephile at 1:56 AM