“Genghis Khan comes back! Genghis Khan leads the East against the world!”
The Mask of Fu Manchu is one of those old “horror” films from the 1930s that is so much fun to laugh at. All I could do while watching this film was laugh.
Fu Manchu (played by Boris Karloff) wants the mask of Genghis Kahn because it apparently has great powers to where he can take over the world. Some British archeologists from The British Museum have also been looking for the mask. One of the archeologists Sir Lionel Barton knows the exact location but he will not tell anyone where it is.  After he talks with his associates Nyland Smith and Terrance “Terry” Granville he gets kidnapped and brought to Fu Manchu’s palace.

Fu Manchu tortures Barton by lying him down under a bell without food and water and sleep for days. Barton’s daughter Sheila has been really worried about him. She tells Terry and Smith that her father has told her where the mask along with a sword is buried. Word gets to Fu Manchu that the mask and sword have been found. He sends a messenger to Sheila, Terry, and Smith that he will give them Barton back is they hand Fu Manchu the mask and sword. Terry decides to give the evil man a replica of each artifact.

Unfortunately Terry has no such luck in fooling Fu Manchu. Fu Manchu has Terry tortured by his sadistic daughter Fah Lo See (Myrna Loy). After she has tortured Terry Manchu injects him with a concoction made of all kinds of venom that will allow Terry’s mind to be controlled. He sends Terry back to convince Sheila and Smith that Barton (who is now dead) now wants the mask and sword moved to a different location. 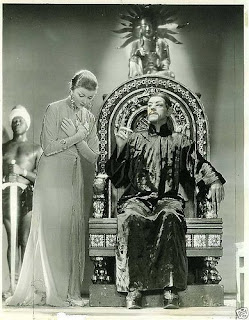 Needless to say the three Britons come very close to the end but with a lot of luck and only six minutes left to the film they save the day and kill Fu Manchu and get the mask and sword.
The plot sounds really good I would go see a film with this plot today but this is part the reason why some old films get a bad rep. The acting was horrible and outrageously overdone especially by Karen Morely who plays Sheila. It was like she was giving her all and it just came out as overacting to the point where it was sad. Of course I had to see this film no matter how corny it was because Myrna Loy is in it and this is when she was still in the vamp/exotic stage of her career. I was cracking up so bad from just seeing her! I will say Loy definitely had the face to play the exotic roles which is funny because she was of English, Welsh, and Scottish descent. What I cracked me up the most with is that Loy is playing a sadistic Asian woman who pretty much rapes Terry by keeping him “entertained.” From the moment Fah Lo See lays eyes on Terry all she has on her mind is having her way with him.  Karloff I have never really seen in any other film besides this but Fu Manchu was a panic he was the corniest part of the whole film. There was one scene in the film where  Manchu was talking about his daughter who is a character not a real person but I was thinking of Loy he was talking to a crowd of people gathered at his palace and he told them to listen to his daughter even though she is “ugly and insignificant.” Then a few scenes later he tells someone that his daughter is beautiful!  With Fu Manchu we know that he is evil because he keeps talking about taking over the world and only leads the captives being carried by one of his followers to their torturous ending but with Fah So Lee we see her sadistic side when she yells for her henchmen to whip Terry and she looks sexualy excited in a twisted way. 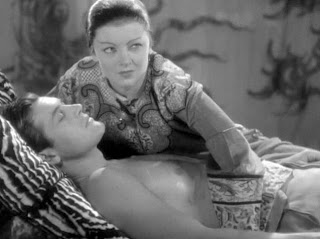 The Mask of Fu Manchu does have some good points despite being really silly in others. Fu Manchu is a very sinister and diabolical character as well as Fah Lo See. Had the script and the acting been a bit better surrounding the two sinister characters the film may not have been so cheesy. The plot is really interesting you can see where Indiana Jones may have been inspired from.
I say sit through The Mask of Fu Manchu at least once especially if you are really into cheesy ‘30s “horror” films or if you want to see Myrna Loy before she broke out of her vamp stereotype. The film is a great laugh.

Posted by UneCinephile at 12:30 PM