“Women don't like noble, self-sacrificing men. Women are not civilized like we are. They like bloodshed. They like forceful men, like me.”
Double Wedding is the seventh film pairing of William Powell and Myrna Loy. The film really does not hold a candle to all the other Powell and Loy outings. The plot is not that great and I found myself just wanting the film to end.
Powell plays a bohemian actor named Charles Lodge who earns his money when he really needs it. He is currently teaching a young couple Irene and Waldo. Irene’s sister Margit Agnew (Loy) is a real bitch (being nice with my description here) she runs every detail of her sister’s life. Charles sees that Margit needs to live a little and not be such a serious person all the time. To get back at Margit and drive her sister crazy Irene says that she no longer loves Waldo but loves Charles who she says she is now going to marry. Charles goes along with the plot as long as it does not go too far. As Charles gets to know Margit he starts to fall in love with her even though she never lets up being a tight ass. Margit even starts to fall in love with Charles which is absolutely no big shock. I am sure you can guess how the film ends.
The plot is a load of crap and sometimes just annoying to follow. 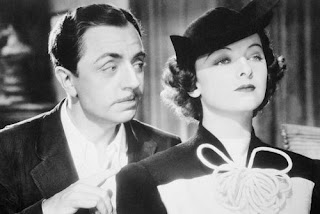 Powell is nothing short of fantastic he was the only one who was tolerable. There was one part that was so perfect for him to play: Charles teaches Waldo how to be a real man since Waldo is a huge pushover. The scene is pretty much William Powell teaching someone to be a gentleman and I cannot think of anyone better to teach a man how to be charming and assertive in a good way. Another scene with Powell that had me cracking up is when Margit is yelling at Charles and he just sticks his pocket watch in his mouth because he is bored and is totally not listening to her. One more Powell scene to mention: he dresses up in a disguise and he looks like Matisse, haha.
Now if you follow my blog or look through a lot of my posts I adore Myrna Loy I never have anything bad to say about her she was always fabulous. This is the first time I did not want to see Loy in any scene I just wanted her to go away! Her acting was great there was nothing wrong on that end but the character as I said is such a bitch!! Margit was an annoying control freak. There really was no reason for us to want her and Charles to get together other than the fact that they are Powell and Loy. She did have some good scenes but they were of course with Powell and when the script called for Margit to be a little nicer and a bit more human. I died laughing when Margit was getting on Charles’ nerves and he literally throws her out of his trailer! I give a lot of credit to Myrna Loy for that but it looked like she was a trooper and had fun.
One of so many excellent scenes between the screen couple can be seen in Double Wedding: Charles is trying to be smooth and loosen Margit up. He goes over to her and touches her arm but she jerks away. I think this is such a good scene for them as actors they just played it so well especially Myrna Loy the way she jerked away and the face she gave Charles.
Double Wedding for me felt like a chore to sit through. I found it to be the weakest out of all the films the pair did together. I really did not like the plot and towards the end it just gets so out of hand and nuts it becomes ridiculous… and not in a good way. In some scenes it even feels like Loy and Powell were just going along and not even really caring.  Watch the film for the fact that it is a William Powell and Myrna Loy film, if you really like them and want to see all their films other than that it is not worth it. 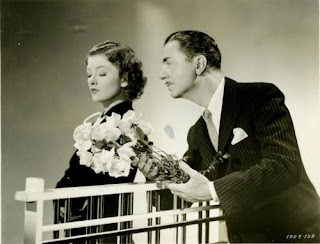 Posted by UneCinephile at 6:54 PM