A League of Their Own

“There’s no crying in baseball!”
A League of Their Own is one of my all time favorite movies. I can quote it all day and never tire of doing so. Pretty much everyone in my family can say one word or line from the movie and we are all off saying the next line. My family is a bunch of baseball fanatics. We are a house divided with two of my brothers and my dad liking the Mets and me, my mom, and another brother liking the Yankees. My grandpa almost got to play for the Mets and Yankees when he was younger. My uncle is a diehard Yankees fan who played a ton of baseball when he was younger. So as you can see we are a big baseball family all around.
As a whole the movie is about the All American Girls Professional Baseball League (AAGPBL) put together during World War II but specifically it is about two sisters from Oregon who are in a local baseball club. The sisters Dottie Hinson and Kit Keller are total opposites: Dottie is gorgeous with all eyes on her and Kit feels like a total outcast and that she is nothing compared to her sister. The sisters argue and fight but deep down they really care for each other; Dottie would not go to try outs unless Kit got to go too. Kit wants to live life but Dottie has a husband she feels she has all she wants in her life that playing baseball is just something to do. These things the sisters want and desire most keep them at odds.

Kit and Dottie are recruited to the Rockford Peaches. They are one of the best teams in the league. The team is managed by former Major League Baseball player Jimmy Dugan. He is a wreck he is always drunk and just does not care about the team. Dottie takes over the first came after Jimmy barges in drunk and pees in the sink! After a while he comes to realize his team has great talent.
The AAGPBL almost gets shut down but as the women in the league begin to show what they can really do game attendance picks up and the league becomes very popular. The first World Series for the league is played between the Peaches and the Racine Belles.
The cast is amazing. It is one of the best casted movies. Geena Davis is incredible as Dottie she makes the character so believable. Tom Hanks is just awesome as Jimmy Dugan from the moment he comes up on screen he is a panic. Madonna pretty much plays herself as Mae Mortabito. Rosie O’Donnell is also a laugh as Mae’s sidekick Doris Murphy. Perhaps the best character of the movie is Stillwell who is the character Evelyn’s son. He makes so much trouble that Jimmy and a couple of the other players want to kill him haha. The rest of the cast is perfect they all do a fantastic job. They all look like ball players.
﻿﻿
﻿﻿

What I really like about A League of Their Own is how it shows a part of American history not many people may know. I certainly did not know that there was a women’s professional baseball league during World War II when all the male ball players had to go overseas to fight. The movie is based off Dottie Kamenshenk who played for the AAGPBL. She played in the league for six years and pitched seventeen shut out games. My uncle got a chance to meet Collins and he said she was really nice and how great it was to sit and talk to her about her time playing baseball.
A League of Their Own is one of the best baseball movies around. It is not about a world class player from the Yankees or about an against all odds story. It is about women coming out of their homes to play a game they love and to say they did something in their lives that they are proud of. They are doing something that men do. The story is also about the nation coming together during tough times. World War II is a fascinating time to study in American history. Everyone was united coming together to help each other. Studying women’s roles and fashion during the war in very interesting.
A League of Their Own is so much fun to watch especially with people who know the movie and you can quote the lines with. To me it is almost movie perfection there is drama and plenty of comedy all excellently played without going over the top in any direction. If you have not seen this movie yet then I have no idea what you are waiting for get going and watch it!! 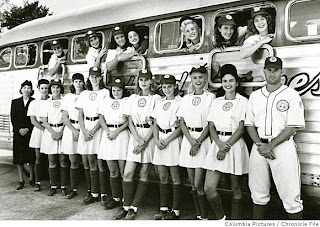 Posted by UneCinephile at 12:19 AM