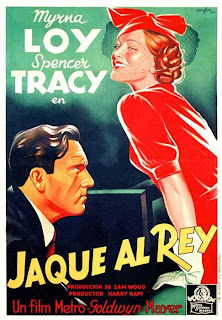 I always enjoy seeing an actor or actress play a character that we are not used to seeing. In Whipsaw we get to see Myrna Loy play a jewel thief while Spencer Tracy is literally the man chasing after/keeping an eye on her.
Vivian Palmer (Loy) is a jewel thief who runs a scam with her boyfriend Ed and his friend Harry. The three separate after the heist but now they have another group of thieves looking for the pearls they stole form them. Vivian heads to New York. Word gets to the New York government that Vivian is in town so they send an agent Mac McBride to go undercover as someone looking to get in on a job with the threesome. Mac poses as Danny Ackerman.
Vivian and Mac try to stay one step ahead of some bad guys who are after Ed. Somewhere along the way Vivian finds out or can tell that Danny is really a government agent. She does not tell him she knows who he is. They both use each other to get to Ed and Harry. The two start to fall in love as well (which should not be totally shocking at all). 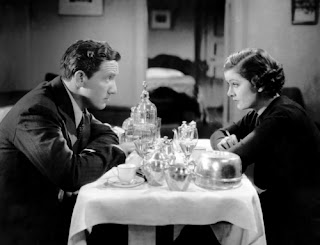 Ed has hidden pearls from the last time the trio pulled off a heist in the handle of Vivian’s brush. She swears she does not know about the pearls’ location and she genuinely does not know. One night her brush falls and the pearls come out. Mac no longer believes Vivian and arrests her.
While trying to take Vivian in she and Mac run into the other group of thieves in a small diner. Mac has Vivian go into the bathroom by smudging dirt on her face. After she leaves Mac starts a gun fight here he is wounded and the thieves die.
You should know the ending: Vivian and Mac fall in love and get together.

Myrna Loy I have to say was alright. Maybe it was the character who was a bit blah but there was not one moment where Loy smiled or looked happy at all except for maybe the end. It seemed like her character had the weight of the world on her shoulders or like Loy was not enjoying herself making the film. Tracy and Loy definitely save Whipsaw from being outrageously boring. It is odd that after Loy’s success in The Thin Man playing comedy that they put her in such a boring story that really did nothing to show more of her range. It was as if they were still trying to find her type and put her in whatever they could. This was Spencer Tracy’s first film at MGM. Tracy had played the same thing over at Fox before he came to MGM so this was not took much of a stretch from what he was used to playing. The following year he would get his type of films changed and be nominated for an Oscar. Loy and Tracy were a good screen couple though you can see their chemistry. One character touch I thought was nice was how Mac called Vivian by her last name throughout the whole film it was like he was keeping his distance from getting to close to her. The story is not too bad but it gets to be a bit much in the middle when Vivian and Mac stay at a farm house. I won’t give it away but one part it was trying to humanize Vivian to show she is not just a crook and has a change of heart about the way she has been living her life.
Whipsaw is not a bad film. It feels slow in some parts and I found others a little confusing. With a stronger script the film could have been even better. I caught Whipsaw on TCM a few weeks ago but I will definitely be buying it on DVD eventually (come on, by now if you follow this blog you should know how much I adore Myrna Loy so I must get it). Watch Whipsaw for the fact that it is a Myrna Loy and Spencer Tracy pairing. 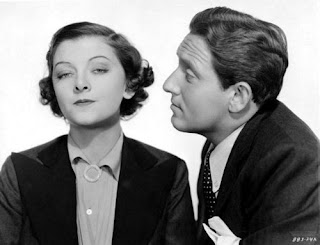 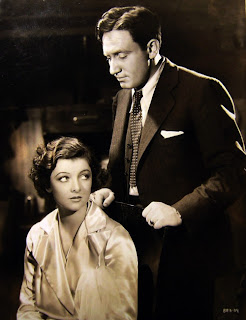