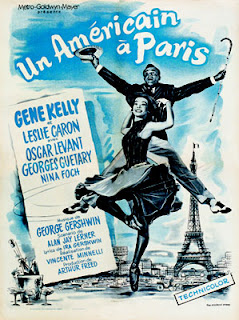 “Maybe Paris has a way of making people forget.”
“Paris? No. Not this city. It's too real and too beautiful to ever let you forget anything”
Goodness I am on a musical kick lately first with Annie Get Your Gun then The Band Wagon and now An American in Paris. Usually I watch musicals when I am in a foul and need something to cheer me up but I have not been in any sort of foul mood or been stressed. Hmmmm… maybe I am still trying to get Insidious out of my mind haha (nah it is not that I got that out of my head a while ago). I do not know what my deal is with musicals lately but I am having so much fun watching them. Today I was in the mood for An American in Paris which I know the reason why which I will explain in a bit.
Gene Kelly plays an American artist named Jerry Mulligan living in France. He enjoys what he does even though he knows he will never make enough money as an artist. He lives above a small café with a concert pianist named Adam Cook (Oscar Levant) living across the way who is also an American.
One afternoon on the corner where he sells his paintings Jerry meets a young rich woman named Milo “as in Venus de” Roberts (Nina Foch). She likes Jerry paintings and buys them all. She invites him back to her place and tells him that she would like to be his sponsor by talking to all the right people and one day holding an exhibition of his work. Jerry does not see the harm in it and he agrees. That night he takes Milo out to small but very crowded night club that he can pay for. As the audience we learn that Milo has a thing for helping out and falling for men who are aspiring artist of any kind.

At the night club Jerry sees a beautiful young girl (Leslie Caron) much to Milo’s annoyance. As they are sitting with Milo’s friends he cannot help but stare at this girl who he found out through eavesdropping her name is Lise. Jerry walks over to the table pretending that he and Lise know each other and asks her to dance. She cannot get over the fact that this man who she does not know at all just came by and scooped her up to dance. When the dance is over he asks for her number, she gives the wrong one but the person whom she is with gives the correct one.
Jerry is very persistent with calling Lise and even stops by the perfume shop she works at. His charm and persistence work and she agrees to meet with him for a date. The two hit it off very well and they begin to see each other.

An odd situation arises when Adam finds out that his friend Henri (Georges Guetary) is engaged to Lise and that Jerry is in love with Lise as well. Jerry and Henri know each other and are friendly but they have no idea that they are in love with the same girl… that is not until they are both at a party one night and Henri just happens to see Lise and Jerry hug and kiss one more time before she is to go away with him to America.
This is one of the many films my mom- excuse me, Santa- bought me for Christmas that I had never seen before. The Christmas I given this film I was also given Gigi… I guess my mom/Santa thought this would put my butt in gear with really cracking down on studying French. I love watching An American in Paris and Gigi because I can brush up on some basic French since je parle français un peu. I get excited when I can understand a few words or a conversation in the film but the French that Gene Kelly and some of the other actors speak is very basic (fun fact: Gene Kelly was a law major and a French minor when he attended college).
I love the story and I really like the cast. Gene Kelly and Leslie Caron were perfect dance partners. This was Caron’s first film and got the part of Lise because Kelly and his wife had seen her in a ballet when they were in Paris and he remembered her. It was a good thing he remembered her because Cyd Charisse was supposed to be Lise originally but she became pregnant and had to back out. I love Charisse but Caron was perfect and she along with Guetary added the authentic French element to the film.
There are some incredible dances in the film. My favorite is the “American in Paris” number. It is like thirteen minutes long but it is so colorful and beautiful. My favorite part of the dance is when Jerry and Lise go to the Lautrec exhibit and they are the paintings come to life. I like Lautrec and it is so cool to see his paintings in action. The best touch was seeing the figure of the woman with the green face from his Moulin Rouge painting. It is awesome to see how they made the effect of green on the woman’s face in the film. I got excited as I always do when I know a piece of art work.

Now the reason why I was in the mood to watch An American in Paris was because I saw my uncle, my grandpa’s brother, yesterday and he loves this film and the music to it. Every time I mention this film in front of my uncle or my grandpa I always hear about how when they were younger my uncle would play this record all the time. My grandpa likes to say in so many words when he would hear the  “An American in Paris” song that he used to have it coming out of his ass along with “Slaughter on Tenth Avenue”. My grandpa also likes to tell me about all the times he would walk into the room he shared with my uncle when they were little and my uncle would have his records all over the place even on my grandpa’s bed and my grandpa would walk in the room, jump on his bed and crack a record.
An American in Paris is one of MGM’s greatest musicals. It was under the Arthur Freed production unit and directed by Vincente Minnelli. You know you are watching an MGM musical because of the amazing direction, production, dancing, sets, and the amazing costumes from the dancing ones to the regular ones. MGM musicals have a fantastic way of lifting you of a rut or inspiring you making you want to be a singer/dancer. An American in Paris is a beautiful, happy love story wrapped up in a fun entertaining musical.
﻿ 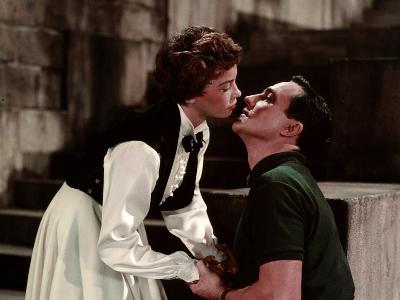