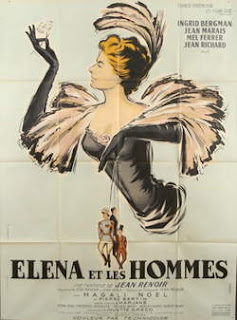 The only foreign films of Ingrid Bergman’s I have seen are some of her Swedish films before she came to America. I still have yet to see her films she made with Roberto Rossellini but I am holding those off for a bit. I did not realize that Bergman’s real comeback film Elena and Her Men was filmed in French before I sat down to watch it. My favorite foreign films come from France. I find that they are extremely passionate about filmmaking and creating good stories for their films. So saying that I find it fitting that Ingrid Bergman who probably has the most passion in her craft as an actress was in a French language film.
Elena (Bergman) is a former Polish princess living in Paris during the 1880s. She has just helped a young pianist create a concert and is set to have it staged. He asks her to marry him and just walks away letting him know is so many ways that she is done with him. This is not the first time Elena has helped a young man out as a patroness or a good luck charm.

Her aunt wants her to marry a rich man named Martin-Michaud. Elena bluntly asks the man when they are going to get married when he comes by the house. Martin-Michaud is only too happy to accept that they are to be married. He takes her in his car down to the crowded streets. It is Bastille Day in the middle of a parade for a general named Rollan and the car gets stuck. Elena is literally swept out of the car as soon as she opens it. She gets shoved and moved throughout the crowed as they excitedly await the sight of the general. Elena pleasantly bumps into a man named Henri (Mel Ferrer). Henri tells her he can take her to personally see the general since he has something to do with the government. Elena meets the general and gives him a daisy for luck which she gives all the men she meets except for Henri.
After Elena gives Rollan the daisy he is asked if he would like to be appointed to the French cabinet by the president. Rollan’s advisors see it as a trap and do not want him to take the position but he takes it anyway. A beautiful girl he has been seeing comes to him at this time, she takes the daisy and throws it on the ground. 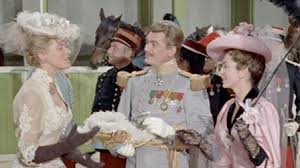 That night Elena and Henri have a fun night out on the town celebrating with other Parisians and drinking wine. In a small café Henri suggests going back to his place and tries to kiss Elena but she backs away. She gets nervous and runs out into the crowd where Henri loses her. When Henri goes to her place sometime later he learns that she has moved to Martin-Michaud’s chateau out in the country. 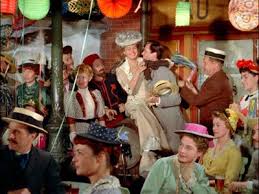 In the meantime, the military’s air balloon carrying a captain has accidentally landed in Germany. The Germans see the captain with his balloon as being a spy. The situation to have the captain released is put up to Rollan. Henri and Rollan’s advisors have not had the chance to really speak to him since he has been constantly seeing Elena at the chateau. Henri travels with the advisors out to the chateau for an engagement dinner and to have Elena and the general sit and speak with each other. Elena is told that she is being given a special assignment to have the general make some kind of agreement with the Germans to release the captain.
From this point on the situation gets a little messy and complicated to explain… mostly because I was starting to lose interest in the film somewhat.
Ingrid Bergman was fabulous. From the first frame she is in to the last she was so beautiful. I loved seeing her in color I did not realize her hair was that light! No matter what language she is speaking be it Swedish, English or French the woman was such an amazing actress. Bergman just commands your attention with her acting. 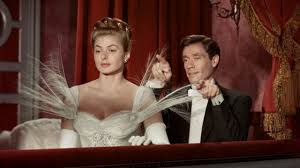 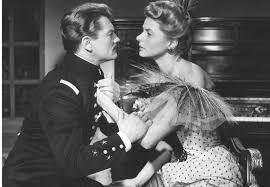 Robert Osbourne said at the end of the film that Ingrid Bergman wanted to work with director Jean Renoir when they were both in Hollywood. He told her that the time was not right for them to work together and that if she were to ever fall he would be there with a net to catch her. Well he came at the right time with his net. Bergman had been working with Rossellini since he did not want her working with any other director but he respected Renoir and let her work with him. This film lead to Bergman getting the part for Anastasia that became her Hollywood comeback.
Mel Ferrer I do not normally care for but I liked him in this film. Maybe because he was speaking French and he looked so handsome in his period costumes.
Elena and Her Men was a good film. There are some scenes that were hysterical and offered a much needed comedic break from the main story. Being filmed in color really enhanced the film it helped to make it more dramatic and comedic. Elena and Her Men as I said is good but it is not a film I would really search for too hard unless you are an Ingrid Bergman fan.